Washington, D.C. (September 5, 2019) — A group of graduate students from the Documentary Filmmaking Department of the New York Film Academy – Los Angeles campus (NYFA-LA) traveled in May to coastal communities in Belize with their undersea video cameras, microphones, and recording equipment to capture Adaptation Fund project activities to conserve and restore the Belize Barrier Reef System, as well as impacts of these actions on ecosystems and livelihoods of local fishers.

A total of six NYFA-LA representatives – four students, a faculty member and a camera technical assistant – made the trip.  Ayu Logan, an NYFA-LA student from New Zealand, shared what she witnessed from the visit: “The local fishermen and their families are working with the (local) organizations, and in doing so combining the different types of knowledge and experience they have to set a great example of ecosystem-based conservation that the rest of the world can learn from.”

The visit was coordinated in partnership between the NYFA-LA, Belize Fisheries Department, the Adaptation Fund and World Bank. The NYFA-LA encourages its students to take a deeper look at topics on good causes which have a strong human connection and to apply their skills to create short films. The filming was designed based on the academy’s philosophy, which provides learning opportunities to students with varying income levels. The Adaptation Fund was a top choice by the academy for this filming activity since the Fund’s mission of helping the most vulnerable communities adapt to climate change is closely aligned to the film program’s intent.

The US$ 6 million Belize Marine Conservation and Climate Adaptation Project (MCCAP) is funded by the Adaptation Fund and implemented by the World Bank in partnership with executing entities from the Belize government as well as the Protected Areas Conservation Trust (PACT), which is also a national implementing entity of the Fund. The project is aimed at empowering vulnerable communities to adapt to climate-induced storm surges and restore natural resources that protect against disasters by implementing priority ecosystem-based marine conservation and climate adaptation measures to strengthen resilience of the Belize Barrier Reef System. The project is providing marine resources and sustainable fishing practices to maintain or increase income levels of local fisheries, targeting 203,000 people living in coastal areas.

“Through productive partnership and collaboration with fishers and community organizations, the Project is empowering them to find jobs that deliver direct benefits while protecting reefs, mangroves, sea grass and tidal marshes.  Through this partnership, Belize is better preserving its marine environment, increasing resilience to climate change and supporting sustainable livelihoods of those who depend on this natural resource – thereby also setting a strong foundation for the country’s transition to a blue economy,” said Ms. Maja Murisic, Environmental Specialist at the World Bank who manages the MCCAP project for the Bank. 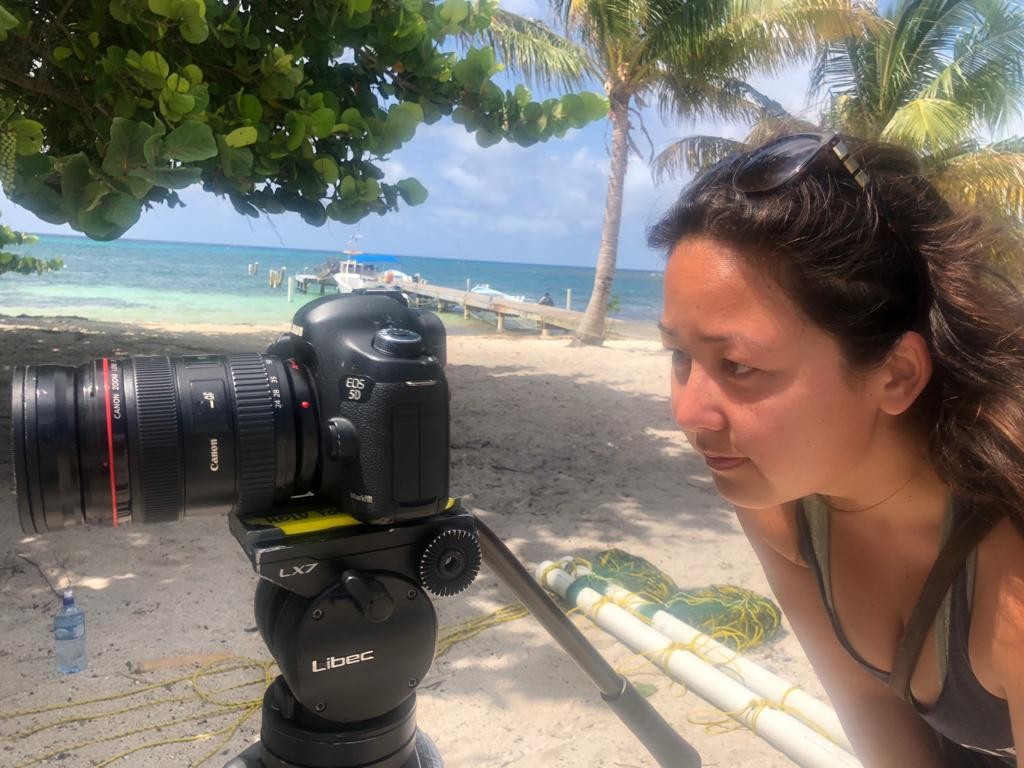 Among the Adaptation Fund’s 94 concrete projects on the ground throughout the globe, the Belize project was of particular interest to the students as it has a strong focus on marine conservation, sustainability, protecting against disasters, and involving youth to enhance education about climate change. “Getting the opportunity to experience first-hand how Adaptation Fund and MCCAP are implementing measures to adapt to climate change and conserve marine life was a beautiful experience,” Logan added. “What is so special about this project is that they not only acknowledge, but have taken into deep consideration how fishing is ingrained in the Belizean way of life.”

With support and facilitation from Belize and the project’s local partners, the team worked together to film the effects of climate change on the fisheries and how the project is working on building climate resilience through different activities. Footage was shot in Turneffe Atoll Marine Reserve, one of the three main Marine Protection areas supported by the project. The students captured footage of deep slope fishermen training, protective mangroves, seaweed cultivation and coral restoration activities. They interviewed local fishermen and beneficiaries of MCCAP’s work as well as staff members from the project’s local partners, including Fragments of Hope and The Nature Conservancy, while learning new types of filmmaking such as undersea camera work.

The filming activity was “one of the most magical and expansive experiences,” said Cassandra Bauer, a NYFA-LA student from Chicago. “I came into this project with not a lot of knowledge behind climate change in general and to be introduced to it in this manner and being able to be so hands-on not only allowed me to become more aware but to also feel like we had a part in documenting a program that is making a real change in this world.”

Jackson McGuire, an NYFA-LA student from Michigan said the filming was a “humbling and inspiring” experience.

“My time with the Adaptation Fund and documentary work for the MCCAP influenced my perspective on conservation,” added Ashley Valsin, an NYFA-LA student from Texas. “The work that is being done shows a necessity for this type of organization and I’m proud that I got to be a part of communicating this need.”

The result of the collaborative effort was four 3-4-minute films highlighting the work of the project, which will be used by the Belize Fisheries Department for their outreach and education purposes and to raise awareness among the larger public for the importance of climate change adaptation.

MCCAP project coordinator in Belize’s national fisheries department Dr. Sandra Grant said the initiative will help foster a better understanding of conservation and climate change. “Sometimes, you have this magnificent story to tell but just don’t know how to tell it. The MCCAP story is about enhancing the climate resilience of the Belize barrier reef,” she said. “The films show how to tell such a story in a way that people in fishing communities can understand and appreciate the work we have done and continue to do. It was an opportunity to educate the Film students about conservation and climate change. And, it was an opportunity for the students to use their skills to tell our story. I am so glad we did. We not only produced a few mini-docs, but we also changed the lives of the students behind the camera.”

“The Belize project is a great example of the Adaptation Fund’s work directed at the local adaptation needs of the most vulnerable communities and empowering them to adapt to climate change. The Fund also has a strong focus on spreading learning and knowledge in adaptation,” said Adaptation Fund Manager Mikko Ollikainen. “This film project by the NYFA-LA students facilitated by the Fund and our implementing partners in Belize highlights both in an excellent and engaging way.”