Decisions Include Expanded Opportunities for Countries via New Funding Windows

Washington, D.C. (October 26, 2021) — The Adaptation Fund continued to deliver more concrete actions to the most vulnerable when its Board approved or cleared more than US$ 42 million in new projects and programmes at the 37th Adaptation Fund Board meeting last week, which was held virtually.

This included approving US$ 16.5 million in new projects and programmes, and technically clearing and setting aside an additional US$ 26 million in other new projects.

Several concrete adaptation projects, in addition to learning and small innovation grants for the Fund’s national implementing entities under Direct Access were approved. The first grant concepts through the Fund’s explicit Enhanced Direct Access (EDA) and Large Innovation Grant windows were also endorsed. These expanded opportunities for countries continue to foster the Fund’s strategic pillars of Action, Innovation, and Learning and Sharing, while reflecting its ability to adapt and evolve to meet the urgency of the climate crisis.

Concrete projects approved included a 13-country regional project in West Africa, and two Direct Access projects in Indonesia that had been previously pending the implementing entity’s reaccreditation. A small innovation grant was also approved in Bhutan, and a learning grant approved in Costa Rica. Another three concrete projects were technically cleared in Haiti, Cote d’Ivoire and Malaysia for approval, but waitlisted temporarily until funding becomes available for multilateral institution projects (the Fund has a policy to safeguard resources for national implementing entity projects under Direct Access, which drives country ownership in adaptation, as well as for regional implementing entity programmes). The Board also endorsed 10 project concepts and pre-concepts that are currently in development.

Meanwhile the new endorsed EDA concept centers on a US$ 5 million proposal in Belize by PACT to build community resilience through transformative adaptation, and the endorsed large innovation grant pre-concept from UNIDO is a US$ 5 million proposal in Uganda and Kenya to unlock investments in female and youth-led early growth stage adaptation via micro, small and medium sized enterprises.

Among other decisions, the Board decided to begin developing a Medium-Term Strategy for 2023-2027, which will build off its current MTS for 2018-2022 and take into account findings from its mid-term review. The review concluded, in part, that the current MTS is a good, fit-for-purpose strategy, ambitious, forward-looking, and responsive to global processes and imperatives for adaptation, reflecting good practices and being fully responsive to the Paris Agreement. It indicated that progress during the first half of the MTS was significant, with the Fund launching seven new funding windows that have received significant responses and enabled it to go beyond past achievements. Attention to quality and project compliance has also increased. 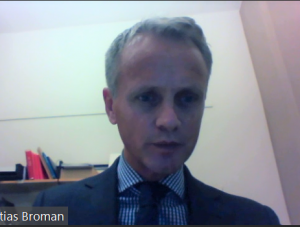 “This was a successful Board meeting and highlighted core strengths of the Adaptation Fund in continuing to deliver concrete actions to those who need it most, and its ability to adapt and expand to meet the needs of vulnerable countries amid the climate crisis and COVID-19 pandemic through implementation of its additional funding windows,” said Adaptation Fund Board Chair Mattias Broman, of Sweden.

“The approval of both regular concrete adaptation projects, as well as several new grants that foster the Fund’s innovation, learning and Enhanced Direct Access windows shows how the Adaptation Fund continues to innovate and swiftly evolve to meet the urgency of the moment and serve the goals of the Paris Agreement,” said Mikko Ollikainen, Head of the Adaptation Fund.

The Board additionally decided to enhance the way it actively interacts with civil society through launching a process by which it seeks to further define such engagement. The Board also decided to further explore complementarity and coherence with the Green Climate Fund through concrete steps while advancing collaborative activities.

Since 2010, the Adaptation Fund has committed nearly US$ 868 million for climate change adaptation and resilience projects and programmes, including 126 concrete, localized projects in the most vulnerable communities of developing countries around the world with 31.5 million total beneficiaries. It also pioneered Direct Access and Enhanced Direct Access, empowering countries to access funding and develop local projects directly through accredited national implementing entities.