Katowice, Poland (December 12, 2018) — In a powerful nod of recognition to the Adaptation Fund’s effective and tangible work on the ground for the most vulnerable countries and a strong signal of raising global ambition for urgently needed adaptation finance, several contributor governments announced new funding commitments to the Fund at its Contributor Dialogue on Dec. 11 at the COP 24 climate change conference.

A single-year record in new pledges, corresponding to about US$ 129 million, were announced to the Fund during the dialogue and subsequently from a total of nine contributor governments, including two first-time contributors of the Fund. This surpassed the Fund’s previous record of US$ 95.9 million set last year.

UNFCCC Executive Secretary Ms. Patricia Espinosa set the tone at the outset of the dialogue. She acknowledged the record demand the Fund has been under, citing a record US$ 264 million in project requests received for its last Board meeting alone, as well as its effective adaptation work on the ground for the most vulnerable communities. “We need to see greater ambition,” she said. “The Adaptation Fund has a vital role to play. It works to bridge one of the most crucial gaps by funding concrete adaptation projects for the most vulnerable countries to climate change. It is also a pioneer through Direct Access in developing country ownership in adaptation. Most importantly it’s about the people, societies and ecosystems that support them. The Adaptation Fund needs more support. Let’s do all we can to ensure the vision, energy and imagination embodied by the Adaptation Fund continues well into the future.”

H.E. Mr. Josaia Voreqe Bainimarama, Prime Minister of Fiji and COP 23 President, also made a call to urgently scale up climate finance. He praised the Fund’s project in Fiji to help vulnerable settlements adapt to climate change and disaster risks. “The Fund has been successful, including in Fiji,” he said. “Many more projects need to be funded, not just in Fiji, but all over the world to communities in need.”

The donation announcements that followed during the event ranged from regular contributors of the Fund to brand new contributors.

Longtime contributor Germany took a big leap forward with a 70 million EUR donation – the largest single donation to the Fund ever. “We believe in the quality and work that the Fund has done,” said Dr. Karsten Sach, Director General, Climate Policy, European and International Policy, Federal Ministry for the Environment, Nature Conservation, Building and Nuclear Safety, of Germany. Sach cited recent independent evaluations that gave the Fund high marks for efficiency, effectiveness and relevance.

Consistently strong contributor Sweden also announced 50 million SEK to the Fund. “Recent extreme weather events around the globe have once again reminded us that climate change is not something in a distant future – it is here and now,” said H.E. Ms. Karolina Skog, Minister for the Environment, Ministry of Environment and Energy, Sweden. “The issue of adaptation is high on our agenda. We hope that our pledge of support sends a clear signal that Sweden stands in solidarity with people and countries particularly affected by climate change. We hope that this pledge will contribute to a positive momentum. The Adaptation Fund plays an important role in climate finance, not least by spearheading the Direct Access Modality, which has proven immensely valuable to build crucial national capacity. Sweden’s objective is to make the Adaptation Fund an integral part of the financial architecture of the Paris Agreement. And we highly appreciate the efforts made by the Adaptation Fund to mainstream gender into project design and implementation.” 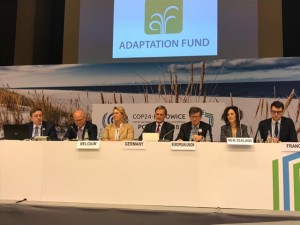 In announcing France’s 15 million EUR contribution, Mr. Adrien Zakhartchouk, Head of Climate, Environment and Agriculture at the French Treasury, said adaptation is a crucial pillar of the Paris Agreement. “We want to demonstrate our support to adaptation,” he said. “Our support [to the Fund] is a signal of support to beneficiaries with catalytic effects on the ground, Direct Access and country ownership and governance that it is working well.”

New funding pledges for the Adaptation Fund were further catalyzed by first-time contributors such as the European Commission, which contributed 10 million EUR. Mr. Mauro Petriccione, Director General of Climate Action for the European Commission, said Europe is committed to stepping up to “support the most vulnerable developing countries,” and trusts that COP24 will take the right decisions to strengthen the Fund so that it can scale up its work.

“It is the first climate finance contribution by the Commission to any climate fund under the UNFCCC and is a great recognition of the Fund’s work,” said Adaptation Fund Manager Mikko Ollikainen.

New Zealand also stepped forward with first-time support for the Fund with NZ$ 3 million, and marked the first time the Fund received a contribution from a government outside of Europe. “New Zealand hears the calls for increased support for adaptation,” said H.E. Mr. James Shaw, Climate Change Minister of the New Zealand Ministry of Foreign Affairs and Trade, during high-level statements the previous day. “The Adaptation Fund is a vital source of small-scale adaptation finance, including for our region, the Pacific. New Zealand’s contribution demonstrates our commitment to the Fund’s ongoing viability and its future under the Paris Agreement.”

Of the Fund’s 28 national implementing entities under Direct Access, 46% are in least developed countries or small island developing states.

Ms. Anna Broadhurst, Head of New Zealand’s Delegation to COP24, reiterated those statements during the dialogue. “We support the Fund’s unique niche in the global climate finance landscape,” she said, adding that they look forward to supporting that niche further during COP24 so the Fund can continue to work on the front lines in helping people adapt to climate change.

In announcing a 4 million EUR pledge, H.E. Mr. Jean-Luc Crucke, Minister for Budget, Finance, Energy, Climate and Airports, of the Walloon Region of Belgium, said, “Wallonia very much appreciates the work of the Fund to the most vulnerable populations. We also very much appreciate regions supporting each other.”

H.E. Ms. Céline Fremault, Minister of Environment and Energy for the Brussels Capital-Region of Belgium, announced a new $400,000 EUR pledge. “Climate change is impacting the most vulnerable countries,” she said. “We need to adapt. The Adaptation Fund will serve the Paris Agreement and must play a crucial role in serving the most vulnerable countries. The innovative Direct Access modality also plays a key successful feature of the Fund. I appreciate the work of the Fund.”

Following its first-time contribution to the Fund last year, Ireland continued with a new contribution this year of 300,000 EUR. “This Fund finances projects and programmes in developing countries to help vulnerable communities to adapt to the impacts of climate change,” said H.E. Mr. Richard Bruton, Ireland’s Minister for Communications, Climate Action and Environment, during the High-Level Segment at COP24 on Dec. 12. “Ireland has been a strong supporter of adaptation action in developing countries.”

“We are extremely grateful and appreciative for the outpouring of support we saw here today. It says a lot about the trust the Fund has built up over the years for its effective adaptation work on the ground for the most vulnerable countries,” said Victor Viñas, Chair of the Adaptation Fund Board. “It pioneered Direct Access, building country ownership in adaptation. The Fund is in higher demand than ever and in need of long-term financial sustainability, so this is urgently needed. Last year, Kyoto Parties formally decided the Fund shall serve the Paris Agreement. We hope more positive decisions to follow, so the Fund can continue to build on its effective work and serve many more vulnerable countries with urgently needed adaptation solutions.”

Ollikainen said the amount of new donations received, the number of donors and new donors reflect both the urgency of adaptation and the increased recognition of the Fund’s effective, innovative and concrete work on the ground for the most vulnerable.

Later, during the dialogue, brief presentations of Fund projects were heard.