Access to water is still limited in many areas of Honduras, with degraded watersheds affected by deforestation and pollution of both surface and ground water. The objective of this USD 5.6M project funded by the Adaptation Fund and implemented by the UNDP is to increase resilience to climate change and water-related risks in the most vulnerable population in Honduras through pilot activities and an overarching intervention to mainstream climate change considerations into water sector policies.

The Adaptation Fund finances concrete climate adaptation and resilience projects in developing countries. Since 2010, The Fund has committed $338.5 million to support 61 countries, including 22 Least Developed Countries and 13 Small Island Developing States. Check out an example — climate adaptation in Honduras. 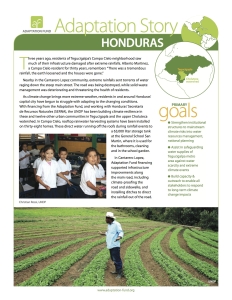