Madrid, Spain (December 5, 2019) — The Adaptation Fund has announced the launch of a new US$ 10 million pilot innovation programme during the COP 25 UN climate conference in Madrid.

The new programme will foster innovation in adaptation in developing countries, and will target a broad range of potential finance recipients, including non-governmental organizations, community groups, young innovators and the private sector. Two of the Fund’s accredited multilateral implementing entities, the United Nations Development Programme (UNDP) and UN Environment Programme (UNEP), will each receive US$ 5 million to administer and aggregate about 45 small grants (up to US$ 250,000 each). UNEP will also work in conjunction with the Climate Technology Centre and Network (CTCN), which is the operational arm of the UNFCCC Technology Mechanism.

The new programme adds a new financing opportunity for the most vulnerable communities under the Fund’s overall Innovation Facility, which includes a recently launched separate innovation grant funding window that is available to accredited national implementing entities (NIEs) under the Fund’s pioneering Direct Access modality that builds country ownership in adaptation.

The new innovation programme and grants are expected to be discussed at the Fund’s side event on innovation at COP 25 on Dec. 6 in Room 4 of the exhibits hall from 1:15-2:45 pm and webcast live here.

The Fund also recently launched new grant funding windows to accelerate project scale-ups and disseminate knowledge of effective adaptation actions — which are available to NIEs. All of these grants are available in addition to the Fund’s regular project funding channels.

“Innovation is one of the three strategic pillars of the Adaptation Fund, alongside Action and Learning and Sharing, and these new funding windows will help foster innovative and effective adaptation practices and tools on the ground to help accelerate the response to climate change,” said Ms. Sylviane Bilgischer, Chair of the Adaptation Fund Board. “Very often Adaptation Fund projects are the first adaptation actions on the ground in many vulnerable places throughout the world, and many of its projects have innovative aspects about them that have established valuable models that are replicable and scalable, and have been scaled up with other funds in several instances. We are trying to further build on these strengths through these new innovative programme offerings.”

The Fund’s Board recently awarded its first two innovation grants to NIEs in Armenia and Chile. The Armenia grant through the Fund’s NIE, the Environmental Project Implementation Unit of the Ministry of Nature Protection (EPIU), is aimed at engaging future leaders through a digital education module for youth on adaptation challenges and crowd-sourced solutions, while the Chile grant, to be implemented by its NIE, the Agencia Chilena de Cooperacion Internacional para el Desarrollo (AGCID), targets improving water access in emergency situations in a vulnerable province of Valparaiso.

“It will be key to strengthening the country’s urban adaptation strategies. The project focuses on improving safe access and will favor a particularly vulnerable group, exposed to drought and difficulty of water delivery through the promotion of innovation,” said Ms. Violeta Leiva Milanca, AGCID program manager.

The Fund’s NIE in Rwanda, the Ministry of Environment, was also recently awarded a new project scale-up grant to build on the successes of its earlier project with the Fund to reduce climate change vulnerability in northwest Rwanda.

Meanwhile, the new innovation programme will provide special financing opportunities to support innovation for adaptation to developing countries that do not yet have NIEs, as well as the private sector. UNDP and UNEP will act as small grant aggregators for innovation, making grants available to a broad scope of stakeholders on a competitive basis. 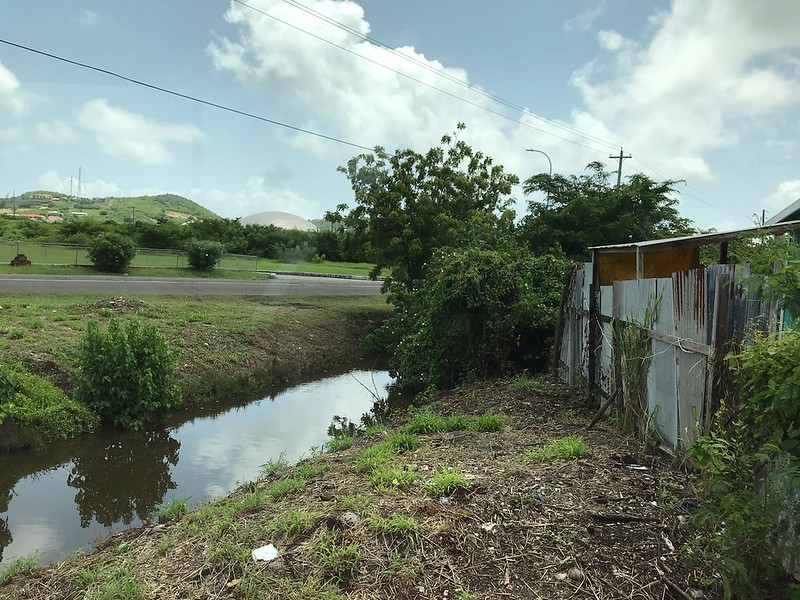 In Antigua and Barbuda, vulnerable homes in McKinnon’s watershed at risk to flooding and mosquito-borne illnesses due to stagnant, blocked canals, which are being restored through AF project to enhance drainage and water flow. (Photo by AF)

“Climate change is the challenge of our generation. Through this exciting new initiative, we can improve the effectiveness of climate change adaptation actions, embrace innovation, engage the private sector and support countries in accelerating the ambition of Nationally Determined Contributions. Taken together, this work will protect vulnerable people from the existential threat posed by climate change,” said Pradeep Kurukulasuriya, Executive Coordinator and Director of Global Environmental Finance at UNDP.

“Investments in nature to boost climate adaptation are among the most cost-effective investments a nation can make. Adaptation innovation is therefore not only about avoiding future losses but also generating positive economic gains, and the Adaptation Fund and our partners are leading the way in making this case,” said Tim Christophersen, Head of the Climate Branch at UNEP.

“Adaptation solutions are instrumental to building resilient, sustainable societies, yet adaptation innovators, including youth, often struggle to find the necessary support to incubate and scale up such solutions. The CTCN is therefore pleased to build upon our existing collaboration with the Adaptation Fund to administer their new innovation small-grants programme,” said Dr. Rose Mwebaza, Director of the Climate Technology Centre & Network (CTCN).

Kenya climate youth activist Elizabeth Wanjiru Wathuti also spoke at the event, saying funding that includes avenues for youth is key to enable their involvement in innovation and are often not costly but worthy investments for the future.

With a portfolio of 100 concrete adaptation projects, the Adaptation Fund has generated results in strengthened resilience of beneficiaries on the ground, but also a body of experience in adaptation. With this, the ground is ripe for exploring ways in which innovative adaptive technologies, techniques and practices can be encouraged and accelerated.

“We want to encourage new approaches and technologies in innovation to help take adaptation to another level, and also create a body of knowledge of what works and what is most effective and appropriate given that these projects are country-led and community-driven,” said Ms. Saliha Dobardzic, who leads the Adaptation Fund’s work on innovation. “Over the last decade, the Adaptation Fund has been at the forefront of the push to transition from “business-as-usual” development to adaptation. Now we are trying to push the envelope even further by identifying innovative opportunities to help advance adaptation efforts more effectively.”

The event at COP25 will focus on the importance of innovation in adaptation, and ways in which it can be further facilitated and accelerated, as well as the importance of youth engagement in projects, and draw upon examples of some of the Fund’s concrete projects on the ground.

“This year alone the Adaptation Fund Board has approved a record US$ 188 million in new projects, and has been in constant high demand as we see the rising urgency of climate change,” said Mr. Mikko Ollikainen, Manager of the Adaptation Fund. “These new innovative funding windows offered through the Innovation Facility and the NIE project scale-up, innovation and learning grants will help to extend the Fund’s reach to countries to help meet this record demand. The Innovation Facility will also offer new opportunities for developing countries to pilot new, relatively untested techniques, technologies and approaches to adaptation, something that can help bring about the transformation that is urgently needed in order to accelerate responses to the impacts of climate change.”

Examples of some of the Fund’s innovative projects on the ground include: