Washington, D.C. (July 25, 2019) — The Adaptation Fund has expanded access to climate finance to more countries that are among the most vulnerable to climate change with the accreditation of two national implementing entities (NIEs) in Zimbabwe and Tuvalu this month.

They represent the 30th and 31st NIEs accredited under the Fund’s pioneering Direct Access modality, which empowers country ownership in adaptation by giving countries the ability to access financing and develop projects directly through the Fund.

The accreditation process also builds national capacity to address climate change as developing countries nominate an organization based in the country itself to become accredited, which in turn must pass rigorous standards to effectively manage projects and foster environmental, social and gender principles.

After recommendations by the Fund’s expert Accreditation Panel (AP), the Adaptation Fund Board decided to accredit the Environmental Management Agency (EMA) of Zimbabwe as the Fund’s 30th NIE on July 1st and the Ministry of Finance and Economic Development (MFED) of Tuvalu as its 31st NIE on July 15.

“We are very pleased to accredit and welcome our new national implementing entities in Zimbabwe and Tuvalu and to see these countries empowered to build their own capacities to adapt to climate change,” said Adaptation Fund Board Chair Ms. Sylviane Bilgischer. “This opens up access to urgently needed climate finance for the most vulnerable communities in these countries through the Adaptation Fund.”

The new accreditations will enable the countries to help address significant climate change challenges they are facing by developing concrete adaptation projects through the Fund.

Zimbabwe faces severe water challenges, including droughts, water scarcity and desertification, as well as land degradation and recurrent floods. They have far-reaching negative impacts on community livelihoods and sectors such as forestry, energy, tourism and agriculture. About 80 percent of the rural population’s livelihoods are dependent on rain-fed agriculture, making them highly vulnerable to climate change and making adaptation a national priority.

EMA’s accreditation in Zimbabwe was supported by the Adaptation Fund’s NIE in Kenya, the National Environment Management Authority, through a South-South Cooperation grant. The Fund provides these important grants through its Readiness Programme to enable NIEs to provide peer support to others in navigating the accreditation process while strengthening countries’ capacities to achieve Direct Access. 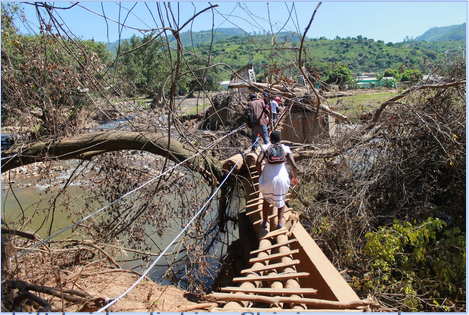 “The EMA of Zimbabwe is delighted for the successful accreditation as the National Implementing Entity for Direct Access of the Adaptation Fund,” said Mr. A. Chigona, EMA’s Director General. “The accreditation is a major milestone as it approves EMA as an entity that has met international standards for corporate governance and project management. It will contribute significantly towards the achievement of goals of the UNFCCC, particularly Zimbabwe’s Nationally Determined Contributions under the Paris Agreement and upscaling of adaptation programmes to enhance resilience and adaptive capacity to climate change.”

Meanwhile, Tuvalu is one of the smallest states in the world and is confronted with sea level rise, coastal erosion and saltwater intrusion, as well as fisheries loss.

The accreditation of MFED in Tuvalu was made under the Adaptation Fund’s groundbreaking streamlined accreditation process for smaller entities, including those from small island developing states or least developed countries, that may not otherwise have access to climate finance. The process upholds the Fund’s accreditation standards while making it simplified and individualized to entities’ capabilities. It marked the fourth occasion the process has been utilized to accredit NIEs. Previously, NIEs in the Cook Islands, Federated States of Micronesia and Armenia were also accredited to the Fund through the streamlined process.

MFED’s accreditation was a successful, collaborative effort of government and regional officials and partners. MFED Senior Aid Adviser Ms. Silaati Tofuola said Direct Access will save the country time and resources that it might otherwise spend to access funding through other types of entities. “This is good news to us as we have put in a lot of effort in the last six years to strengthen our systems and processes to meet the standards and requirements to pass the accreditation assessment,” she said. “We will now be able to access direct funds under the streamlined approach. We are now feeling that strong sense of ownership in capitalizing on this significant assistance from the Adaptation Fund to adapt to the effects of climate change. Since we are on the front lines of vulnerability, building sea walls to protect the whole island is crucial. We have other adaptation projects like renewable energy, empowering women, other infrastructure projects and many others in mind that we need to consult with stakeholders first in the community, civil society and government agencies to get their inputs prior to developing full proposals.”

“Tuvalu is a small island developing state, so it is great to see MFED become accredited through the Adaptation Fund’s streamlined accreditation process – which is really all about opening doors to climate finance for smaller entities in highly vulnerable states,” said Mr. Mikko Ollikainen, Manager of the Adaptation Fund. “MFED’s accreditation follows 14 NIEs in other SIDS and LDCs, and these together represent almost half of all the Fund’s accredited NIEs. This shows that taking full ownership of adaptation actions through accreditation is also fully within reach of these countries that include some of the most vulnerable. It was further great to see EMA in Zimbabwe benefit from peer support through our NIE in Kenya. This is the second example of such south-south support leading to a successful accreditation, the first occurred in Niger with support provided from Senegal’s NIE.”

EMA, an autonomous entity of Zimbabwe’s government within its Ministry of Environment, is responsible for ensuring sustainable management of natural resources and protection of the environment, prevention of pollution and environmental degradation, as well as the preparation of environmental plans, and implements projects at various scales. The AP noted that EMA had “significantly strengthened its policies, procedures and capacity” in many areas over the course of its application despite facing a challenging political and economic environment during recent years where it established itself as an effective and well-regarded institution.

MFED, a ministry in Tuvalu’s government, is linked to the National Development Plan’s strategic area of the economy, growth and stability. Despite its relatively small size, MFED has a significant number of achievements and an ambitious set of public sector improvement priorities. It administers budget support and project funding for Tuvalu from development partners through the Tuvalu Development Fund.