Washington DC, November 12, 2010 – Senegal officials signed on Thursday a memorandum of understanding for the first project to be funded by the Adaptation Fund, established to assist developing countries adjust to the effects of climate change. Developing countries can access the resources from the fund directly, without the intermediation of multilateral development institutions, which is a unique feature evolved by the Adaptation Fund Board and an unprecedented one for an environmental financial mechanism. The Senegalese project, focusing on protecting coastline from the harmful effects of sea level rise with the budget of US$ 8,619,000, is the first one of this kind. 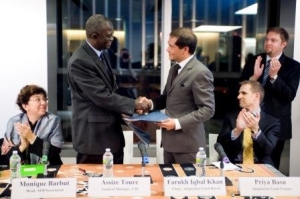 “Coastal areas are one of the main sectors identified as especially vulnerable to the effects of climate change in Senegal. As a result of rising sea level, we are facing floods, erosion, salinization of coastal fields, and degradation of mangrove forests”, said Dr. Assize Toure, General Director of Centre de Suivi Ecologique (CSE), the first accredited national implementing entity of the fund. The project, implemented by CSE, will include protection of communities living along the coastline through both built structures and livelihood development.

The Chair of the Adaptation Fund Board, Mr. Farrukh Iqbal Khan from Pakistan, who signed the memorandum with Dr. Toure, also authorized the first disbursement to be made from the Fund to Senegal. “Direct Access is empowerment, it is capacity building and today, Direct Access is a reality. This event is seminal, not only for the AF, but also for climate finance. The modality for financing provided by the Adaptation Fund is unique and facilitates action on climate change in an unprecedented manner.”

“This first project funded under the direct access path of the Adaptation Fund is a challenge to us”, Dr. Toure said. “But if we succeed, other countries will know that it is doable, and they will follow suit. Several countries have already expressed their interest to learn from the experience of CSE.”

Madam Monique Barbut, Head of the Adaptation Fund Board secretariat, linked the signing of the first direct access project to a renewed faith to the international climate change negotiation process, which has recently looked dim. “This milestone is something that is working here and now and which empowers developing countries wanting to take a more direct role in how they adjust to the reality of climate change.”

The Adaptation Fund is a self-standing fund established under the Kyoto Protocol of the UN Framework Convention on Climate Change, which gets the main part of its funding from a two percent share of proceeds of all Certified Emission Reductions issued under the Protocol’s Clean Development Mechanism projects. The Fund is designed to finance concrete climate change adaptation projects and programs based on the needs, views and priorities of developing countries.