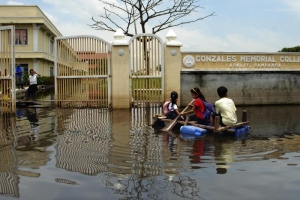 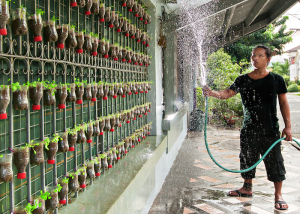 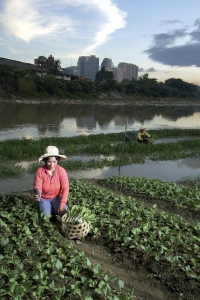 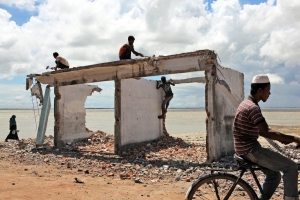 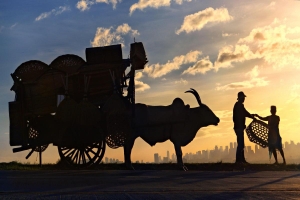 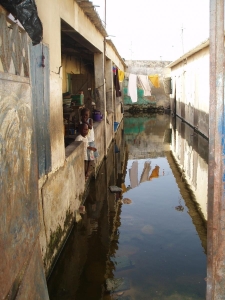 Visualizing climate adaptation and resilience – that was the challenge. Illustrating that theme in urban areas added an extra layer of creative interpretation to our 2013-2014 photo contest. A total of 136 photos were entered in the contest, from 17 countries, spanning the globe from Bangladesh to Brazil, Mexico to South Africa. Today, on Earth Day 2014, humans’ ties to changing climates and the attempts by those affected by climate change are more critical than ever, and will be part of a global dialogue well into the future.

The photo contest panel of four distinguished judges narrowed down the field, and ultimately selected Gina Meneses’ shot of schoolchildren rowing to school in their flooded city of Pampanga, Philippines.

In the photographer’s words: “School kids row their way to school on board an improvised boat made of wood and plastic water containers. Their place suffers from perennial flooding, which started about 2 years ago, when violent storms with heavy rainfall started hitting the Philippines.”

As judge Andrew Smith remarked, “This photo is the best illustration of the contest theme – ‘urban climate adaptation & resilience’. The schoolchildren have adapted to going to school on a boat made of wood and plastic during the flood conditions that they are faced with.”

In the photographer’s words: “The ‘Tambobong’ or the roofed ox cart in the Philippines is a mobile retail store loaded with local handicraft products manufactured by peasants to augment their income from farming where they travel and sell their wares within the urban areas. Instead of using motorcycles as their transport, they are using the cattle which require no demand of fuel, thus, minimizing the pollution. This lady is not just one of the many buyers who chose to use the locally made products to help reduce and avoid the usage of plastic based materials. The use of non-toxic products and eco-friendly materials, that demand less energy to process and transport helps prevent the pollution that results in climate change.”

In judge Andrew Smith’s words: “The silhouette of the vendor and buyer against the skyscrapers of the urban landscape has resulted in an attractive yet informative image.”

In judge Andrew Smith’s words: “This photo doesn’t just show the human impact of urban flooding but also incorporates creative compositional techniques with the walls of the house leading past the children – who are the point of focus – to the clothes drying on the line above the flooded area.”

In the photographer’s words: “Backyard gardening in Manila.”

In judge Andrews Smith’s words: “The photo of plants growing in recycled plastic bottles shows great adaptation to urban living and is complemented by the lighting and the simple composition.”

In the photographer’s words: “Buildings are being taken away, as the river is nearly taking over the place. Bangladesh is a small, yet overpopulated country in Southeast Asia with largely an agro-based economy. Besides climatic hazards like cycles, floods, drought, soil salinity and river erosions are more frequent now a days. These two facts contribute to the increasing number of climate refugees who are forced to shift their usual habitat, worsening the socio-economic problems.”

In the photographer’s words: “Riverside Gardening: Maximizing the space, this couple harvests enough vegetables for their needs and are able to sell some for income.”

In judge Andrew Smith’s words: “This image combines elements of artistry, creativity and information as shown in the three-layered composition. The vegetables and woman in the foreground, the river and man in the mid-ground and the urban buildings that give a sense of place in the background. The combination of these elements results in a powerful yet simple image that illustrates the theme very well.”

In the photographer’s words:“weather, climate everything is changing but we remain the same.”

The distinguished panel of judges included: Andrew Smith, a photojournalist, writer and educator at University of Technology in Jamaica; Dr. Samuel Sidibé, the Director of the National Museum of Mali, one of the foremost contemporary art institutions in the African continent; Tommy Ga Ken Wan, resident photography judge on the Singaporean television show ‘The Big Shot’; and Maíra Erlich, a Brazil-based international award-winning photographer with a background in design.
The semi-finalist photos can be viewed in our Flickr album.