BLOG: Value of Re-Accreditation in Advancing Adaptation Practices on the Ground

BLOG: Value of Re-Accreditation in Advancing Adaptation Practices on the Ground

An AF-funded Direct Access adaptation project in Chile is building resilience to drought and is implemented by the Fund’s national implementing entity in Chile, AGCID, which was reaccredited with the Fund last year.

BLOG:  Value of Re-Accreditation in Advancing Adaptation Practices on the Ground

Washington, D.C. (October 27, 2020) — Re-accreditation of the Adaptation Fund’s (AF’s) implementing entities (IEs) may sound like an esoteric institutional process, but in reality it is a reflection of the high value placed on the Fund’s work by its growing community of implementing partners around the world – which has grown to more than 50 to date.

As of early October, 27 of the Fund’s entities have elected to ‘reup’ with the Fund by going through the re-accreditation process — which is required every five years. Some entities have even already gone through it twice, showing their commitment to the Fund and dedication to fighting climate change. So far, all entities whose re-accreditation time has come up, have opted to move forward with the process.

Many benefit greatly from the re-accreditation process by reviewing and learning from continually evolving procedures such as the Fund’s progressive environmental, social and gender policies that promote human rights, biodiversity, equal opportunity for women and men, and empowering the most vulnerable groups.  And, it ultimately serves to enhance adaptation actions on the ground for the most vulnerable communities.

Achieving re-accreditation with AF also strengthens the institutional capacities of IEs by consolidating internal fiduciary and financial management systems, project management, transparency and complaint handling mechanisms. When IEs get re-accredited, they can submit new funding proposals for concrete adaptation and resilience projects and programmes in developing countries, participate in AF learning and sharing activities, and be included in relevant AF communications. 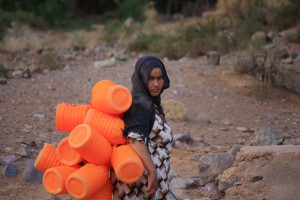 Adaptation Fund project in Morocco, in which the NIE, ADA, was reaccredited in 2017.

The duration it takes for implementing entities to complete the re-accreditation process  varies from one IE to the other and depends on many factors, including an IE’s ability to submit a comprehensive application and provide prompt responses to  review questions raised by AF’s Accreditation Panel.

Established by the Fund’s Board, the panel consists of four independent experts and two Board members who review and assess accreditation and re-accreditation applications and provide recommendations to the full Board on whether entities meet fiduciary standards and should be approved.

Between 2019 and 2020 alone, a total of 13 implementing entities have been re-accredited, including the United Nations World Food Programme (WFP), the Sahara and Sahel Observatory (OSS) and most recently UN-Habitat. The first re-accreditation of the WFP in 2015 subsequently helped them submit funding proposals for three concrete adaptation food security projects in Malawi, the Republic of Congo and Lesotho, which are expected to benefit over 1.6 million people. Through these projects, the Fund is helping improve access to integrated climate risk management strategies and structured market opportunities, as well as building adaptive capacity to climate change in vulnerable communities.

Two regional Disaster Risk Reduction projects funded by AF currently under implementation by OSS are also helping to strengthen drought resilience for small holder farmers and pastoralists in the IGAD Region of eastern Africa, as well as establish a Multi-Risk Early Warning System to strengthen resilience of ecosystems and improve livelihoods within the central African W-Arly-Pendjari (WAP) Complex.

The March 2020 Adaptation Fund Board decision to intersessionally re-accredit the National Fund for Environment and Climate (FNEC) as the NIE for Benin also re-affirms the Fund’s pioneering role in direct access, and further reinforces the importance of country ownership and building national capacity in adaptation. Benin is additionally a least developed country (LDC), one of 16 LDCs or small island developing states among the Fund’s 32 NIEs accredited to date – reflecting the Fund’s focus on empowering the most vulnerable.

Further building on its national capacity and ownership in adaptation through the re-accreditation process has indeed been empowering for FNEC. “Thanks to the re-accreditation, the FNEC has become at the national level, one of the flagship structures of good governance endowed with all the bodies required by its decree, and which is functioning well,” said Mathieu Biaou, FNEC’s Director of Mobilization of Financial Resources.

Among FNEC’s lessons learned through the re-accreditation process, according to Biaou, were that it enabled them to keep a watchful eye on good governance; document all its management and operating procedures; conform all its policies to internationally recognized standards; operate all its structures effectively; prepare and certify financial statements; adopt a zero fraud policy; set up various procurement bodies; and establish permanent capacity building of managers in all aspects related to FNEC’s national missions.

The work has been worth it, particularly when it comes to ensuring effective adaptation actions going forward. To date, of the Fund’s 105 concrete projects on the ground, 32 are being implemented by NIEs through Direct Access.

“Rather than being straightforward, the re-accreditation process is much more complex,” Biaou added. “In this process, the entity is called upon to justify its entire operation and to justify on a factual basis the implementation of all the governance documents developed. It must demonstrate that all the conditions and reservations made during the accreditation are lifted. All in all, it is a process that puts all of an entity’s staff on standby and ensures zero tolerance for fraud or corruption.”

Meanwhile, the Development Bank of Latin America (CAF) is the latest RIE in Latin America and the Caribbean to achieve fast-track re-accreditation with the Fund. This puts the total number of AF re-accredited implementing entities in the region to six. These seemingly ‘internal’ re-accreditation processes in turn feed into tangible and effective actions on the ground.

Since March 2017, CAF has been implementing over $33 million in AF-funded adaptation grants for two regional projects in Argentina and Uruguay, and Chile and Ecuador, and two national projects in Ecuador and Peru. Though the projects are in their early stages of implementation, the expected adaptation impacts are immense. The regional disaster risk reduction project in Argentina and Uruguay, for instance, aims to build climate change and variability resilience in vulnerable coastal communities and ecosystems of the lower Uruguay river, and promote institutional strengthening in land management public policies, plans and programs for vulnerable cities and ecosystems. 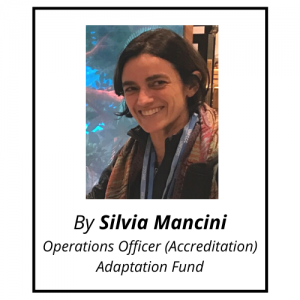 The Fund’s re-accreditation process has twin benefits. At the AF level, it helps the Fund deepen partnerships with its implementing entities for transformative climate adaptation and resilience projects and programmes in developing countries. At the level of the entities, the process further strengthens institutional capacities and organizational systems and ensures that project funding continues to be effectively and efficiently managed by implementing entities on the ground.