In Morocco, over 1.7 million people who are largely dependent on agriculture and livestock have been challenged by extreme dry weather, recurrent droughts, water scarcity, unsustainable use of water resources and forced seasonal migrations. As a result of the degrading ecosystem, locals who depend on the Moroccan oases are currently facing the additional challenge of climate change, which may bring with it even greater constraints.

Read the Adaptation Story to learn more on how this Adaptation Fund project “Climate change adaptation project in oasis zones (PACC-ZO)” helps vulnerable populations become resilient to drought by turning to a traditional system of underground water canals first developed by the indigenous Berber people of the region. 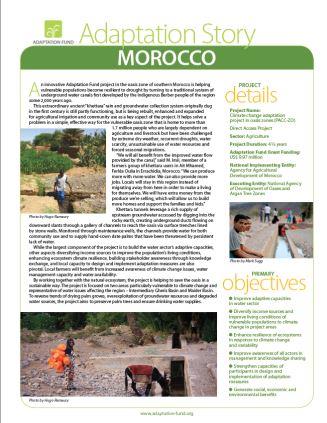