A climate adaptation project, which promotes transformative farming techniques and enhances resilience through early warnings for extreme weather on the banks of the River Nile, is being replicated and extended.

The programmes, “Building Resilient Food Security Systems to Benefit the Southern Egypt Region” and phase 2 by the same name, are financed by the Adaptation Fund (AF) and aim to support the livelihoods of smallholder farmers in the face of climate change.

Egypt faces significant socioeconomic challenges and is vulnerable to the impacts of climate change. This is particularly the case for Assiut, Sohag, Qena, Luxor, and Aswan; the five Southern governates at the heart of the two projects.

According to a report by the World Food Programme’s Egypt Country Office, the Southern region alone stands to lose up to 30% of its food production by 2050 as a result of reduced crop and livestock productivity, drought, and pest infestation, all of which are rooted in rising temperatures and unpredictable weather. Implemented by the United Nations World Food Programme, the projects target these issues. 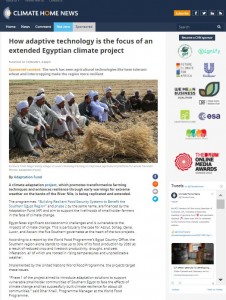 The Adaptation Fund visited the project in 2017, and its implementation was completed last year. It was a successful project, as the project finalisation documents showed that the implementers were able to overachieve on most of its set targets and metrics.

“My life differed a lot from the past since I started working on tomato drying,” said Aisha Abdelfattah, a Luxor-based farmer, adding, “the project helped me and many other people of the region to work in different fields to help them increase their income.”