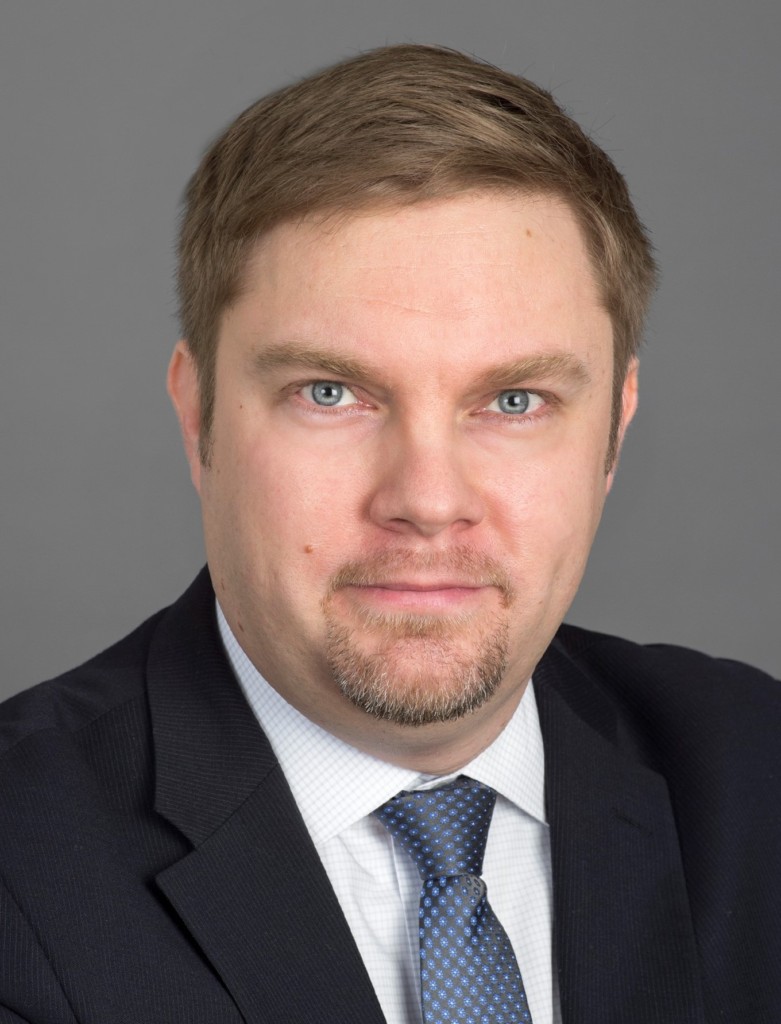 The heart of the Adaptation Fund’s effectiveness remains its work on the ground in funding concrete projects that help vulnerable communities in developing countries adapt and build resilience to climate change.

I have seen several impressive results of this first-hand during our portfolio monitoring visits in such places as Mongolia, where ecosystem-based adaptation techniques are helping rural farmers conserve water; Turkmenistan, where policy and community-based adaptation is strengthening water delivery services; and Georgia, where national and local flood management efforts are paving the way to inspire positive change.

The strength of the Adaptation Fund in innovating new approaches could be seen in each location. Water-saving irrigation practices, pasture rotation and organic gardening is increasing climate-smart use of land in Mongolia, while intercropping, terracing, drip irrigation and canal improvements are strengthening water management in Turkmenistan.

And my most recent visit this June to our project culminating in Georgia summed up the tremendous value of the Fund’s work. Many impoverished residents in the Rioni River Basin had been challenged by increasing rainfall, landslides and severe floods in recent years due to climate change and unsustainable land use practices. The project, funded by the Adaptation Fund and implemented by UNDP with Georgia’s Ministry of Environment and Natural Resources Protection, introduced national floodplain policies, flood mapping, climate-resilient flood management practices and early warning systems that have improved communities’ adaptive capacities and reduced their vulnerabilities. With support from the project, the government has produced substantial results on the ground with not only great concrete work supporting the communities, but increased national understanding of the hazards of climate change. It has led to development of a follow-on project with another climate fund that will scale up these actions, and the government drawing upon some of the project’s experiences in their recovery work following the catastrophic 2015 Tbilisi floods. 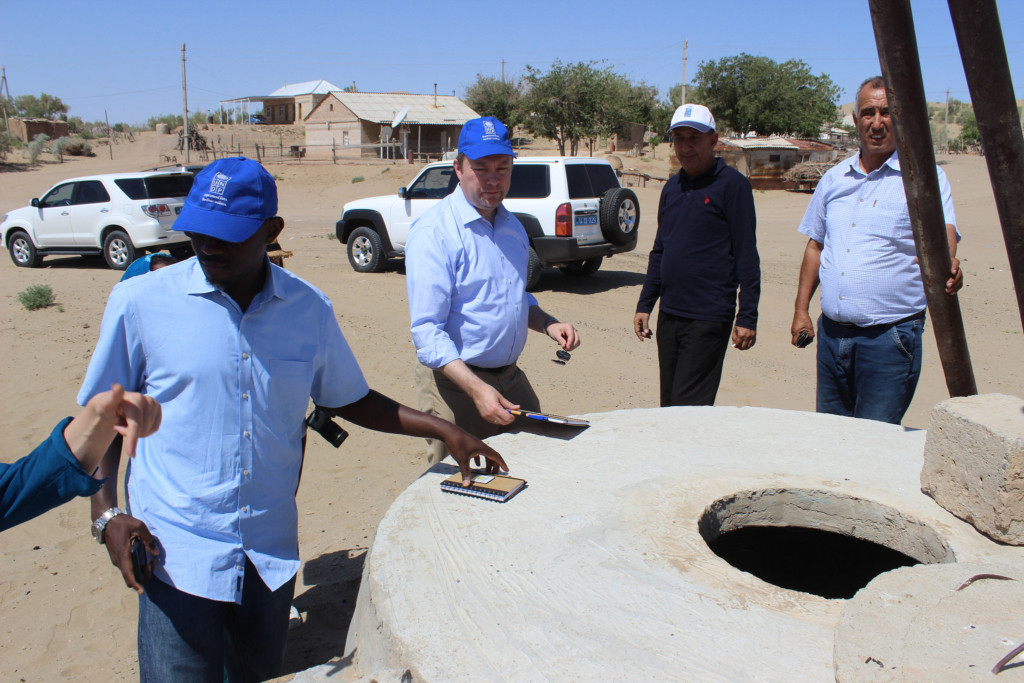 This is what the Adaptation Fund is all about—pioneering new types of activities to address the urgency of climate change in vulnerable areas and gathering experiences that can be replicated or scaled up with additional resources, while at the same time producing immediate results that help communities adapt to their very real adaptation challenges.

It’s one of the great successes of this project. It delivered trainings and approaches that work in practical ways and the communities saw that they really work. It introduced new sustainable tools so they can protect themselves and adapt. You see this across the Adaptation Fund’s portfolio, which has steadily grown to US$ 436 million now committed to 66 concrete projects in 54 countries serving more than 5.4 million direct beneficiaries. Projects are country-led with an inclusive stakeholder consultation process so that the most pressing climate vulnerabilities are being addressed. 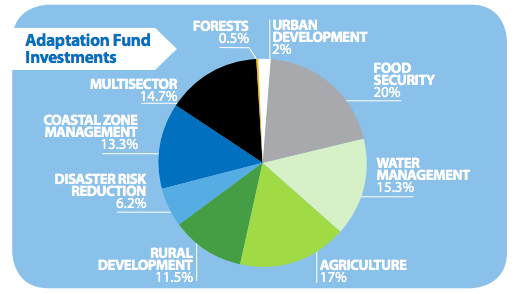 Adaptation Fund investments per project sector as of October 2017

Direct Access remains the Fund’s pioneering hallmark program, giving developing countries the opportunity to access climate finance and develop projects directly through accredited national implementing entities (NIEs) while building their own adaptive capacities. It has been heartening to hear, time and time again, the testimonies from NIEs and their corresponding governments, about the significance of getting to truly and completely be in the driver’s seat of their own climate adaptation efforts. The indirect effects of this empowerment have been simply staggering. For instance in India, the trust put by the Adaptation Fund in the National Bank for Agriculture and Rural Development (NABARD), the accredited NIE for that country, prompted the government to additionally entrust NABARD with the management of India’s own national adaptation fund.

The Adaptation Fund has accredited 25 NIEs to date (along with 18 multilateral and regional implementing entities), and Direct Access has since been emulated by other climate funds—allowing NIEs to be fast-tracked to additional accreditations and resources.

The Adaptation Fund remains in high demand, with a record US$ 60.3 million in new funding approved for projects at its March 2017 Board meeting alone, and has gained considerable momentum within the international climate finance landscape. It reached or nearly attained its annual resource mobilization goals the last two years during critical climate change conferences in Paris and Morocco. Its inclusion in the accompanying language of the landmark Paris Agreement signaled growing recognition for the Fund’s work. That was strengthened further last year in Morocco when conference parties agreed the Fund ‘should’ serve the agreement. Preparatory work is well underway to try to make that happen in the near future.

Meanwhile, the Fund continues to innovate and adapt to countries’ needs. Its Environmental and Social Policy adopted in 2013 has been ahead of the curve in promoting human rights, gender equality, marginalized groups, climate action and biodiversity in its projects. The policy was praised by the United Nations Special Rapporteur on Human Rights and the Environment as a possible international model for similar principles called for in the Paris Agreement.

The Adaptation Fund’s alternative, streamlined accreditation process created in 2015 has opened doors to climate finance for smaller entities—with three NIEs since being accredited through the process. Its Funding Window for Regional Projects to address climate issues that cross borders has also grown rapidly, with three regional projects approved since it was established in 2015.

The Fund also pioneered ‘Enhanced Direct Access’, which has been implemented, for instance, through a small grants facility project in South Africa empowering national institutions with further autonomy to identify and fund local adaptation projects. Nearly 3,000 people are benefitting from climate resilient livelihoods, climate smart agriculture and climate-proofed infrastructure through the Fund’s NIE, the South African National Biodiversity Institute, which has also developed a follow-up project concept for the Green Climate Fund to further expand the facility’s work.

With a newly approved Knowledge Management Strategy and a growing Climate Finance Readiness Programme, the Fund is expanding its knowledge sharing platforms while providing small technical assistance and south to south grants that help build institutional capacities through seminars and webinars that bring NIEs together to share experiences and lessons in adaptation practice and finance.

Just this July we held our 4th annual global NIE seminar, this time in a partner country—Costa Rica—for the first time rather than at our Washington, DC headquarters. We co-hosted with our accredited NIE in Costa Rica, Fundecooperación para el Desarrollo Sostenible, and more than 20 NIEs attended. The experience was invaluable in furthering our NIE network, and we also visited the Fund’s innovative multi-sector project in Costa Rica that is enabling localized adaptation solutions to reach many at risk communities in the agriculture, water resources and coastal sectors.

The Adaptation Fund is making a difference. The first phase of an Independent Evaluation showed it to be effective, efficient and relevant, as well as a learning institution that shares new innovations. It continues to expand its funding sources, as well. Although it initially relied principally on a share of proceeds of carbon emission reduction sales from the UNFCCC Clean Development Mechanism, it has increasingly turned to generous contributions from developed countries to compensate for the drop in carbon prices in 2011. Full integration into the Paris Agreement and maximizing all potential public and private funding streams would complement these efforts well.

As the Fund continues to grow and its financial sustainability is strengthened, we hope to continue to reach many more vulnerable communities with innovative adaptation solutions. With a massive amount of global adaptation needs, the Adaptation Fund’s concrete actions are as relevant and needed today than ever. 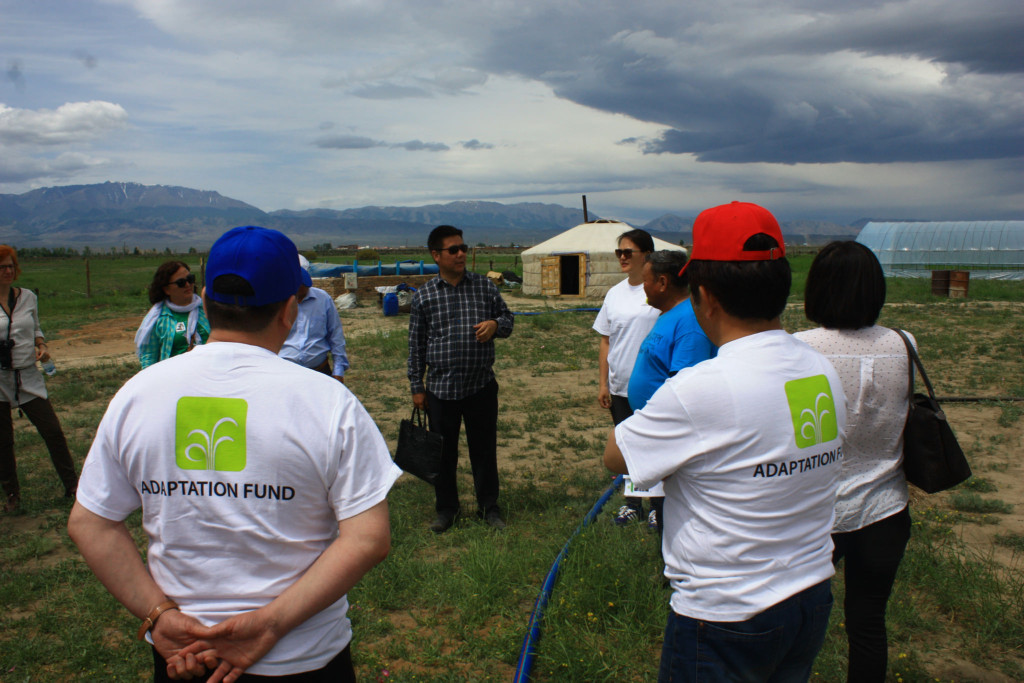