The study examines the importance of intersectional approaches and the value they add to implementing gender mainstreaming strategies and practices to adaptation interventions to enhance resilience of vulnerable women and communities.

The release also coincides with the UN’s theme for observing IWD this year, “Gender equality today for a sustainable tomorrow”. The UN calls 2022 a pivotal year for achieving gender equality in the context of climate change, environmental and disaster risk reduction, and honors women and girls leading the charge on climate change adaptation and response, and their contributions toward a sustainable future.

“The Adaptation Fund is honored to celebrate women and girls and their remarkable contributions to climate change adaptation as we commemorate International Women’s Day. The Fund has progressive gender policies and action plans that foster equal opportunity among women and men, and empowerment of women and girls, and its projects put those words into action on the ground. This new comprehensive study further shows that intersectionality can be used as an invaluable analytical lens and powerful tool towards recognizing nuanced vulnerabilities and building more equitable and responsive interventions,” said Mattias Broman, Chair of the Adaptation Fund Board, who also represents Sweden which has been a strong supporter of women’s empowerment for many years. “The Adaptation Fund has committed to promoting gender equality through its policies and practical actions with a strong belief that gender equality is a necessary foundation for a sustainable and resilient world.”

Intersectionality refers to how gender overlaps with other sociocultural factors. Based on information captured by literature reviews including case studies, the study offers several key findings. In addition to existing gender inequalities, some women face major social inequalities caused by different sociocultural factors including race, ethnicity, disability, and age. By exploring gender’s interactions with such other factors of social differentiation, intersectional approaches have illuminated these ‘double discrimination’ circumstances such as of being a woman from a marginalized ethnic community that would otherwise not be visible through a traditional gender mainstreaming lens. The study uses several case examples from development and humanitarian organizations to examine how intersectional approaches have been applied at both the policy framing level and in practice. For example, the Adaptation Fund has incorporated the concept of intersectionality into gender mainstreaming by framing and highlighting it in its policies such as the Fund’s Environmental and Social Policy (ESP). It articulates the need for gathering gender-disaggregated data in adaptation-relevant interventions, and the importance of such approaches to understand gender complexity. 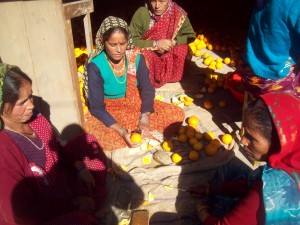 The study further details adaptation sector-specific examples, including in agriculture and food security, forests and forest management, disaster risk reduction, water management, and health. The study found while there is no single approach to integrating intersectionality in gender mainstreaming in adaptation-relevant interventions, the concept of intersectionality has been used effectively in different contexts, which helps to understand wider structural inequalities.

“Despite an increasing attention to intersectional approaches and how they can complement or strengthen the implementation of gender mainstreaming policies and strategies, intersectionality is a relatively new and still evolving concept in both gender mainstreaming and climate change adaptation actions,” said Ms. Young Hee Lee, the Adaptation Fund’s gender focal point who coordinated the study. “Intersectional understanding of gender would facilitate more informed interventions based on a more nuanced approach compared to conventional analysis. For example, if a project identifies a specific group of women, such as women from indigenous and/or natural resource-dependent communities, who are primarily responsible for safeguarding natural resources, then the project must address the particular barriers that specifically hinder them from fully participating and benefiting from relevant interventions. Furthermore, in ensuring full and equitable benefit and participation, adaptation-relevant interventions should explore differentiated interests and incentives for women of different groups based on their ethnicity, socio-economic status, and age.”

By facilitating transition from a narrow focus on gender to broader sociocultural and institutional changes, intersectional approaches allow policymakers and practitioners to create more inclusive and equitable policies, services, and programmes to address inequalities that intersect with gender at multiple scales. Intersectionality is especially important in risk management for marginalized and vulnerable groups as it helps to analyze multi-dimensional and intersecting gender vulnerabilities.

The study provided lessons learned from cases where intersectional approaches were applied and practical recommendations on how to apply them in adaptation-relevant interventions. Even though there is no standardized approach, common themes emerged that prove the effectiveness of using such approaches in finding the nature of multi-dimensional and intersecting gendered vulnerabilities to climate change and deepening understanding of particular vulnerabilities people experience, and available adaptation strategies.

“Intersectional approaches can help better understand and address nuanced vulnerabilities and capacities of women and girls, men and boys, and build more responsive, targeted, and tailored gender interventions which will lead to more inclusive, equitable, effective, and sustainable adaptation outcomes and impacts,” Lee added. “Due to the multi-layered complexities of intersectionality, characteristics of intersectional difference may not be comprehensively identified and addressed in one intervention. But incorporation of any additional intersectional lenses would advance understanding of gendered vulnerability and resilience beyond static perceptions. The study suggests viewing gender intersectional approaches as ‘process or pathways’ toward greater understanding and inclusion as well as better informed interventions based on a more nuanced approach. Major actors and stakeholders will benefit from intersectional approaches in accelerating and strengthening gender mainstreaming efforts to adapt to climate change impacts toward sustainable, more effective and equitable adaptation outcomes and impacts.”

Documenting lessons learned and best practices from projects and programmes that use intersectional approaches will help generate valuable knowledge and experience that can be used for future adaptation interventions, the study concluded.

Intersectional approaches in gender mainstreaming are acknowledged by the Fund’s Gender Policy and Gender Action Plan  which was approved several years ago and updated last year.  The updated Policy and Plan indicates the need and value in applying intersectional analyses in addressing gender-related differences in vulnerability, understanding complexities and systemic barriers to opportunities and root causes of inequality.

Since 2010, the Adaptation Fund has committed nearly US$ 878 million for climate change adaptation and resilience projects and programmes, including 129 concrete, localized projects in the most vulnerable communities of developing countries around the world with 33 million total beneficiaries. It also pioneered Direct Access and Enhanced Direct Access, empowering countries to access funding and develop local projects directly through accredited national implementing entities.