People living around one of the community-protected areas make roof fronds out of leaves, toothpicks and sticks as part of a project funded by the AF and implemented by UN Environment to help people build alternative livelihoods and decrease logging in Cambodia. (Photo by UN Environment)

Titled Local Leadership in Adaptation Finance: Learning from Locally-Led Action in AF Projects and Programmes, the study was produced by AF to contribute toward an ongoing collaboration between the Fund and the Global Commission on Adaptation (GCA) aimed at furthering urgent, bold and equitable climate action. GCA launched a ‘Year of Action’ last year to encourage development, acceleration and scale up of adaptation actions — with LLA being one of the key sectors of focus. AF is among several partners in the Locally Led Action Track, which calls for increases in funding and empowering of local groups, and collaboration among international climate funders, multilateral organizations, governments and CSOs.

The study is also aligned with the Learning and Sharing  pillar of the Fund’s five-year Medium-Term Strategy, which is focused on accelerating tools and resources for vulnerable countries to scale up effective projects, disseminate knowledge, and foster innovation in adaptation.

“This was a very comprehensive study and shows a wide-ranging snapshot, through the six projects examined, of the breadth of the Adaptation Fund’s important locally-led adaptation approaches, which have enormous benefits for those who most need and are empowered by these tools – the most vulnerable,” said Adaptation Fund Board Chair Mr. Ibila Djibril.

“The study is an excellent example of the valuable knowledge we can delve into and share from the Adaptation Fund’s 13 years of pioneering work on the ground, and represents one of our three strategic pillars – Learning and Sharing, together with Action and Innovation,” said Adaptation Fund Manager Mr. Mikko Ollikainen. ”We are very pleased to share this experience with the global adaptation community, to inform the design of local activities and implementation of local decision-making in adaptation projects.”

AF’s Knowledge Management Officer Cristina Dengel said common successes in locally led adaptation approaches among the six projects examined in the study that stood out include: empowerment of vulnerable groups and local actors; building trust with vulnerable and marginalized populations through sensitive and respectful working methods; and increased and sustained participation in climate action of local governments past the end of project funding through early involvement in project design of local leaders.

“Since its inception the Adaptation Fund has pioneered the Direct Access modality, in which developing countries can access climate finance directly through their own country institutions and systems,” Dengel said. “Implementing locally-led action through the Direct Access modality has enabled national institutions to develop and expand their capacities and to later deploy their expertise widely at national and international levels.

“In the past decade, as the volume of adaptation finance has increased, and early investments have matured, the role of local leadership in pursuing effective adaptation action has come to the fore. Emerging perspectives suggest that vulnerable groups and local actors can deliver effective adaptation when they are empowered to put into action solutions that work best for them. Direct Access put into practice the philosophy of increasingly devolved and country-driven leadership, and empowered local institutions and local actors by ensuring local participation from the beginning of project design through implementation.” 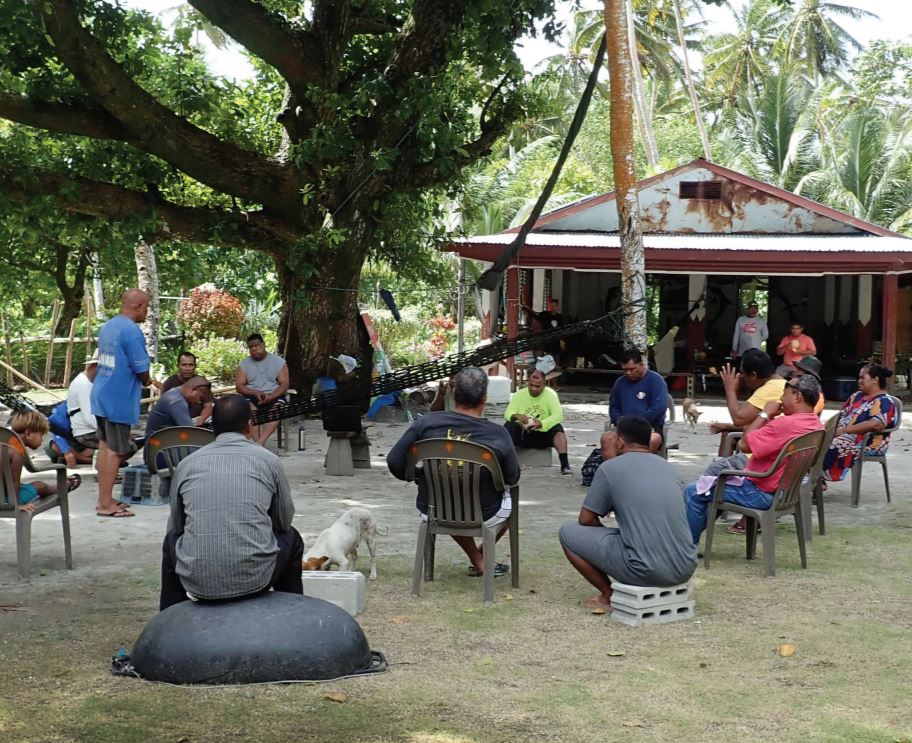 Consultation in Pakin community discussing stakeholder roles and the importance of Marine Protected Areas as a strategy to build community resilience to climate change. (Photo by MCT, Conservation Society of Pohnpei)

For example, the case example in the study of the AF-funded project in the small island developing state (SIDS) of the Federated States of Micronesia illustrates several positive impacts of locally-led action at various levels. The project provides practical solutions for reducing community climate vulnerability and is implemented by Micronesia Conservation Trust (MCT), which was accredited through the Fund’s streamlined accreditation process that opens doors for smaller entities such as those from SIDS. It further is an example of ‘Enhanced Direct Access,’ which the Fund also pioneered and empowers accredited national implementing entities such as MCT with autonomy to directly identify and fund local projects.

The Micronesia project has empowered several community-based organizations to exercise leadership by managing small grants, and municipal governments in Pohnpei and Kosrae through a small grants facility to protect marine areas and livelihoods. A local NGO and traditional leaders representing a small isolated community in the Pakin Atoll reachable only by boat through dangerous currents also demonstrated important leadership in overcoming burdens to access climate finance, while in the State of Yap women’s groups have shown leadership in planning ecosystem-based adaptation approaches to marine and land environments in various villages.

“Communities have the local and traditional knowledge of their natural resources and already know what solutions are needed to fix such problems in their backyards,” said MCT Executive Director, William Kostka. “Those of us who serve and support them need to provide them with the technical and financial support they need in order for them to implement these local solutions.”

The study also examined common challenges and lessons gathered among the six projects studied and found that knowledge is limited on what works in practice to best promote locally-led action, and that linguistic and physical geography issues can inhibit access and communication when involving local actors.

It included several recommendations, such as AF continuing to raise funds and evolving to keep pace with new demands for LLA; channeling finance to local-level entities through new ways such as AF’s Innovation Facility and small grants aggregator programme; encouraging LLA through strategy and policy measures; and leveraging AF’s comparative advantage in convening expertise and disseminating new knowledge in channeling climate finance for LLA.