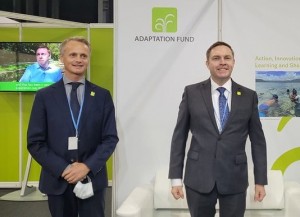 The Adaptation Fund had a successful run at the recently completed COP26 climate conference in Glasgow, raising a record US$ 356 million in new pledges – triple the amount it raised last year and nearly triple its US$120 million fundraising goal for 2020 – across a record 16 different contributors. This included first-time donors to the Fund, such as the U.S., Canada (national level) and Qatar, which was the first developing country to contribute to the Fund. The Fund also saw a record 100 million Euro pledge from the European Union, a 50 million Euro pledge from its largest historical contributor Germany, and new multi-year pledges from Norway and Ireland that followed a recent trend set by Sweden. In addition, Parties to the UN Framework Convention on Climate Change made several policy decisions on the governance side expressing support for the Fund. This included finalizing the rulebook of the Paris Agreement, by agreeing for example that 5 percent of proceeds from emission reduction credit sales will be provided to the Adaptation Fund once a new sustainable development mechanism becomes operational.

The Adaptation Fund’s leaders reflect on these record new pledges and talk about the overall support and momentum at the conference seen toward climate adaptation and the Fund’s work.

Listen to the podcast.