Nobby Saad Ibrahim, a 54-year old farmer from Al-Baghdadi village and a direct beneficiary of the project. (WFP photo)

Egypt is highly vulnerable to climate change impacts such as water scarcity, drought, and rising sea levels. Southern Egypt, a region that is already economically stressed and whose food supplies are under constant threat of disruption, faces extreme climate shocks with reduced crop and livestock productivity caused by temperature rise and higher level of drought as well as reduced water resources. The World Food Programme (WFP) estimates that this region could lose a minimum of 30 percent of its food production by 2050.

The agricultural sector is one of the most important sectors to the country’s economy providing livelihoods for over half the labor force, and is among the most climate-vulnerable.
Abdelglel, a smallholder farmer, decided to participate in community actions to seek ways to secure food after years of struggle with dramatic reduction in his wheat production.

As a first step, he and his neighboring farmers worked together to consolidate their small, fragmented land plots to reduce loss and inefficient use of land. After conducting soil analysis of productivity of each plot, the farmers collaborated as one farm to cultivate the same crops using climate-smart methods such as intercropping, heat-tolerant varieties, and more ideal sowing dates to reduce climate-induced productivity losses, fertilizer and water usage. With additional land being cultivated and economies of scale achieved, the farmers were able to increase productivity by 50 percent and income by 45 percent.
These measures are part of a ‘Building Resilient Food Security Systems to Benefit the Southern Egypt Region’ project that the Ministry of Agriculture and Land Reclamation started in 2013 as a response to climate impacts on agriculture and livelihoods. 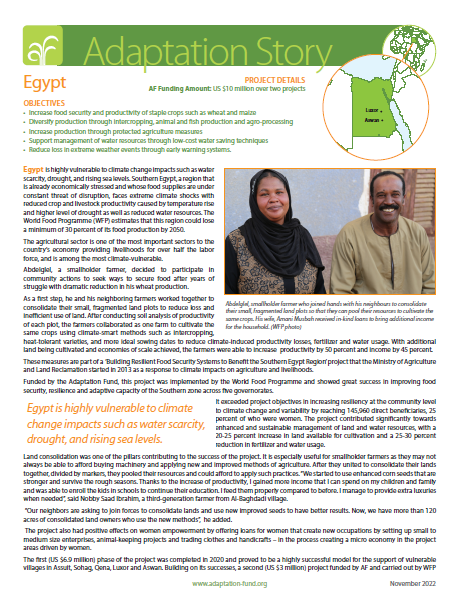 Funded by the Adaptation Fund, this project was implemented by the World Food Programme and showed great success in improving food security, resilience and adaptive capacity of the Southern zone across five governorates.

It exceeded project objectives in increasing resiliency at the community level to climate change and variability by reaching 145,960 direct beneficiaries, 25 percent of who were women. The project contributed significantly towards enhanced and sustainable management of land and water resources, with a 20-25 percent increase in land available for cultivation and a 25-30 percent reduction in fertilizer and water usage.