The Seychelles, a small island developing state (SIDS) in the Indian Ocean, consists of 115 islands, of which some 40 are granitic and the rest are coral formations, and most of the population mostly lives in about eight of these islands. The island faces several impacts of climate change, including sharp bursts of precipitation that creates heavy flooding in the wet season, and at the same time, imposes extended periods of drought during the dry season, leading to long spells of water scarcity.

The climate change projections in the Seychelles show that rainfall, while increasing in overall terms, will become even more irregular. Communities living along the coasts are also vulnerable to flooding as a consequence of rising sea levels. During cyclone season, this vulnerability is exacerbated by increased storm surges.

However, a project is building resilience to these effects through ecosystem-based approaches
that are securing water supplies and providing protections against flooding. “I have seen a transformation of the wetlands at Anse Royale, from all the years I have worked here. The wetlands had become a dumping site that led to environmental impacts such as floods. The wetlands have now been cleaned, and we can bring students on educational visits by the wetland. The younger generation can now see moorhens — they are observing a livelier wetland with species that were not there before,” said
Peggy Agathine, a Mont Plaisir Watershed Committee member and an active volunteer. 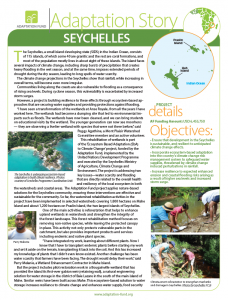 This rehabilitation of wetlands is part of the ‘Ecosystem Based Adaptation (EbA) to Climate Change’ project, funded by the Adaptation Fund, implemented by the United Nations Development Programme and executed by the Seychelles Ministry of Agriculture, Climate Change and Environment. The project is addressing two key issues—water scarcity and flooding that are directly related to the overall health and resiliency of the local ecosystem in both the watersheds and coastal areas. The Adaptation Fund project applies nature-based solutions for the Seychelles community, ensuring these interventions are effective and sustainable for the community. So far, the watershed rehabilitation activities in the project have been implemented in selected watersheds covering 1,800 hectares on Mahe Island and about 1,200 hectares on Praslin Island, the two largest islands of Seychelles.