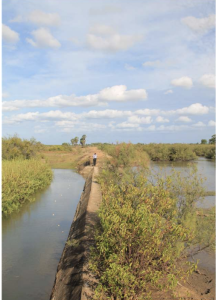 Mullaitivu District is one of the newly created Districts in Sri Lanka. Mullaitivu District belongs to the Dry Zone which has four agro-ecological regions. Mullaitivu District regularly experiences droughts, floods, strong winds and lightning and being a coastal area is open to the threat of coastal hazards. The salinity of water is increased during the drought period with inundations, saltwater intrusion, resulting in lack of drinking water and water for agriculture, pollution of waterways, wells, decreasing agricultural crop yields, seasonal increases in waterborne diseases and increased soil erosion from heavy rainfall events. These have caused significant loss to property, agricultural land, irrigation channels and built infrastructure etc. on a number of occasions over several years.

In addition, Mullaitivu is one of the Districts with socioeconomic resilience to disasters is less than or equal to 30%, indicating that the average resident of Mullaitivu District struggles to cope with and recover from shocks when they occur. This struggle results in a lower likelihood of recovery in the long-term, and is due to a complex of factors, such as, poverty incidence, diversity of income sources, financial inclusion, and social protection enrollment, the net effects of which, wellbeing losses are designed to measure.

The proposed project introduces effective drought, saltwater intrusion, and other preparedness measures to reduce risk levels in Mullaitivu District and increase adaptive capacities and resilience of the most vulnerable sections of the communities. The overall objective of the proposed project is to support climate resilient development and increase capacity for climate change adaptation of target communities living in the Mullaitivu District. This will be done by improving climate related socio-economic outcomes in the targeted fishing and agricultural communities through the implementation of community-based adaptation solutions; and by supporting climate resilient development and increase institutional and community capacity to adapt to the changing and variable climate.

The project will provide both increased cash income of communities through improvement of livelihood and improved resilience through small-scale infrastructure and will contribute to the generation of evidence-based practices. The project aims to benefit more than 12,000 individuals directly and 16,000 indirectly.