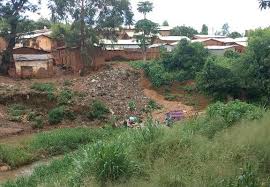 Encroachment of settlements near the Likangala River

Africa is undergoing rapid urbanization that will result in almost 1.33 billion people living in cities by 2050, compared to 470 million at present. A large part of the housing demand is being met by growing informal settlements characterized by poor living conditions, lack of access to basic services and infrastructure, and often located in areas exposed to natural hazards.

Southern Africa is highly exposed to recurrent natural hazards such as cyclones, floods, sea level rise/coastal erosion and drought. Urban areas are generally more vulnerable to risks than rural areas, due to denser populations, concentration of assets and variety of activities within comparatively smaller geographical areas. Urban risks are exacerbated by the increasing severity and unpredictability of disruptive events caused by climate change effects.

At the same time, inadequate institutional capacities and weak governance processes are significantly exacerbated by the rapid expansion of both formal and informal urban settlements. Developing local governance capacity in risk management and resilience planning is a key strategy to reduce the multiple risks cities are exposed to and adapt to the adverse effects of climate change.

The project will strengthen urban climate resilience by working with various levels of government and stakeholders and ensuring strong participation, in particular, of the most marginalized and vulnerable groups, in all its phases – from conception to evaluation. The main activities will take place in Madagascar, Malawi, Mozambique and the Union of Comoros – all located in the south-eastern part of the African continent, which is a region highly vulnerable to common transboundary extreme climate-related events. Four cities with different types of vulnerabilities have been selected in these countries to implement pilot climate adaptation projects following a participatory approach, namely: Morondava, Madagascar; Zomba, Malawi; Chokwe, Mozambique; and Moroni, Comoros.

The project has two objectives.