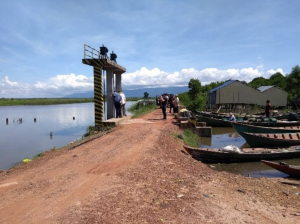 Cambodia is vulnerable to droughts, floods and sea-level rise. The coastal area is also increasingly affected by strong winds, which are often associated with the onset of thunderstorms. Increases in sea levels are especially alarming for Cambodia’s coastal areas that are already experiencing severe seawater intrusion, beach erosion, high tides, and frequent storm surges. Additional impacts such as land subsidence in the region may even further intensify its effects. In addition, substantial saltwater incursion and coastal erosion has been observed throughout the coastal area, including in all eight of the target communes. Considering the topography of the area; primarily flat coastal plain, characterised by rice paddy and poor settlements, erosion and seawater incursion is having a substantial impact on the ability of people to source their livelihoods.

The main objective of the project is to enhance climate change adaptation and resilience of the most vulnerable coastal human settlements of Cambodia through concrete climate change adaptation actions, particularly in areas where ecotourism has the potential to sustain such interventions. To achieve this objective, the project focuses its actions on highly vulnerable settlements in Kep Province and Prey Nob District of Preah Sihanouk Province.