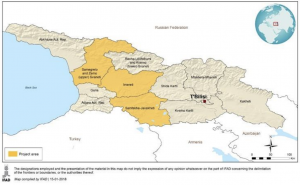 The Programme will cover 36 percent of all rural settlements and more than half of a country’s total rural population. While the three contiguous regions of Imereti, Samegrelo-Zemo Svaneti and Samtskhe-Javakhetise regions, where the programme will start to be implemented, are not the poorest in country, poverty levels are still high, especially in remote and mountainous communities where climate vulnerability is an issue. The identified regions have relatively large climate vulnerable mountainous areas where the households are identified as being dependent on degraded pastures. The 3 regions covered by the project are already, and will be even more severely subject to, climate change risks in the form of frequent seasonal and yearly droughts, heat waves, rainfall storms and associated land degradation. As pressures from overgrazing are considerable factors in pasture degradation, the project areas will comprise 50% of the national cattle population and where almost 99 percent of cattle owners are smallholders with less than 20 heads of cattle.

The project will target:

i) smallholder livestock farmers with 1-20 herd of cattle, and will be the focus of most training and technical assistance activities for smallholder farmers +PUAs; and

ii) smallholder farmers that will not comply to EU regulation on dairy products and are willing to diversify their activities.

The anticipated total number of the DiMMA direct beneficiaries will be at least 6,000 smallholder farmers (approximately 16,500 people in 5,000 households). The overall goal of the project is to reduce the vulnerability of the dairy value chain to the deleterious impacts of climate change by enhancing the resilience of vulnerable dairy producers.