Wake Up to the Looming Water Crisis, Report Warns

Wake Up to the Looming Water Crisis, Report Warns

Wake up to the looming water crisis, report warns

Geneva 5 October 2021 – Water-related hazards like floods and droughts are increasing because of climate change. The number of people suffering water stress is expected to soar, exacerbated by population increase and dwindling availability. But management, monitoring, forecasting and early warnings are fragmented and inadequate, whilst global climate finance efforts are insufficient according to a new multi-agency report.

The State of Climate Services 2021: Water highlights the need for urgent action to improve cooperative water management, embrace integrated water and climate policies and scale up investment in this precious commodity which underpins all the international goals on sustainable development, climate change adaptation and disaster risk reduction. 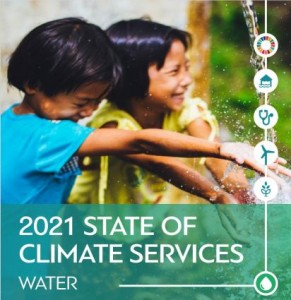 “This past year has seen a continuation of extreme, water-related events. Across Asia, extreme rainfall caused massive flooding in Japan, China, Indonesia, Nepal, Pakistan and India. Millions of people were displaced, and hundreds were killed. But it is not just in the developing world that flooding has led to major disruption. Catastrophic flooding in Europe led to hundreds of deaths and widespread damage,” he said.

“Lack of water continues to be a major cause of concern for many nations, especially in Africa. More than two billion people live in water-stressed countries and suffer lack of access to safe drinking water and sanitation,” he said.

“We need to wake up to the looming water crisis,” said Prof. Taalas.

The report was coordinated by WMO and contains input from more than 20 international organizations, development agencies and scientific institutions, including the Adaptation Fund, which is a key partner.

“The State of Climate Water Services 2021 report confirms what we are already seeing across the globe in increased flooding and drought risks. It further demonstrates the need to increase ambition for adaptation finance to build water security and resilience against disasters. With half its portfolio dedicated to water management, disaster risk reduction, early warning systems and food security, and many water access projects with parallel benefits in sanitation, the Adaptation Fund has several funding windows in place to deliver tangible, effective and innovative projects on the ground to those who need it the most,” said Mr. Mikko Ollikainen, Head of the Adaptation Fund, who also spoke at the Oct. 5 launch of the report.

“From delivering early warning systems and reforestation to build resilience among 200,000 people who were vulnerable to flash floods and landslides in Georgia, to restoring traditional indigenous water canals for consumption and agriculture in dry regions of Morocco, bringing access to water directly to rural villages in Lao PDR, and innovating rooftop water catchment systems and diversified greenhouses against drought in Chile, the Fund is delivering concrete and scalable solutions to the most vulnerable.”

According to figures cited in the report, 3.6 billion people had inadequate access to water at least one month per year in 2018. By 2050, this is expected to rise to more than five billion.

In the past 20 years, terrestrial water storage – the summation of all water on the land surface and in the subsurface, including soil moisture, snow and ice – has dropped at a rate of 1cm per year. The biggest losses are occurring in Antarctica and Greenland, but many highly populated lower latitude locations are experiencing significant water losses in areas that are traditionally providing water supply, with major ramifications for water security.

The situation is worsening by the fact that only 0.5% of water on Earth is useable and available freshwater. 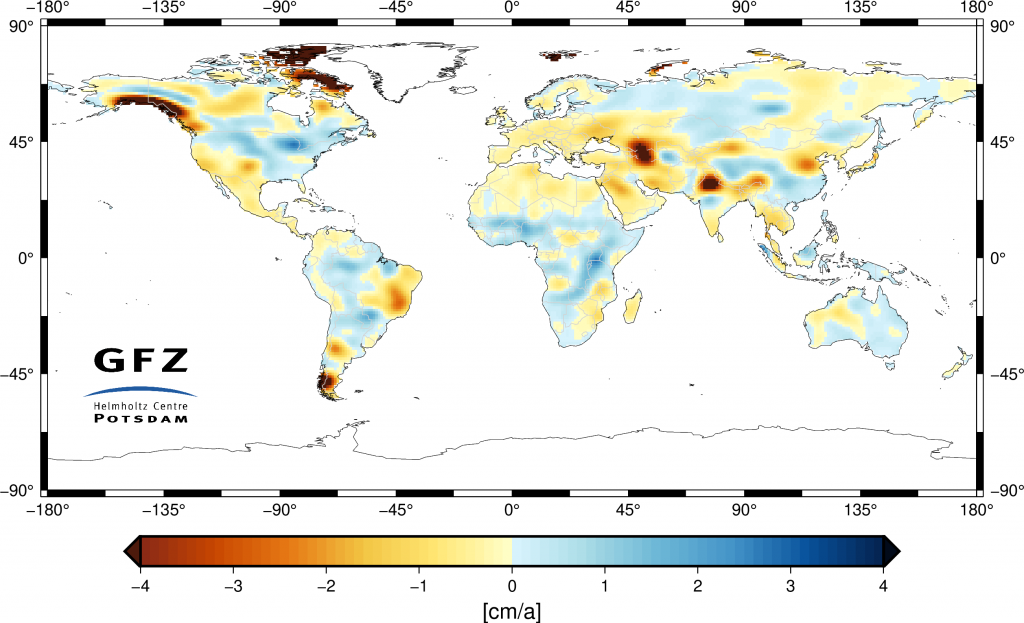 Terrestrial Water Storage (TWS) trends of the past 20 years (2002-2021). The red areas indicate a large water mass loss during the time. These areas are those worst affected by climate change and/or human activity, excluding Greenland and Antarctica, which are not included on the map, as their water mass loss trends are so great that they overshadow the other continental water mass trends.

Water-related hazards have increased in frequency over the past 20 years. Since 2000, flood-related disasters have risen by 134% compared with the two previous decades. Most of the flood-related deaths and economic losses were recorded in Asia, where end-to-end warning systems for riverine floods require strengthening.

The number and duration of droughts also increased by 29% over this same period. Most drought-related deaths occurred in Africa, indicating a need for stronger end-to-end warning systems for drought in that region.

Integrated Water Resources Management (IWRM) is vital to achieving long-term social, economic and environmental well-being. But, despite some advances, 107 countries remain off track to hit the goal of sustainably managing their water resources by 2030.

Overall, the world is seriously behind schedule on the UN Sustainable Development Goal No. 6 (SDG 6) to ensure availability and sustainable management of water and sanitation for all. In 2020, 3.6 billion people lacked safely managed sanitation services, 2.3 billion lacked basic hygiene services and more than 2 billion live in water-stressed countries with lack of access to safe drinking water.

75 countries reported water efficiency levels below average, including 10 with extremely low levels. The current rates of progress need to quadruple in order to reach the global targets by 2030.

The good news is that nations are determined to improve the situation. According to the United Nations Framework Convention on Climate Change (UNFCCC), water and food are the two top priority issues of the Nationally Determined Contributions (NDCs) to the Paris Agreement, with countries highlighting the need for strengthening climate services for water. 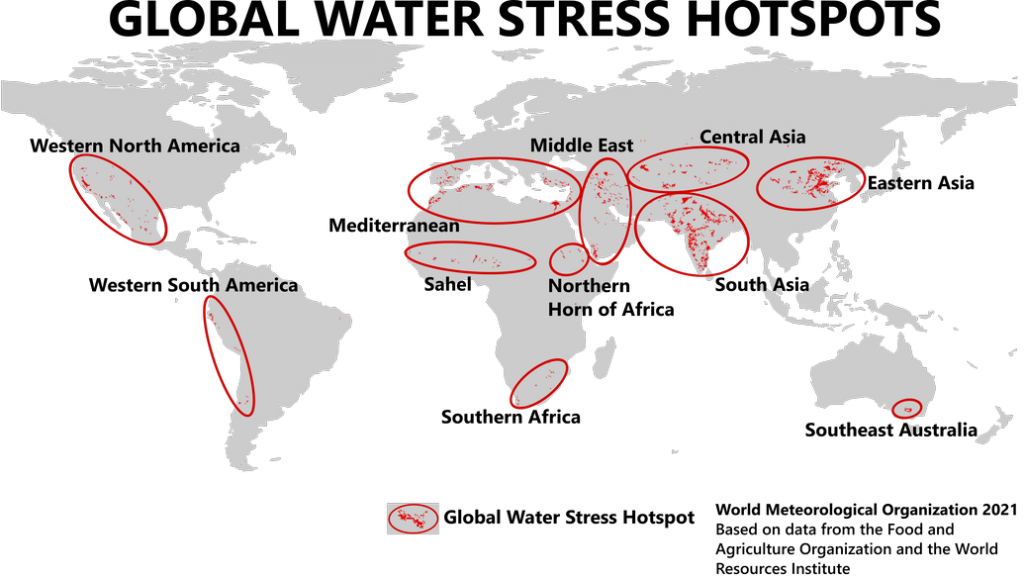 To reduce water-related disasters and support water resource management, climate services for water and end-to-end early warning systems, as well as sustainable investments, are required. These are not yet adequate.

Some 60% of national meteorological and hydrological services – the national public agencies mandated to provide basic hydrological information and warning services to the government, the public, and the private sector – lack the full capacities needed to provide climate services for water.

A WMO assessment of 101 countries for which data are available found that:

Additional funding and investment is essential to support adaptation. Despite a 9% increase in financial pledges made to tackle SDG 6, official development assistance (ODA) commitments remained stable at US$ 8.8 billion between 2015 and 2019. 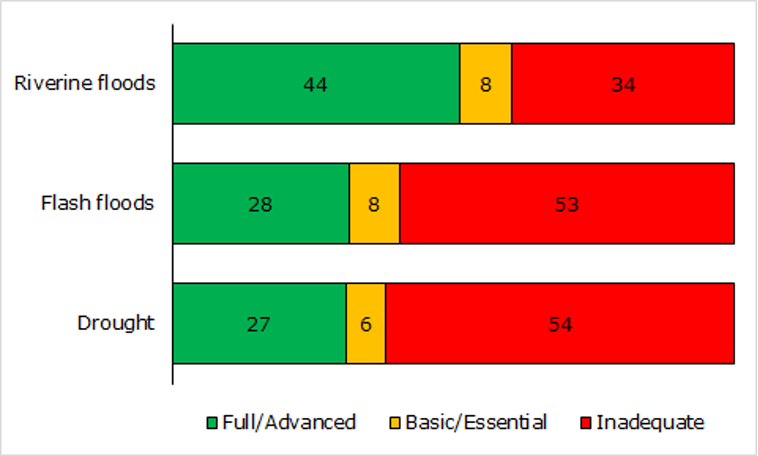 Number of WMO Member countries with early warnings available to the population at risk, by hazard type, based on data from WMO Members providing data. Member capacities are categorized as Inadequate (0-33%), Basic/Essential (34-66%), and Full/Advanced categories (67-100%) according to the estimated percentage of the population at risk that receive EW. Note: For each hazard, the category ‘Inadequate’ includes Members (providing data) reporting that no end-to-end EWS for the hazard is in place, as well as those whose end-to-end EWSs do not reach more than 33% of the at-risk population

The report makes strategic recommendations for policy makers to improve the implementation and effectiveness of climate services for water worldwide:

Distributions of flood-related disasters and related losses by region, 1970-2019 (WMO/CRED).

Distributions of drought-related disasters and related losses by region, 1970-2019 (WMO/CRED)

WMO thanks all partners for contributions and input:

Food and Agriculture Organization of the UN (FAO)

UNEP-DHI Centre on Water and Environment