Washington, D.C. (March 5, 2021) — The Adaptation Fund expanded access to climate finance among especially vulnerable countries to climate change and its growing community of national implementing entities (NIEs), with the Board’s accreditation of the Mennonite Social Action Commission (CASM) in Honduras in late February.

The Adaptation Fund Board approved the accreditation through a virtual intersessional decision. Honduras marks the 33rd country whose NIE has gained accreditation through the Fund’s pioneering Direct Access modality, which builds country ownership in adaptation by empowering countries to directly access funding and identify, develop and implement their own projects. The Fund additionally has 21 multilateral and regional implementing entities, for a total of 54 implementing entities that are carrying out 115 concrete projects on the ground in more than 100 developing countries.

CASM, known as Comisión Acción Social Menonita in Spanish, is an apolitical ecumenical non-profit civic organization established by the Evangelical Mennonite Church of Honduras. It helps to strengthen democratization, local and regional development, citizen participation of civil society, and establish respectful dialogue with local governments, with a focus on human development in the poorest families and communities of Honduras. It further seeks to promote comprehensive development programs for the country’s vulnerable rural communities that have had their living conditions affected by climate change.

At the global level, CASM is a member of the ACT Alliance, a coalition of 150 churches and organizations working together in over 125 countries to create positive and sustainable change in the lives of poor and marginalized people — regardless of religion, politics, gender, sexual orientation, race or nationality — in keeping with the highest international codes and standards.

The accreditation of CASM represents a broadening of organizations that have joined the Adaptation Fund’s community of partners working on adaptation. Of the 33 NIEs accredited to date, many include development agencies and banks, foundations and government environmental ministries, but also some humanitarian-oriented NGOs and civic organizations. Each NIE is nominated and endorsed by its respective government through a national Designated Authority prior to applying for accreditation.

The accreditation of CASM in Honduras was further made under the Fund’s groundbreaking streamlined accreditation process for smaller entities that may not otherwise have access to climate finance, including those from small island developing states and other small countries. The process upholds the Fund’s strong accreditation and fiduciary standards while making it simplified and individualized to entities’ capabilities. CASM is the 5th NIE to undergo this streamlined process, joining NIEs in Tuvalu, Cook Islands, the Federated States of Micronesia and Armenia.

Direct Access also serves to build NIE and country capacity to effectively respond to the challenges of climate change going forward, and develop country-led projects in the most vulnerable communities.

“Honduras has been classified by Germanwatch in recent years as among the three countries that are most vulnerable to climate change worldwide. Especially in the interior of the country and the most vulnerable areas, this is a great contribution for Honduras by having the opportunity to access financial resources that support initiatives aimed at reducing socio-environmental vulnerabilities that enable counteractions to climate change,” said Nelson Garcia Lobo, Executive Director of CASM in Honduras. “The Mennonite Social Action Commission is an organization with more than 38 years of work in Honduras. One of the most important lines of action is the reduction of vulnerabilities due to the effects of climate change, work for which CASM has received several national and international recognitions and awards. This accreditation will also allow us to continue developing joint work with other organizations and institutions that are addressing this problem.”

“With the new accreditation of CASM in Honduras, the Adaptation Fund is very pleased to expand the number of climate-vulnerable countries and civic organizations in the world with the capability to directly develop and implement adaptation projects under Direct Access, and build country ownership, leadership and resilience to climate change for those who need it most,” said Mr. Ibila Djibril, Chair of the Adaptation Fund Board.

Honduras’ economy is primarily based on small scale agriculture, making it especially vulnerable to climate-related rising temperatures, erratic rainfall and natural disasters — including the particularly damaging Hurricane Mitch in 1998 and Hurricanes Eta and Iota in 2020.  Germanwatch’s 2018 Global Climate Risk Index reported that between 1997 and 2016, Honduras was the country ‘most affected by extreme weather events’ in the world. Honduras also has a wide inequality index, with poor communities being largely agriculturally based and wealth concentrated in urban centers. 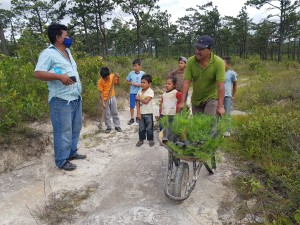 To date, the Adaptation Fund has funded two projects in Honduras carried out by UNDP and the Honduran government that have showed tangible results in managing water resources, sustainable agriculture, and ecosystem-based adaptation that includes reforestation components.

While Honduras has accessed funding up to the current US$ 10 million single-country cap through these projects, the Board is in the process of considering lifting the cap. In the meantime, the Fund also offers NIEs opportunities to access new scale-up, innovation and learning grants that were launched in the past year.

Another positive aspect in gaining Direct Access accreditation is that it often leads to concrete projects that can later be scaled up with additional resources, as well as other climate finance opportunities and a stronger position for the country to address its adaptation needs into the future.

“Honduras has built a solid track record with the Adaptation Fund in developing effective projects, and the accreditation of CASM will serve to build on that, by empowering country ownership and potentially opening the door to additional climate financing possibilities for the country to help further address its climate vulnerabilities and improve the lives of more vulnerable communities,” said Mr. Mikko Ollikainen, Manager of the Adaptation Fund.

CASM’s portfolio includes 28 projects valued at about US$ 10 million. The Fund’s independent Accreditation Panel noted that CASM is managing a budget well over US$ 1 million in one awarded project in which it is part of a consortium. It has also built up a solid donor base including the Honduran Government, bilateral and multilateral development donors, and NGOs.