Bonn, Germany (April 14, 2022) — The 38th Meeting of the Adaptation Fund Board concluded here last week with the Board approving US$ 34.37 million in new adaptation projects, as well as several key decisions that included furthering development of the Fund’s next five-year strategy and developing guidance on optional co-financing of projects, among others.

It additionally approved a new evaluation policy which seeks to enable the Fund’s evaluation function to contribute effectively towards the achievement of the mission, goal and vision of the Fund, including the Paris Agreement, especially its Global Goal on Adaptation (GGA). It will be primarily operated by the Fund’s independent Technical Evaluation Reference Group (TERG), and help further the work of the Fund by adding value to its ongoing projects and programmes.

Recognizing the significant growth of the Fund’s portfolio and to support the secretariat capacity, the Board approved an increase of secretariat staffing with dedicated support to innovation and project review streams.

The hybrid meeting, which included a mix of in-person and remote participation to limit risks of Covid-19, also featured the elections of Mr. Albara Tawfiq, of Saudia Arabia and representative of the Asia-Pacific constituency, as the Board’s new Chair, and Mr. Antonio Navarra of Italy and the Western Europe and Others Group as the Vice-Chair. 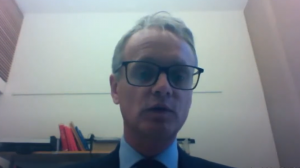 Tawfiq assumes the Chairship from Mr. Mattias Broman, of Sweden, who completed his successful one-year term which included a record US$ 350 million in new funds raised and the Board making several milestone decisions such as doubling the country cap on single-country project funding from US$ 10 to 20 million, as well as doubling the number of national implementing entities countries can have under the Fund’s pioneering Direct Access modality which builds country ownership in adaptation.

Broman thanked Tawfiq for his work as Vice-Chair in the past year and the support of his other Board colleagues, as well as the Secretariat, TERG and AF CSO Network in furthering the Fund’s work smoothly over the past year, despite the challenges of the pandemic. “I was very happy that we could take several key decisions including to raise the cap, which was a much-awaited decision, and the successful dialogue we had at COP26 in Glasgow and very successful resource mobilization we managed to do there,” Broman said.

Tawfiq expressed his appreciation to Broman for the great results the Fund achieved under his leadership and guidance, and his appreciation to the Secretariat and colleagues for having kept the Fund moving in the right direction through Covid-19. “Following the successes of COP26 and the milestones the Adaptation Fund achieved in recent years, we have a great responsibility ahead of us and I look forward to working with you all and your continued support,” said Tawfiq, before presiding over the two-day meeting.

Following the meeting, Tawfiq added, “I am pleased with the meeting results. The Adaptation Fund Board took a number of key decisions to advance the Fund’s work, including furthering development of the second Medium-Term Strategy which will build on the Fund’s excellent work over the last five years in the pillars of Action, Innovation and Learning and Sharing, and take it some steps further to continue to innovate and adapt to the rising adaptation needs of the countries we serve. We also were able to approve a number of new projects on the ground, including the Fund’s first regional project covering Chad and Sudan and its first single-country projects in Trinidad and Tobago, and Kyrgzstan.”

The Board’s greenlight to pursue development of the Fund’s next five-year Medium-Term Strategy (MTS) under option 2 of several possible directions that were provided by the Secretariat will build on the strategic framework and achievements of the first MTS while adding further enhancements by proposing strategic updates and adjustments aimed at consolidating the Fund’s success and comparative advantage and optimizing its impact. The Fund will also undertake additional stakeholder consultations in further developing a draft MTS for the next Board meeting.

In approving development of a consultative process to provide guidance on optional co-financing of projects to further maximize impacts of projects, the Fund will work on defining scope, parameters, potential finance instruments, and ways to address potential risks for co-financing. This will build on the Fund’s niche of often piloting the first adaptation projects in many places that in addition to producing many direct adaptation benefits to the vulnerable populations they serve, frequently produce successful models that have been later replicated or scaled up by other partners.

“We have seen Adaptation Fund projects scaled up in nearly 20 instances to date, and governments or other organizations sometimes add funding to projects, which can lead to transformative impacts for climate-vulnerable communities,” said Mr. Mikko Ollikainen, Head of the Adaptation Fund. “This is something we will continue to build on, and the Board’s decision opens the doors to more potential interest from the public and private sector in adding value to or extending the reach of Fund projects in the future in a more systematic way. I was also pleased to see the Board approve not only several concrete adaptation projects, but also advance key strategic elements such as Enhanced Direct Access and new innovation grants which is a growing area of the Fund that is aimed at taking innovation in adaptation a step further to try to help create additional proven models to help address the urgency of climate change.”

The Board also approved the FY ‘23 work plans and budgets of the Secretariat and TERG, as well as surveys to gather additional input on a draft resource mobilization strategy and action plan, among other decisions.

Since 2010, the Adaptation Fund has committed nearly US$ 878 million for climate change adaptation and resilience projects and programmes, including 129 concrete, localized projects in the most vulnerable communities of developing countries around the world with 33 million total beneficiaries. It also pioneered Direct Access and Enhanced Direct Access, empowering countries to access funding and develop local projects directly through accredited national implementing entities.