AF funded project in Dominican Republic implemented by the Dominican Institute of Integral Development (IDDI) is increasing resilience capacity to flooding and drought impacts to the various river and water basins in the area by directly empowering local beneficiaries through their own participation in targeted adaptation measures. (Photo by IDDI)

Gathering broad consultation and input from stakeholders is aligned with AF’s inclusive and transparent approaches to its work, and will enable the Fund to build on the successes of its first MTS (2018-2022) as it shapes its strategic vision for the next five years.

Stakeholders are invited to submit their input through an online survey by January 31, 2022.

The AF Board decided at its meeting last October to begin developing the next MTS, and asked the Fund’s secretariat to undertake preparatory work for it and take into account findings and recommendations from a mid-term review of the first MTS by the Fund’s independent Technical Evaluation Reference Group.

The Board requested the secretariat to solicit inputs through open and inclusive consultations of the Fund’s various stakeholders, including the Board, contributor and recipient governments, accredited implementing entities, civil society representatives including the AF CSO Network, and other relevant stakeholders. The Fund encourages inputs from additional important stakeholders such as academia, climate and technical experts, youth, indigenous peoples, the private sector, and others.

The mid-term review concluded in part that the first MTS has been a “good fit-for-purpose strategy, ambitious, forward-looking and responsive” to global processes and imperatives for adaptation, reflecting “good practices” and being fully responsive to the Paris Agreement while also enhancing quality and project compliance. It also reported that progress during the first half of the MTS was “significant,” with AF launching seven new funding windows that received significant responses and enabled it to go beyond past achievements. 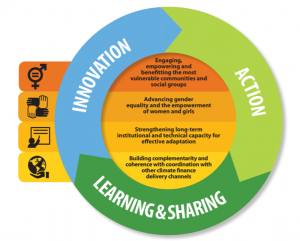 The first MTS was launched in 2018 with a focus on the strategic pillars of Action, Innovation, and Learning and Sharing. It included cross-cutting themes such as engaging and empowering the most vulnerable groups, advancing gender equality and empowerment of women and girls, building long-term capacity for adaptation, and advancing complementarity with other climate funds.

“The Adaptation Fund’s first Medium-Term Strategy has been a groundbreaking success in building on the Fund’s strengths to continue to pioneer concrete, effective and scalable adaptation projects on the ground, as well as expanding to offer several additional funding windows through its pillars of Action, Innovation, and Learning and Sharing to continue to innovate and swiftly evolve to meet the urgency of climate change,” said Mikko Ollikainen, Head of the Adaptation Fund. “The next MTS will be just as pivotal as we continue to adapt to countries’ needs and rising global climate challenges, and build on the Fund’s strategic vision over the next several years. Gathering input from all of AF’s stakeholders is an essential and important component of this work and aligned with the heart of the Fund’s country-led adaptation projects and programmes.”

AF has undergone significant growth during the period of the first MTS, rising to more than 125 concrete single-country and regional projects serving over 31 million total beneficiaries. Additional funding windows that were launched included grants for project scale-up, accelerating innovation and learning in adaptation, as well as building on the Fund’s pioneering Direct Access modality through Enhanced Direct Access to continue to strengthen country ownership in adaptation. AF recently released its Annual Performance Report  for 2021, which reflects this continued growth across its pillars.

The survey responses and results will feed into a report to be prepared by the secretariat, which will contain elements and options for MTS 2 for the years 2023–2027. It will be considered by the Board at its 38th meeting this March, with a view to developing a final draft strategy for consideration by the Board at its October meeting.

The full link to the survey is https://www.surveymonkey.com/r/AF_MediumTermStrategyII. Additional comments and questions can also be submitted via email to the Fund’s secretariat at afbsec@adaptation-fund.org.

Since 2010, the Adaptation Fund has committed nearly US$ 878 million for climate change adaptation and resilience projects and programmes, including 127 concrete, localized projects in the most vulnerable communities of developing countries around the world with 31.5 million total beneficiaries. It also pioneered Direct Access and Enhanced Direct Access, empowering countries to access funding and develop local projects directly through accredited national implementing entities.