Washington, D.C. (July 25, 2019) — The Adaptation Fund Board has approved 10 new concrete adaptation and resilience projects totaling US$ 93 million for the most vulnerable communities in developing countries throughout the globe, in intersessional decisions this month.

The decisions were made over two separate remote intersessional moves on July 8 and July 15. With the new approvals, the Adaptation Fund is rapidly closing in on 100 concrete projects on the ground. It now has 94 projects totaling about US$ 657 million.

Three of the regional projects had previously received technical approval from the Board in March, but were put on hold until the new fiscal year began on July 1st and new money became available through the Fund’s Funding Window for Regional Projects and Programmes – which has received consistent high demand from countries for its innovativeness and efficiency in tackling climate change issues that cross borders. A dozen regional projects have been approved since the programme launched in 2015, with a large pipeline of additional regional proposals in the works.

In addition to approving new projects, the Board also held a brief Additional Meeting at the end of June in Bonn, Germany to further procedural arrangements of the Fund in order to ensure it continues to serve the Paris Agreement smoothly. This administrative work served as continuing follow-up to the landmark decision of the Conference of the Parties serving as the meeting of the Parties to the Paris Agreement last December in Poland, which recognized the Fund’s important role in international climate finance in deciding that it shall formally serve the Paris Agreement as of January 1st, 2019. The decision helped stabilize the Fund as it transitions from the Kyoto Protocol to the Paris Agreement, and recognized its valuable niche in funding concrete adaptation projects for the most vulnerable and its pioneering Direct Access modality that builds country ownership in adaptation. 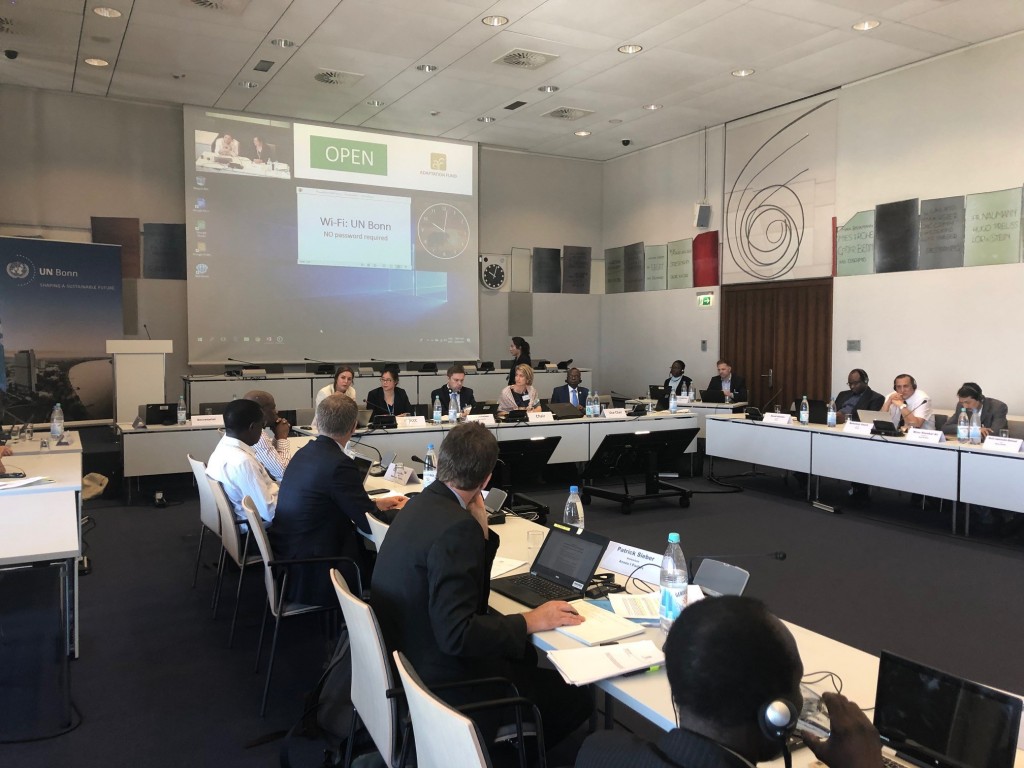 The additional meeting included a dialogue with civil society, which featured presentations from members of the Adaptation Fund NGO Network — including Green Alternative Georgia and Development Alternatives India. Ms. Gitika Goswami, of Development Alternatives India, spoke of the important facilitating role CSOs can play on the ground in the Fund’s projects, and the importance of gender impacts served by the projects. She said participatory planning involving women is key. She said the Fund’s project in West Bengal has also made strides in addressing droughts through water harvesting structures that use both traditional and scientific knowledge.

“The Adaptation Fund Board has continued to have an active and productive summer, and we are really pleased to approve 10 new concrete adaptation projects that will serve the most vulnerable communities to climate change on the ground,” said Adaptation Fund Board Chair Ms. Sylviane Bilgischer. “It was also great to see the Board advance its procedural arrangements to serve the Paris Agreement smoothly, so that we are in great shape as we head toward COP 25 later this year in Chile.”

“With vulnerable countries and communities encountering increased and stronger impacts of climate change, we are seeing rapidly growing demand for funding. Funding these 10 projects is in the core of the Adaptation Fund’s mission, and we are now steadily approaching 100 approved projects,” said Mr. Mikko Ollikainen, Manager of the Adaptation Fund Board. “Not only do the projects provide immediate benefits to the communities they serve, but they also serve as a wealth of information for others in the adaptation community. Learning and sharing those valuable practices is also a pillar of the Fund’s 11-plus years of experience on the ground.”

New projects approved by the Board intersessionally include: