Washington, D.C. (March 21, 2019) — In a busy 33rd meeting in Bonn, Germany last week, the Adaptation Fund Board approved new project proposals totaling about US$ 32.5 million, and advanced the transition process forward to help the Fund serve the Paris Agreement in a smooth manner.

The Board also accredited the Ministry of Water and Environment of Uganda as the Fund’s 29th national implementing entity (NIE) under its pioneering Direct Access modality, which empowers country ownership in climate change adaptation.

The Board approved new Direct Access projects in Armenia and the Dominican Republic, as well as a project in Bangladesh and the Fund’s first regional project in Eastern Europe — in Albania, Montenegro and North Macedonia.  The Board additionally endorsed 11 project concepts and pre-concepts, and approved US$ 170,000 in project formulation grants to help further develop them.

The other three regional projects that were recommended for approval by the Board will be considered for funding in July by remote intersessional decision. They total about US$ 39.5 million across projects in Benin, Burkina Faso and Niger; another in Comoros, Madagascar, Malawi and Mozambique; and one in Argentina and Uruguay.

The start of the Board meeting featured its annual change in leadership as Ms. Sylviane Bilgischer of Belgium became the new Chair and Mr. Ibila Djibril of Benin the Vice-Chair. Bilgischer congratulated outgoing Chair Mr. Victor Viñas of the Dominican Republic for the leadership he showed over the past year. She praised the Fund’s excellent results at COP 24 in December, which included decisions where the Fund is now formally serving the Paris Agreement and a record amount of new pledges raised. Several new Board members and alternates joined the meeting, as well, from the Bahamas, Fiji, Germany, Italy, Malawi, Spain and Sweden.

“This was a very full agenda and the Board accomplished a lot as a new group,” said Bilgischer. “The Adaptation Fund now has tangible projects for the first time in climate vulnerable countries of the Dominican Republic and Bangladesh, and its first regional project in Eastern Europe. We also enhanced climate access in Uganda by accrediting a new Direct Access entity there. Importantly, we made progress with the transition process from Kyoto to Paris and made steps forward so that the Fund will continue to serve both in the meantime and eventually just the Paris Agreement in a smooth and seamless manner.” 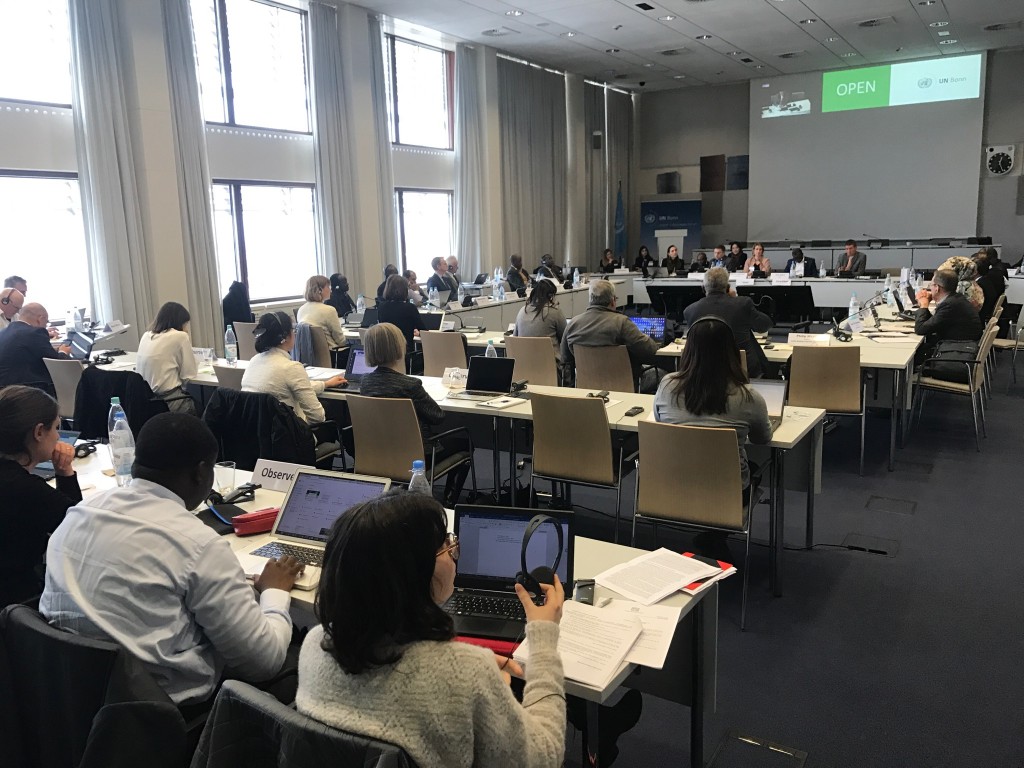 Among other key decisions by the Board, it decided to explore in consultation with civil society and draw on lessons from other climate funds, various options to further enhance civil society participation and engagement in the work of the Board and prepare an analysis for the next Board meeting. It also decided to consider extending the reaccreditation process for national implementation entities that are actively engaged in concrete projects to allow more time to comply with the process while those projects are being completed.

In advancing that matter, the Board decided to request the Fund to prepare for inclusion in the Board’s report to CMP 15 at COP 25 in Chile in December 2019 possible Board recommendations on those tasks and submit a draft for consideration at the October 7-11 Board meeting in Bonn later this year. It also asked the Secretariat to consult in the process with the Global Environment Facility (which currently hosts the Fund), World Bank (which serves as the Fund’s trustee) and UNFCCC Secretariat. It further established a task force composed of eight Board members to provide further guidance to the Fund in defining the scope of the elements to be included, and scheduled an abbreviated Board meeting for June 28-29 at the end of the upcoming UNFCCC Subsidiary Bodies meeting in Bonn to help propel the work forward in an efficient manner.

“Despite a very full agenda, it was great to see the progress made with the new projects funded to benefit vulnerable communities across a variety of adaptation sectors such as forestry (Armenia), water management (Dominican Republic), coastal zone management (Bangladesh), and disaster risk reduction (first regional project in Eastern Europe),” said Adaptation Fund Manager Mikko Ollikainen. “The Board decisions will also support the Adaptation Fund in moving forward smoothly as it serves the Paris Agreement through its tangible adaptation projects on the ground and building country capacities through Direct Access.”

Bilgischer said the Fund has a clear mandate as it evolves over the next few years. ‘Given all the climate challenges we see around the world and the growing number of vulnerable communities and countries, the Fund can support them to become more resilient.’

Bilgischer said she is very grateful to her predecessors for the excellent work the Fund is doing, which enables them to make the right decisions. She congratulated the Secretariat and thanked the Board for the great trust placed in her. She also said she enjoyed her supportive role as Vice-Chair over the last year. Viñas thanked the Board and Secretariat for their enthusiasm and all their support and collaboration over the last year. Ms. Bilgischer also welcomed eight new Board members and alternates from Italy, Sweden, Malawi, Fiji, Argentina, Bahamas, Spain and Germany.A Dialogue with Civil Society was also held at the meeting, featuring presentations from Adaptation Fund NGO Network representatives from Benin, Ecuador and Germanwatch. Patricia Velasco, of Futuro Latinoamericano in Ecuador, said the Adaptation Fund project in Ecuador implemented by the World Food Programme in coordination with the Ecuador government is empowering vulnerable communities to build resilience to climate change through measures such as reforestation, natural protection of water resources, water storage, improving water supply infrastructure, flood defense and food security in the Pinchincha Province and Jubones River Basin.  “We can see positive changes in these two areas,” Velasco said. “Adaptation measures were directed to the most vulnerable communities. We want to change the quality of life there.”

Since 2010, the Adaptation Fund has committed about US$ 564 million for climate change adaptation and resilience projects and programmes, including 84 concrete localized adaptation projects in the most vulnerable communities of developing countries around the world with approximately 6 million direct beneficiaries. It also pioneered Direct Access, empowering countries to access funding and develop projects directly through accredited national implementing entities.