Washington, D.C. (September 25, 2018) — Knowledge sharing is a pivotal aspect of the rapidly evolving global climate finance space, and one of the growing pillars of the Adaptation Fund’s (AF’s) work as it shares valuable experiences from its actions across the world that are often breaking ground in climate change adaptation in the most vulnerable places for the first time.

It was evident throughout AF’s 5th Annual Global Climate Finance Readiness Seminar held last month in Washington, DC., in which 25 of its accredited national implementing entities (NIEs) gathered from across the globe to share best practices and lessons in developing effective projects. Participants from AF’s newest NIEs in Niger, Tanzania and Bhutan were among those who participated in the four-day workshop.

The workshop provided an interactive forum for NIEs to engage on areas such as monitoring and evaluation, stakeholder engagement, reaccreditation and applying AF’s environmental, social and gender policies in practice. An independent evaluation of the Fund in June reported that AF “has the potential to lead  knowledge management on adaptation”, and the workshop was no exception.

“The Adaptation Fund’s readiness workshops really give us a unique opportunity for peer to peer learning with other national implementing entities, which might be facing some of the similar challenges which our NIE in South Africa might be facing,” said Mpfunzeni Tshindane, of the South African National Biodiversity Institute, AF’s NIE in South Africa. “A good example might be compliance with the Fund’s environmental and social safeguards. This really gives us a good opportunity to see how other countries are doing. SANBI recently developed a toolkit on how to comply with these safeguards and we shared it with the Costa Rican NIE (Fundecooperación para el Desarrollo Sostenible), which they felt was very useful. They translated it into [Spanish] which shows that the peer to peer readiness workshops brings the face to face exchanges to share skills.” 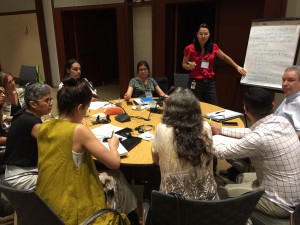 ecooperación, the NIE in Costa Rica, agreed. “These workshops have been excellent to be able to share with other national implementing entities that have the same challenges and opportunities,” she said. “We realized that SANBI in South Africa had developed a very interesting mechanism for the implementation of the environmental and social policy, and we were thinking of something similar. In the end, although we are all from different parts of the world we have similar challenges. There is a very big opportunity to cooperate and these workshops organized by the Adaptation Fund are key to be able to achieve that exchange. It’s not the same as exchanging emails. These person to person conversations allow us to be able to understand and know what each other is doing and what I can learn from you and how I can support you, as well. It’s extremely important.”

Collaboration among NIEs from the same regions is also fostered. “The NIEs have been building trust among themselves,” said AF Readiness Coordinator Farayi Madziwa. “We’ve been having these seminars for a number of years now. They are in a position to trust each other, to share information, policy documents about what they are doing, tools they have developed. They have also been driving an online community of practice, and even drove the workshop’s agenda.”

It is what AF’s pioneering Direct Access modality is all about. It empowers developing countries to lead adaptation projects and access climate finance directly through accredited NIEs based in the countries themselves. “The value of Direct Access is that it really channels money directly to NIEs in order to support climate change impacts,” said Mpfunzeni.

Feoli said local touch is the key. “Direct Access for us has had a great impact,” she said. “The closeness that we have with the AF as a national implementing mechanism is fantastic. We have a great flexibility and a great trust and that has helped us to be able to implement the project in Costa Rica in a way that is much more adaptable to the local conditions. It gives us the possibility as a local organization that understands the context to create the network of organizations and alliances to be able to adapt the project in a better way and implement it more effectively to the reality and context that is happening.”

“It helps ensure that resources are having a greater impact,” added Darrel Audinette, of PACT, the NIE for Belize. “More funding will be invested in local communities and capacity building. But also from an international perspective, it allows Belize to contribute more at a national scale to the goals of the Paris Agreement. The current project in Belize has really been looking at how we manage ecosystems, looking at replenishment zones, especially fisheries, and how they can be affected by climate change. Taking action now, through sustainable harvesting and putting replenishment zones in place, creating alternative livelihoods so that the communities depending on the reef and water make sure they have alternatives.” 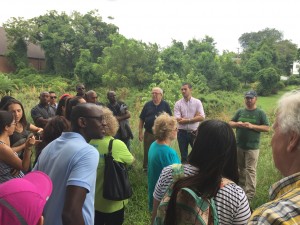 The seminar included its first-ever site visit to local adaptation projects in Washington, D.C., led by the city’s climate resilience office – which is part of the global 100 resilient cities initiative. Projects focused on watershed restoration in vulnerable and low-income communities to reduce flooding and storm water run-off were showcased. “This has really been an exceptional and unique opportunity to learn from one another in adaptation on the ground, and a chance to see commonalities,” Madziwa said.

Adaptation Fund Board Chair Victor Viñas praised the seminar for bringing NIEs together from across the globe to share experiences of tangible AF projects. “We see the rising urgency of climate change, such as in the record US$ 264 million in new project proposals received that the Board will take up next month,” he said. “So, it is gratifying to hear the impacts concrete Adaptation Fund projects are having on those most vulnerable to climate change. Sharing these experiences only serves to advance adaptation practice further as we try to reach many more vulnerable communities with concrete actions.”

“The Adaptation Fund community of NIEs has grown to 28 around the world, and Direct Access makes a positive impact for those countries and communities most affected by climate change. It also has a catalytic effect in creating models and experiences in those countries that often leads to additional climate projects, financing and enhanced planning,” said Mikko Ollikainen, Manager of the Adaptation Fund.

Kuldeep Singh, Deputy General Manager at the AF’s NIE for India, NABARD, said AF’s country capacity building work through Direct Access and its tangible projects have helped catalyze climate action at national levels such as India’s creation of its own National Adaptation Fund. “The Adaptation Fund created the sensitivity to addressing climate change and adaptation. Though these are small-scale projects, they really sensitize local stakeholders,” he said. “Adaptation Fund is a leader. At each country level, in the planning process climate action needs to be involved at the local planning level, at the city planning level, and every level so that adaptation interventions can be completed. The urgency is there.”

Since 2010, the Adaptation Fund has committed US$ 532 million including for 80 concrete, localized climate change adaptation projects in vulnerable communities of developing countries around the world, with over 5.8 million direct beneficiaries.