Washington, D.C. (May 6, 2019) — As part of its robust ongoing activities to share lessons and experiences from adaptation projects in the field, the Adaptation Fund (AF) will facilitate a ‘Country Exchange’ this week in Chile, partnering with its accredited national implementing partner in the country, the Agencia Chilena de Cooperación Internacional para el Desarrollo (AGCID).

Including AGCID, the five-day exchange will bring together 12 AF-accredited national implementing entities (NIEs) from around the world to visit firsthand the AF-funded adaptation project in Chile that is implemented by AGCID to help small rural farmers in the vulnerable dry O’Higgins region adapt and build resilience to climate variation, water scarcity and climate change that impacts the cattle, crops, water and soils they depend on.

Two days of project visits will be supplemented by three days of an interactive workshop, in which AGCID will share technical knowledge, details, and insights of the project. The country exchange will enable participants to interact and engage directly with beneficiaries and multiple stakeholders involved in the project from design to implementation, to monitoring and evaluation. Participants are also expected to share their own project experiences so that learning becomes a two-way process. The exchange is focused on the themes of “Water Management and Agriculture”, which touch upon key adaptation sectors across the participants’ countries. NIEs are expected to discuss commonalities in challenges faced and issues overcome or gaps encountered through the project development and implementation processes, as well as share innovative approaches applied in projects. 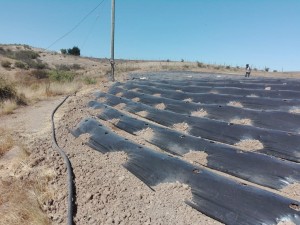 The Country Exchange further serves to build national adaptive capacities of countries that are most vulnerable to climate change through the Adaptation Fund’s pioneering Direct Access modality, which builds country ownership in adaptation by empowering countries to access AF funding and develop projects directly through NIEs.

“We are very pleased to have AGCID-Chile receive us for our first country exchange. This will serve as an excellent platform for national implementing entities from several different countries facing similar climate challenges to share knowledge in the project development process. It will ultimately serve to enhance adaptation actions on the ground in both current projects and those to come,” said Adaptation Fund Board Chair Ms. Sylviane Bilgischer. “The project in Chile is innovative in building capacities of small farmers through a variety of adaptation practices and tools to manage water, land and the farm sustainably while better managing climate risks. This type of learning exchange is also innovative in of itself, and we look forward to more such dynamic dialogues as we head toward COP25 in Santiago later this year.”

“For Chile and for AGCID in particular, this constitutes a very relevant milestone and an occasion of pride to receive the first mission of the exchange of experiences and knowledge for the NIEs of the Adaptation Fund. For us, it represents a recognition of the labor realized as a group, equally by both officials from AGCID and executors of the project,” said AGCID Executive Director, Ambassador Juan Pablo Lira.

The Country Exchange represents another quality way for the Adaptation Fund to continue to gather valuable experiences from its actions in the field over the 10-plus years it has been in operations. Very often AF projects are the first adaptation actions on the ground in many vulnerable places throughout the world.  Learning and Sharing represents one of AF’s three main pillars, alongside Action and Innovation, in its Medium-Term Strategy which it launched last year. 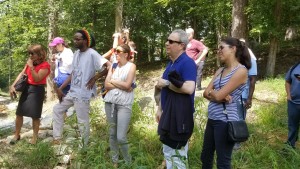 “The Adaptation Fund provides added value not only through the benefits to those most vulnerable to climate change through the concrete adaptation projects it funds on the ground, but also the invaluable experiences, lessons and models that it produces and stores in its knowledge base from those projects,” said Mikko Ollikainen, Manager of the Adaptation Fund. “Considering the tremendous global adaptation needs, this knowledge can have a ripple effect and serve as a base for others to learn from. The Country Exchange will add to that base, and we expect to produce several knowledge products from it.”

AF has previously held many climate finance readiness workshops in various countries, webinars and other related events that gathered NIEs to share lessons and knowledge in the project development and accreditation processes. It further provides readiness grants for technical assistance and south-south cooperation. This will be the first Country Exchange, and others on different adaptation themes are expected to follow.

Since 2010, the Adaptation Fund has committed about US$ 564 million for climate change adaptation and resilience projects and programmes, including 84 concrete localized adaptation projects in the most vulnerable communities of developing countries around the world with approximately 6 million direct beneficiaries. It also pioneered Direct Access, empowering countries to access funding and develop projects directly through accredited national implementing entities.