A group of youth on Praslin Island of the Seychelles is learning about harmful impacts of climate change on coral reefs and coral restoration actions. The workshop is part of the AF- funded coral reef restoration project carried out by UNDP and the Government of Seychelles. (Photo by Nature Seychelles)

Washington, D.C. (May 19, 2022) — As countries’ adaptation needs have grown, it is more important than ever to share knowledge of the Adaptation Fund’s work with the next generation and integrate youth in projects.

This is not only an important aspect of the Fund’s social policies and strategies, but many examples of projects funded by the Adaptation Fund (AF) include components of youth and young persons learning and helping to implement adaptation solutions – from coastal reforestation against sea level rise, climate-smart farming in areas affected by drought, to innovative methods to address extreme rainfall through rooftop water harvesting and reinforcing river banks with natural vegetation, among others.

As such, the Fund recently participated in an opportunity to ‘give something back’ when a couple of staff members delivered speeches on the importance of climate change adaptation and the Fund’s various grant programs and processes available for developing countries, at the H-FARM International School (h-is.com) as part of the school’s ‘Sustainability Day’ on April 26.

Based in Treviso, Italy, the school had contacted the Fund’s senior program officer, Ms. Silvia Mancini, an Italian national, back in March to gauge the Fund’s interest in participating in the event.

Ms. Cristina Mocanu, the school’s CAS and Ignition Lab Coordinator, reached out to Mancini with the idea to involve the Fund in the event after reading an interview in a weekly women’s magazine and Saturday supplement of the Italian national daily newspaper La Repubblica. The article had profiled Mancini and the Fund’s work earlier in the spring. 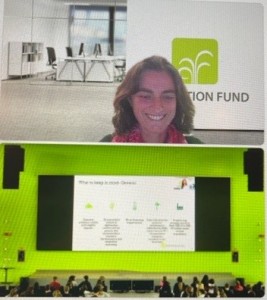 Ms. Silvia Mancini is giving a presentation to the students of the H-FARM International School.

Mancini jumped at the chance to participate, and delivered remarks together with another Adaptation Fund colleague – and also an Italian national – Ms. Martina Dorigo, the Fund’s climate change specialist, over zoom to 350 students from the school who range in age from 12-18 years old.

Mancini and Dorigo spoke amid a distinguished panel that included a CEO of a renewable energy company, young climate activists, and others in an agenda that was put together and organized by what Mocanu called a ‘brilliant group of students’ themselves.  After showing a video summarizing the Fund’s work, Mancini and Dorigo focused on climate finance access and the Fund’s projects for the most vulnerable communities.

After the morning educational sessions, the school’s students then applied some of the nature-based solutions to climate change they heard about, and engaged in tree planting activities during the afternoon around the school’s sprawling campus located outside of Venice, which was built on former farmland.

“This was such an extremely rewarding activity,” said Mancini. “The students were so pleased, asked questions afterward, and it was incredible to see so many of them listening as we spoke. They planted trees on the campus after we spoke, and it was really something special.”’

Dorigo agreed. “It was really great to participate in such a relevant and timely event, and also being from Gonars, a small town in Italy myself. It was an honor to sort of ‘go back’ in a way and give something back,” she said.

Although based in Italy, the school is actually an international institution and composed of students from around the globe. It is further an ‘Apple Distinguished School’, which is a designation for schools considered to be highly innovative centers of leadership and educational excellence ​and that demonstrate a vision for learning with technology.​

H-FARM draws its strengths from research and innovation to help prepare students to face today’s challenges in the world, and is enriched with approaches that develop digital and human skills, according to its website. It is aimed at empowering them with the right tools, while providing a community where personal development is emphasized and students treat each other respectfully and develop healthy camaraderie. Empathy in understanding different cultures and working together in a global society is also stressed. 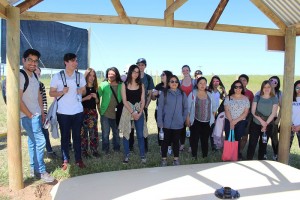 “Students must have the skills to work in a global context,” said Ms. YeSeul Kim, Head of K-12 in a video on the school’s website. “And I don’t mean learning languages, but also the empathy to understand different cultures. An international education gives you just that, exposure to different people and opportunity to work in teams that sets you up for success in an increasingly globalized society.”

That vision coincided nicely with the Adaptation Fund’s to empower the most vulnerable across the globe to adapt and build resilience to climate change.

“We are doing this for them,” said Mancini. “Our work is about the future. Young people are the future.”

“This was a great example of some of the activities members of the Adaptation Fund engage in at times to raise awareness of the importance of climate change adaptation and some of the project success stories on the ground and tools that are available to vulnerable countries to help address it,” said Mr. Mikko Ollikainen, Head of the Adaptation Fund. “Youth engagement is also a key aspect of both our Environmental and Social Policy, and five-year Medium-Term Strategy, while sharing knowledge is one of our strategic pillars so that we ensure we are raising awareness of effective adaptation solutions across the field and to the next generation.”

Since 2010, the Adaptation Fund has committed nearly US$ 912 million for climate change adaptation and resilience projects and programmes, including over 130 concrete, localized projects in the most vulnerable communities of developing countries around the world with over 33 million total beneficiaries. It also pioneered Direct Access and Enhanced Direct Access, empowering countries to access funding and develop local projects directly through accredited national implementing entities.