Young farmers harvest their carrots in Mangaia Island, the second largest of the Cook Islands as part of AF project “Strengthening the Resilience of our Islands and our Communities to Climate Change.”
(Photo by UNDP)

Washington, D.C. (January 20, 2021) — I was brought up with a deep appreciation for nature, being raised exploring rainforests in Brazil, diving in South Africa, and camping in the deserts of Jordan, accompanying my parents who worked in the field of international development. My drive to help protect the environment and assist vulnerable communities adapt to climate change did not arise from any political movement or popular figure in the media, but rather from being taught at a young age how crucial a role the environment plays in all of our lives. Being able to travel with my father allowed me to personally view how climate change has impacted various demographics in vastly different ways, with many at-risk areas not having the capacity to adequately deal with the health, economic, and political issues that often come hand in hand with such environmental challenges.

Inspired by this realization, I pursued a degree in human rights with a focus on environmental and climate justice at Columbia University, allowing me to learn about the many factors contributing to climate change that are putting lives and livelihoods at risk around the world. For example, in the Solomon Islands, entire villages have been wiped out and their populations forced to relocate as islands continue to lose massive amounts of land to rising sea levels. In Turkana County, Kenya, unstable weather patterns have left the region with substantially less rainfall, relegating communities that depend upon agriculture into crushing poverty.

By exposing me to the strategies necessary to remedy these harms and foster a sustainable relationship between people and the earth, and the organizations helping to implement them, my studies continuously and consistently drew me towards the Adaptation Fund – which is working to address the needs of vulnerable communities in developing countries through their comprehensive and innovative actions to empower countries to adapt and build resilience to climate change. In fact, it has concrete projects in both Solomon Islands and Kenya, among 114 total projects on the ground, that are doing just that!

The Adaptation Fund was of particular interest to me due to its strong focus on youth involvement in the development and implementation of solutions that empower the most exposed communities to adapt and build resilience to climate change. Given the many organizations that have attempted to create comprehensive initiatives without effectively taking the youth perspective into account, I was so thrilled and impressed at the Adaptation Fund, a group which proactively seeks to fund youth initiatives that are critical for the adaptation challenge to be overcome. The Fund fosters engagement and empowerment of marginalized groups, including children, women and girls, in its projects as one of the core principles of its environmental and social policy and one of the cross-cutting pillars of its Medium-Term Strategy, and has several projects that have strong involvement of youth. 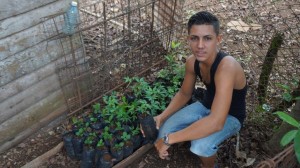 By providing grants for programs ranging from enhancing elementary school infrastructure through innovative rooftop rainwater catchment tanks and involving university students in designing adaptation solutions in Honduras, to providing technical training opportunities to students in Rwanda hoping to start businesses, to educating youth leaders on organic farming practices and traditional sustainable farming methods to enhance local food security in the Cook Islands, to fostering climate-resilient agricultural education for rural youth in Chile, the Adaptation Fund has a proven record of creating a space for young people in the realm of climate change adaptation, including fostering nature-based solutions and empowerment of vulnerable communities. A project in Cuba is also teaching the next generation by engaging many young people in restoring coastlines impacted by sea rise through mangrove planting and monitoring, and ecosystem restoration.

Recently, the Fund launched Innovation Grants for national implementing entities and others, new grant funding windows aimed at fostering and accelerating innovative approaches in adaptation, and some of the first projects awarded are focused specifically on youth. One of the first Innovation Grants received and approved, based in Armenia, is actually focused specifically on engaging young leaders in high school through a digital education module on adaptation challenges and best practices for youth with the purpose of nurturing future change makers. In fact, one of the key sector themes of the innovation grants is inclusion of youth in adaptation.

The concrete, impactful work of the Adaptation Fund has been recognized by many youth leaders, including Swedish climate activist Greta Thunberg, who donated her 25,000 EUR in prize money to the Fund and three other environmental organizations after being awarded the prestigious Freedom Prize last year. 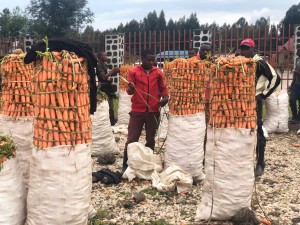 AF project in Rwanda supports vocational training for youth to develop alternative livelihoods in the face of climate change, such as carpentry, hairstyling and carrot—washing stations (pictured) which formed part of the project’s infrastructure. (Photo by AF)

Meanwhile JVE (Young Volunteers for the Environment), an organization with focus on youth operating in a variety of African countries, including Ivory Coast, has been engaging with the Adaptation Fund NGO Network. Founded in the early 2000s at the initiative of a small group of young students living in the village of Tsiko in a mountainous region of southern Togo, it has grown to a strong network represented in more than 22 countries and is considered the greatest youth environmental movement in Africa. Their mission is to educate, support and strengthen the capacity of youth to involve them in the process of sustainable development while ensuring social justice for all. Climate change and environmental education are among their priority areas.

“For a country like the Ivory Coast, seeing a project that will support family farming be supported by the Adaptation Fund is a great contribution to adaptation to climate change in our villages and is all the more important that it address agricultural issues. We will ensure, as a stakeholder Civil Society, that the entities responsible for the implementation make a point of honor to the integration of women and youth to ensure the resilience of communities,” said Ms. Nadège GAHY, Agroecology Manager at JVE Cote d´Ivoire. [There is a proposed AF-funded project for Ivory Coast and an approved technical assistance grant for its recently accredited national implementing entity, FIRCA].

Other organizations have also taken a particular interest in youth, demonstrating the deep need to engage this demographic to make lasting change. For example, the International Union for Conservation of Nature (IUCN) is hosting a virtual One Nature, One Future Youth Summit in February 2021 to bring together younger generations on the topics of nature and climate, completely organized and led by youth leaders.

“Young environmentalists are already leaders in many of their communities and are at the forefront of the movements to conserve nature and combat climate change. Through the One Nature, One Future Global Youth Summit and #NatureForAll Discovery Zone, IUCN seeks to strengthen connections among such young leaders and their existing global networks, infuse their voices in decision-making processes, amplify their stories and add further momentum to the growing youth-led movements for nature and climate,” said Camila Perez Gabilondo, Programme Officer for IUCN’s Commission on Education and Communication  and Youth Engagement Coordinator for the IUCN World Conservation Congress 2020.

Many youth organizations and individuals are part of YOUNGO, the Children and Youth official constituency to UNFCCC to engage in major UN climate conferences. They have a group on Facebook, and have conducted webinars here.

According to Zan Carraher-Kang, a student and researcher on sustainable development at Columbia University, “Youth engagement is of the utmost importance when developing solutions to our world’s most pressing environmental problems, because it’s the young people who will be living with the consequences of decisions made years ago and today.”

My biggest take-away is that one cannot underestimate the value of individual, family, and community action. We will each adapt as opportunities arise, and youth are beautifully positioned as agents of change as each of us is uniquely impacted by climate change today and are the curators of the future. There are many ways you can contribute: for youth, I encourage you to engage your local and national parliamentarians and urge them to make the legislative and policy changes needed to combat climate change. As well, you can join or support an organization working on these issues. There are also easy ways to donate directly online to the Adaptation Fund itself to support concrete country- and locally-led adaptation actions on the ground. Whether by giving your time, money, or ideas, there are many ways to contribute. I also hugely encourage all organizations to actively engage youth in every facet of their work, as we young people have shown that we bring a passion, commitment, energy, and problem-solving know-how to everything we do. It will take an intergenerational partnership to truly mainstream the climate change solutions we need for a healthy planet and healthy people. 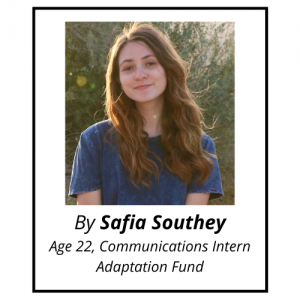 When we talk about the many communities that the Adaptation Fund works with, it becomes clear that they are profoundly diverse. It has been a joy to intern with an institution that is truly committed to addressing the issues that accompany climate change at such scale, and to implementing its programmatic vision with a sensitivity towards and desire to empower those who are often most marginalized–poor communities, Indigenous Peoples, women, and of course, the youth.