Adaptation Fund Year in Review: 2017 Key Highlights and Accomplishments with a Peak Ahead to 2018

The year culminated in a milestone decision at the COP 23 UN Climate Conference in November, when Kyoto Protocol member countries decided the Fund ‘shall serve’ the Paris Agreement. The Fund also broke its single-year resource mobilization record when it raised some US$ 95.5 million in new pledges from six different contributors.

The Fund continued to receive record demand in 2017 for new adaptation projects, reflecting the rising seas, floods, droughts and storm intensity impacting countries throughout the world. In response, the Fund’s Board approved a record US$ 60 million in new project funding in March and nearly US$ 105 million for the year.

The Board also adopted a Medium-Term Strategy based on the strategic pillars of Action, Innovation and Learning – enhancing the Fund’s mission to support country-driven, pioneering adaptation projects while sharing its valuable experiences to scale up and replicate its work.

2017 further marked significant growth in the Fund’s climate finance readiness activities, with its south-south cooperation program leading to the accreditation of Banque Agricole du Niger as the 27th National Implementing Entity (NIE) under its pioneering Direct Access modality. In July, the Fund also held its annual global NIE seminar for the first time in a developing country, Costa Rica, and in October, it convened 15 countries from across the Caribbean in a climate finance readiness seminar in Barbados. Two readiness webinars were held in April and December, sharing best practices in monitoring and evaluation of adaptation projects.

The Fund concluded 2017 on a high note as implementing partners, contributors, civil society and stakeholders gathered at the historic Old Town Hall in Bonn, Germany to commemorate the 10th anniversary of the launching of its operations.

With growing momentum for the Fund, expectations are high for an equally successful 2018. A key follow-up decision is due at COP24 this December, based on preparatory work to serve the Paris Agreement that is well underway. The Fund will have an active presence at the premier international Adaptation Futures conference to connect countries and accelerate climate action in June in South Africa, which is also home to two innovative Fund projects. Furthermore, the Medium-Term Strategy and its implementation plan are likely to bring new opportunities in 2018 to support learning and innovation, which will be discussed at the 31st Adaptation Fund Board meeting in March.

As the Adaptation Fund embarks on a promising 2018 for the vulnerable countries it serves, here is a look back at its top stories from 2017:

Adaptation Fund ‘Shall Serve the Paris Agreement’, As CMP 13 Parties Formally Recognize its Concrete Actions to Most Vulnerable

November 2017 – The Adaptation Fund accomplished great results in the progress towards its longstanding goal to formally serve the landmark Paris Agreement, when near the conclusion of the COP 23 UN Climate Conference in Bonn, member countries of the Kyoto Protocol decided that the Fund “shall serve” the Paris Agreement in a milestone decision for the Fund and the vulnerable countries it serves.  Read more >

October 2017 – The Fund received a record 33 project proposals for its Board meeting in October, and 54 total proposals on the year amounting to over US$ 350 million. The urgency to address climate change continues to rise, as vulnerable countries face rising seas and increasing floods, droughts and storm intensity.  Read more >

November 2017 – An Adaptation Fund side event during the COP 23 UN Climate Conference brought together speakers from Fiji, Antigua and Barbuda, Argentina, Tanzania and the World Food Programme to discuss concrete examples of Fund projects to the most vulnerable communities and applying environmental and social principles (ESP) that further enhance adaptation actions. The Adaptation Fund’s ESP, adopted in 2013 and further enhanced through a streamlining gender policy in 2016, was fostered in 2017 through readiness seminars, small grants, forums and NIE communities of practice. The policy was previously cited by the UN Special Rapporteur on human rights and the environment as a possible international model for its exemplary safeguards.  Read more >

Adaptation Fund Side Event at COP23

March 2017 – The Adaptation Fund Board approved a record US$ 60.3 million in new project funding at its Board meeting in March, and nearly US$ 105 million for the year. The Board also approved the first regional project under its innovative Funding Window for Regional Projects and Programmes, and approved two more later in the year. The Board further named Mr. Mikko Ollikainen as the Fund’s second Manager in its history.  Read more >

October 2017 – The Medium-Term Strategy adopted in the 30th Adaptation Fund Board meeting represents an important and decisive action by the Board that will influence its work over the next five years. It outlines and fosters the mission of the Fund to support vulnerable developing countries in adaptation, based on three strategic pillars: action, innovation and learning.  Read more >

November 2017 – The Adaptation Fund celebrated the 10th Anniversary of the launching of its operations with a special event at the historic Old Town Hall in Bonn, Germany on November 16, 2017. Co-hosted with the City of Bonn and moderated by Adaptation Fund Board Chair Michael Kracht (Germany), the event featured speeches from prominent international climate leaders and commemorated the Fund’s achievements over the years.  Read more >

November 2017 – The Adaptation Fund Board accredited the Agricultural Bank of Niger (Banque Agricole du Niger, BAGRI) as the 27th National Implementing Entity (NIE) under its pioneering Direct Access modality. It also marks the first accreditation to result from the Adaptation Fund’s South-to-South Grant Programme, which provides opportunities for developing countries seeking accreditation to receive peer support through the application process from an NIE that is already accredited with the Fund. In this case, the Centre de Suivi Ecologique (CSE) of Senegal – the Fund’s first accredited NIE which has designed and implemented two coastal zone management projects – provided peer support to BAGRI through a US $50,000 grant from the Fund. BAGRI’s accreditation will help Niger, which is extremely vulnerable to drought, adapt and build resilience to climate change.  Read more > 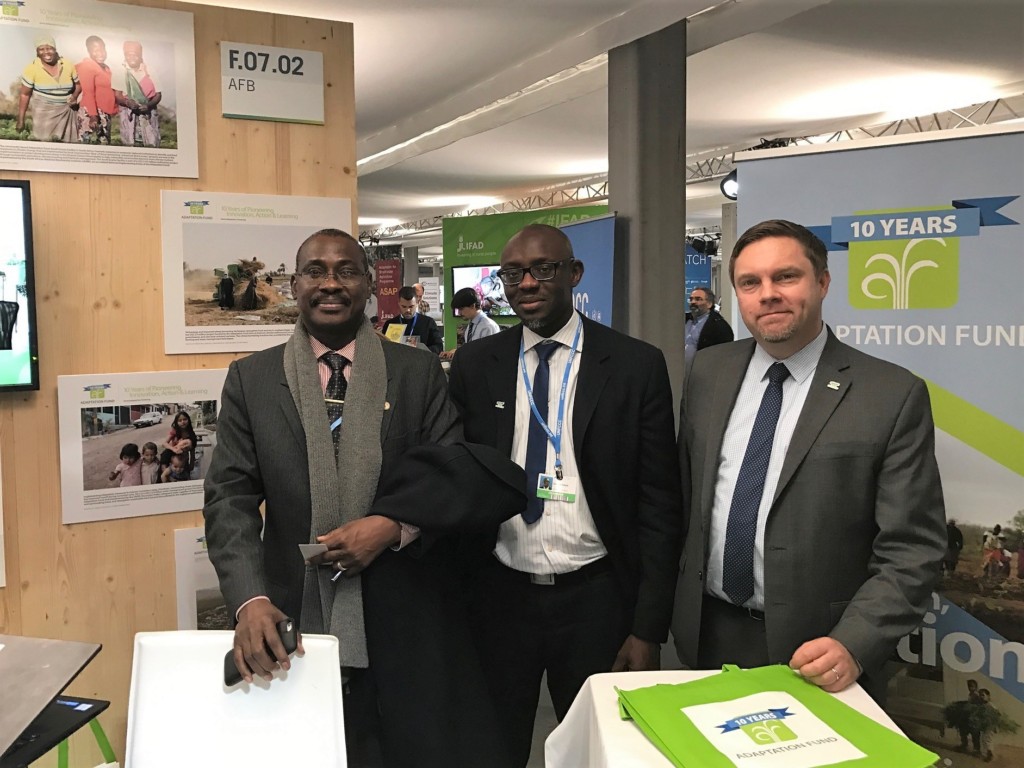