The Adaptation Fund has piloted a new video to illustrate its project in Antigua and Barbuda in a virtual 360-degree environment.

The 360-degree video was filmed last year as part of the Fund’s visit to the project sites in Antigua and for its 6th Annual Climate Finance Readiness Seminar held there at the same time. More than 20 of the Fund’s national implementing entities (NIEs) gathered to see the Antigua and Barbuda project in person, as well as share their own experiences and lessons from adaptation projects throughout the globe.

It was co-hosted by the Fund’s accredited NIE in Antigua and Barbuda, the Department of Environment (DoE), which also implements the US$ 10 million project. The project is implemented under the Fund’s pioneering Direct Access modality, which builds country ownership in adaptation by empowering countries to access funding and develop projects directly through locally based NIEs.

Locals of the Caribbean small island developing state say they have been experiencing more frequent and intense hurricanes and rainfall in recent years, including Hurricane Irma which devastated Barbuda in September 2017 — destroying most properties and forcing evacuation of all 2,000 of its residents to Antigua. 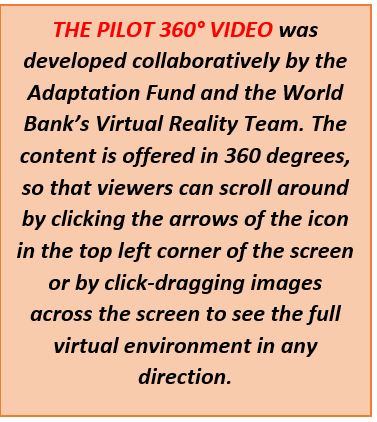 It is within this context of increasing vulnerability to climate change that the project funded by the Adaptation Fund has been making a mark.

It is restoring natural drainage canals and ponds in Antigua’s vulnerable northwest coastal McKinnon’s watershed to help communities adapt to sea rise, increased flooding and resulting stagnant water pools that have become mosquito vectors. “Here you see the problem of stagnant water, insufficient size of drainage,” said Adien Greenaway, DoE project technical officer, pointing at a section of McKinnon’s waterway that will be improved through the project. “Because of the small culverts it creates flooding and stagnation of water.”

Elaine Nedd Perry, a longtime resident in Yorks Village, says it was very difficult to obtain a regular loan so she hopes the new 1-2 percent loan will protect her home from flooding. “There are more storms, it is worse every year,” she said from her front step. “The loan is going to help me a lot because when the water comes down, I get sometimes 12, sometimes nine inches of water here in the house. I hope the program will help me to raise the house higher up, and help control the water from getting into the house.”

The project is further supporting community groups in depressed areas with grants to develop climate-resilient buildings to serve as storm shelters, which will include backup power supplied by renewable energy and pumping and storage equipment for rainwater harvesting. One of the groups to receive a grant is Saint Francis of Assisi Church, which will serve as a storm shelter for the Good Shepherd Home for Girls located behind it as well as nearby seniors, disabled and other vulnerable residents.

“It will be a great help for us,” said Paulette Daniels, a caretaker at Good Shepherd, which houses 15 young girls. “We will be safer. Our house isn’t able to withstand a hurricane because we have leakage in the home.”

Meanwhile, the five-day interactive seminar furthered the Fund’s exchange of knowledge and ultimately adaptation practices on the ground through its community of practice of NIEs. The annual seminar is normally held in person in different countries. This year will be an exception, as the annual gathering will be held virtually for the first time this August due to the ongoing COVID-19 global pandemic.

For a link to the video on the WB Open Learning Campus, click here.