Bonn, Germany (March 14, 2019) — The opening of the 33rd Adaptation Fund Board meeting here featured the annual passing of the torch in Board leadership, as Ms. Sylviane Bilgischer, of Belgium, became its newly elected Chair.

She served as Vice-Chair for the past year, and takes over as Chair from Mr. Victor Viñas, of the Dominican Republic, who oversaw a successful year in which the Fund formally became part of the Paris Agreement and raised a record US$ 129 million for the vulnerable countries it serves.

The Board rotates leadership each year between developing and developed countries. Mr. Ibila Djibril, of Benin, who represents Africa on the Board, was elected Vice-Chair.

Ms. Bilgischer works as Climate Policy Advisor for the Walloon Minister in charge of Climate (Belgium), and has represented Annex I Parties (developed countries) on the Adaptation Fund Board for two years. She has held various government positions and served as delegate to UNFCCC international meetings. She holds two Master’s degrees and brings five years of field experience working in Peru as a programme officer for the United Nations Development Programme.

The Adaptation Fund Board Secretariat interviewed Ms. Bilgischer about her hopes for the Fund:

What is your vision for the Fund over the next year?

Over the next years, the challenges faced by communities will continue to grow and could reduce the progress made so far in some of the UN Sustainable Development Goals within the current context of global warming. All sectors should be involved in meeting this challenge: from agriculture and livelihoods to housing and transport infrastructure. I see the Adaptation Fund (AF) as a main channel to support adaptation in vulnerable communities around the world. This means that the Fund would continue to help countries and communities enhance their adaptive capacities, strengthen their resilience and reduce their vulnerability to climate change with a view to contributing to sustainable development and ensuring an adequate adaptation response toward meeting the goals of the Paris Agreement, which aims to help set countries on low emissions and climate-resilient pathways.

My predecessors would say that the Adaptation Fund is doing the right things right. I totally agree with that, and that was confirmed by the latest overall evaluation of the Fund. But this is part of the Fund’s continuous improvement process to ensure efficiency, effectiveness and relevance.

I also envision that the Fund can make an even more significant contribution and help a higher number of the projects’ beneficiaries benefit from education and capacity building to increase climate change resilience. We must strengthen cooperation and linkages with other funds and institutions to facilitate the up-scaling of its high-quality projects and programmes.

With the AF now officially serving the Paris Agreement, what does this mean for the Fund?

The AF was a very important part of the COP 24 discussions in Katowice, Poland this past December. There was broad recognition that the AF is a key player in adaptation finance. 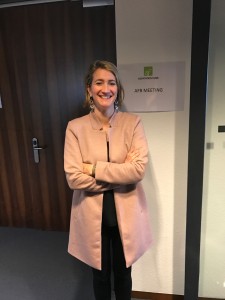 That decision followed a similar one made by the Conference of the Parties serving as the meeting of the Parties to the Kyoto Protocol (CMP) at COP 23 in Germany when CMP decided the Fund shall serve the Paris Agreement pending decisions by CMA at COP 24. The CMP took note of CMA’s decision at COP24, which brings the two into alignment.

The milestone decision will help stabilize the Fund as it transitions from the Kyoto Protocol to the Paris Agreement, and recognizes its valuable niche in funding concrete adaptation projects for the most vulnerable. It also validates the excellent work of the Fund over the past 11 years. Its pioneering Direct Access modality continues to build country ownership in adaptation, and this decision will further the Fund’s progress and help us reach many more vulnerable communities with urgently needed adaptation solutions.

CMP also requested the Adaptation Fund Board to consider the Board’s rules of procedure, institutional arrangements of the Fund with respect to the Paris Agreement and any other matters to ensure the Fund serves the Agreement smoothly. We will initiate this work at this Board meeting to complete it before COP 25 in Chile. This Board meeting will be somewhat exceptional since for the first time, the Board will be operating under the authority and guidance of both the CMP and CMA.

I don’t expect major changes at least regarding arrangements with the Global Environment Facility (which hosts AF) and the World Bank (which serves as its trustee). However, we will be attentive to the representational aspects of different Parties to the CMA in order to accommodate them on the Board.

What would you like to stay the same and see the Fund do differently (if anything)?

The phase 2 independent evaluation of the Fund that was carried out last year has confirmed that the Fund has grown up as a relevant, efficient and effective institution. This is key to accelerate the dissemination of innovative, proven and effective adaptation solutions.

Having some projects already completed, it is important to harvest this experience and knowledge generated through project activities and to disseminate them as selling points to seek additional and future support among stakeholders.

This makes sense in the context of the very high number of project submissions. The demand for adaptation projects and programme funding is ever-increasing, especially as climate change impacts are impacting vulnerable countries more often and harder, thus creating a tremendous fiscal strain on their national budgets. I believe the Fund’s projects need to serve as leverage for higher and more ambitious investments and programmes from different sources.

With the Fund’s experience and trust earned over these past 11 years, its well-received concrete projects, experiences and innovations and its vast and growing supportive network, this can help to encourage and accelerate the dissemination of innovative, proven and effective adaptation solutions. The Fund is well-positioned to look into further innovative approaches to adaptation action.

The Fund raised a record in new funds this year, how can it sustain this level of mobilization to meet its growing project pipeline and demands going forward?

The first way to sustain the level of mobilization is to continue providing good value for the money. In other words, the Fund should continue to be a relevant, efficient and effective institution.

These last years, the Board has focused on broadening the base of contributors from public institutions. Results at COP 24 exceeded expectations with pledges coming from nine different contributors and the Fund surpassing its resource mobilization goal of US$ 90 million with US$ 129 million raised – a new single-year AF record!  We saw first-time contributors New Zealand (NZ$ 3 million) and the European Commission (10 million EUR) come forward. It marked the first contribution by the Commission to any climate fund under UNFCCC, and New Zealand’s was the first the Fund received from a government outside Europe.

This follows the view that climate change concerns all citizens and levels of institutions, including sub-national levels, as is the case with the Regions of Belgium. The Walloon, Flemish and Brussels-Capital Regions want to contribute to support the most vulnerable communities in developing countries around the world which face urgent challenges related to climate change adaptation.

Those three regions have committed about US$ 30 million to AF since the Brussels-Capital Region initially came forward in 2013 with the first contribution to a multilateral climate fund from a regional government. This trend has become crucial as subnational governments, the private sector and national governments more often are collectively addressing overwhelming global climate finance needs and the rising urgency to adapt to climate change.

CMA’s decision that the Fund shall serve the Paris Agreement as of January 1st, 2019 also brings stability to the Fund as an institution after 2020 when the Kyoto Protocol will no longer exist.

Nevertheless, the Fund will continue to face challenges related to funding uncertainties. Its revenues from a share of proceeds through Certified Emission Reduction credit sales of Kyoto Clean Development Mechanism (CDM) projects have dramatically decreased since demand in the carbon market dropped several years ago. A study by the AF NGO Network and New Climate Institute confirmed that a new mechanism is needed to secure a basis for robust and consistent operations of the Fund, and that the international carbon market would be a relevant option. This part of the rulebook of the Paris Agreement is not finished yet as negotiations on future carbon markets have not come to an agreement. It will be at the center of negotiations in Chile.

In the meantime, CMA and CMP decided the Fund will continue to be financed from a share of CDM proceeds and will exclusively serve the Paris Agreement when proceeds under a similar sustainable development mechanism called for in the Agreement become available.

AF’s resource mobilization strategy (adopted in October 2016 with Board-set annual targets) aims to mobilize resources from various public, private and innovative sources. A great strength of the AF is to be able to tap them all.

For example, it is possible for anyone to easily donate directly online through the AF website.

Additionally, AF can build upon the type of successful, innovative private-public collaboration it had with Visa and UNFCCC during COP 24, where users ‘tapped’ a generic Visa card on an interactive platform to digitally enhance ecosystems and improve people’s lives. It resulted in nearly 20,000 taps, raising more than US$ 67,000 for AF.

In my view, it will be a mix of funding channels. This makes the Fund more resilient!

What do you like most about AF, and what are your perceptions of how the Board works as a group?

It is quite an honor to be trusted in being a member of the Board and to serve as Chair of the Adaptation Fund Board.

The Fund is instrumental in building national capacities for implementing entities in line with the principle of country ownership. It has pioneered direct access as a modality for project implementation in promoting country-owned and country-driven processes, building capacity and strengthening local institutions.

The first time I attended a Board meeting, I was very positively surprised by the Board’s collegiality and good spirit. In addition, I was impressed by the quality of the exchanges between the members and the will of all to make decisions based on consensus. The great expertise of the Secretariat facilitates the understanding of the issues and different options to solve them. This support is key to ensure that Board members make informed decisions based on comprehensive and quality documentation.

This may seem insignificant, but Board members know each other’s first names and use them frequently in exchanges. This makes for a nice and productive atmosphere.

At every Board meeting, we have an exchange with civil society through an AF NGO Network dialogue. I find these exchanges particularly interesting because they allow us to have feedback from the field. At the COPs, the exchanges deal with very institutional issues that are sometimes almost “dematerialized” or disconnected from what happens on the ground. On the opposite side, exchanges with civil society constitute a bottom-up flow. I really enjoy having them, and look forward to more in the year to come.

Since 2010, the Adaptation Fund has committed about US$ 532 million for climate change adaptation and resilience projects and programmes, including 80 concrete localized adaptation projects in the most vulnerable communities of developing countries around the world with approximately 5.8 million direct beneficiaries. It also pioneered Direct Access, empowering countries to access funding and develop projects directly through accredited national implementing entities.