Bonn, Germany (March 16, 2017) — The annual passing of the gavel at the 29th Adaptation Fund Board meeting took place this morning when Michael Kracht, 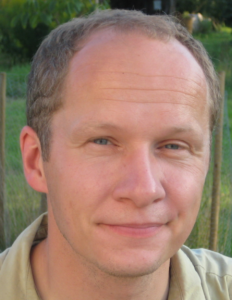 of Germany, officially became the new Chair as the March 16-17 meeting got underway here in Bonn.

Kracht assumed the Chair seat from Naresh Sharma, of Nepal, who completed his one-year term. The Chair position rotates between developing and developed country board member representatives each year.

A board member since 2014, Kracht served as Vice-Chair for the last year.  He was elected to be the new Chair at the last board meeting in October.

A German national and Berlin resident, Kracht has worked for Germany’s Federal Ministry for the Environment, Nature Conservation, Building and Nuclear Safety (BMUB) since 2001. He has held various positions in the ministry, working his way up from a desk officer integrating environmental aspects into international financing to serve as deputy head of environment and climate policy in the G8 process and international climate negotiations. Most notably he spent the last six years coordinating the International Climate Initiative, BMUB’s bilateral climate financing program which aims to catalyze and strengthen partner countries’ abilities to adapt to climate change and foster low-carbon development with concrete actions on the ground and through processes at the United Nations Framework Convention on Climate Change. Prior to BMUB, Kracht earned a Master in Environmental Law, qualified as a Legal Assessor and worked at a firm specializing in environmental law.

The Adaptation Fund interviewed Mr. Kracht in early March to ask his thoughts and vision of the Fund going forward.

The Fund was productive at COP22 in Morocco, successfully surpassing its 2016 resource mobilization goal while conference parties also strengthened language around its inclusion in the Paris Agreement. The positive outcomes reflect growing recognition of the Fund’s value in operationalizing the Paris Agreement through its concrete projects and pioneering finance mechanisms like Direct Access that help countries build capacity to adapt to climate change. What are your reactions and hopes on next steps for the Fund’s resourcing strategies and the potential of ultimately serving the Paris Agreement?

Indeed, the Marrakech conference was a success. The international community has sent out a clear signal in Marrakech: The Paris Agreement is working. Parties now focus on implementing and operationalizing the outcomes of Paris. This is also true for adaptation and for the Adaptation Fund in particular. The Adaptation Fund (AF) was a very important point in the Marrakech discussions. There was broad recognition that the AF is a key player in adaptation finance. Given that the AF has its roots under the Kyoto Protocol, it is well noted that in its first substantive decision the CMA – the meeting of the Parties to the Paris Agreement – ensured that the AF should find its home under the Paris Agreement. In the coming months, the necessary work – addressing governance issues, institutional arrangements and operating modalities – needs to be completed. With the momentum from Paris and Marrakech, I am sure that this preparatory work will lead to a timely and sustainable solution.

In Paris, it was also agreed to provide continuous and enhanced international support to developing country Parties for the implementation of adaptation efforts. There are various sources – public, private and innovative – of international climate finance. The AF strives to tap them all. It is possible for everyone to donate directly via the AF website. In its beginning, the Fund was mainly financed by innovative sources from the international carbon market. In recent years this had to be complemented and even exceeded by contributions of donor countries: last year, newly pledged contributions for the Fund amounted to about US$ 81.5 million – surpassing the 2016 fundraising target of US$ 80 million. Yet it is unclear how the finance gap for the coming years – both pre-2020 and post-2020 – can be closed. Again, in my view, it will be a mix of funding channels. In the coming years, the focus will continue to be on governmental contributions. But something is also needed to secure a basis for robust and consistent operations of the Fund. One option, which is familiar for the AF, should be innovative finance from the international carbon market, as highlighted in a recent study by the AF NGO Network and the New Climate Institute.

In general, the AF is doing the right things right. The independent evaluation of the Fund has confirmed that the AF has grown up as a relevant, efficient and effective institution. It should stay on its path. There is a clear need for funding more adaptation measures globally as climate change is putting communities and ecosystems under pressure. As a consequence, the AF should continue and increase financing of concrete adaptation projects and programmes. Building capacity in national, but also regional and subnational institutions to implement adaptation projects is a major output of AF activities. With its comparatively small projects up to US$ 10 million, the AF covers a strategic niche with a very close relationship between the multilateral, national and local levels. Projects are hence tailor-made and contribute to capacity-building and ownership. At the same time, the Fund should further enhance its cooperation and linkages with other funds and institutions to facilitate the upscaling of its high-quality projects and programmes.

With its experience and network, it can help to encourage and accelerate the dissemination of innovative and effective solutions to adaptation. Therefore, the Fund is well-positioned to look into innovative approaches to adaptation action. And it is also important to better harvest the knowledge generated through project activities and to spread this knowledge among stakeholders. We are currently discussing a medium-term strategy for the Fund, where we look into existing and possible new mechanisms for action, innovation and learning.

What do you like most about the Fund and its work?

It is a pleasure and an honor to work with the Adaptation Fund, helping to deliver tangible results for those affected by climate change. With its strategic priority on serving the most vulnerable in developing countries, the Fund has a clear orientation. The AF has a remarkable track record over the last 10 years. This could only be achieved because there is a hard-working team in the AF’s secretariat. As a member of the AF’s Project and Programme Committee, I appreciate the valuable discussions on concrete projects. It is good to see people and institutions working together to find and implement solutions to fight global warming. We have a very cooperative working atmosphere within the AF Board. I think this demonstrates that the focus of this multilateral fund is on results in order to help vulnerable communities in developing countries adapt to climate change.

Another important feature is the Fund’s openness and transparency. All projects and even project proposals under review are posted on the AF website. There is an active network of NGOs participating in Board meetings. The AF was the first climate fund to sign up to the International Aid Transparency Initiative (IATI) Standard. I very much like the ambition of the Fund to move things forward and push ideas to become mainstream.

The upcoming COP23 this November in Bonn will mark the Fund’s 10-year anniversary since it was established through a decision at COP13 in December 2007 in Bali. What are your thoughts as far as what this milestone means for the Fund, and its value moving forward within the larger global climate finance space?  What are a few key top achievements of the Fund that stand out so far over the years?

The Adaptation Fund contributes critical elements to the climate finance landscape. The Fund is instrumental in building up national capacities for implementing entities in line with the principle of country ownership. It has pioneered direct access as a modality for project implementation – promoting country-owned and country-driven processes, building capacity and strengthening local institutions. The Fund accredited its first national implementing entities in 2010 under direct access. It has since accredited 25 NIEs in all and set the methodological stage for direct access modalities as introduced by the GEF and the GCF. In 2014, it created its Readiness Programme to strengthen the capacity of implementing entities to receive and manage climate financing. The programme offers technical assistance and south-south cooperation grants, and several workshops each year to help guide entities through the accreditation and project development processes.

The Fund demonstrated quickly that it is delivering. Already in 2010, the AF Board approved the Fund’s first two projects in Honduras and Senegal later that year. The Fund’s concrete, localized effective adaptation and resilience projects have become a hallmark of the Fund. Since then, the Fund has committed US $357.5 million to support 55 projects in 48 countries supporting more than 3.7 million direct beneficiaries.

The Fund also established a model in monetizing carbon emission reduction credits for adaptation through a levy on UN Clean Development Mechanism projects, raising nearly $200 million through the mechanism to date – mostly during peak carbon market years up to 2011. It’s an example of the type of innovative experience that the AF could potentially apply in future years to emerging components of the Paris Agreement.

As the Board’s representative from Germany, how do you see Germany’s role and importance as a leader in climate change and adaptation while being the Adaptation Fund’s largest donor, and particularly with the COP23 conference being held in Germany later this year?

Paris has greatly boosted awareness of climate action. The international community has set clear targets to restrict global warming and aims for greenhouse gas neutrality in the second half of this century. The implementation and continuous upgrading of nationally determined contributions lies in the center of the Paris Agreement. Implementing Paris will be a learning process in the quest for the effective and sustainable solutions to combat climate change. As a country with advanced infrastructure and eminent potential in technology, Germany is in a particular position to demonstrate that the transformation towards climate neutrality works and has many economic benefits. The Climate Action Plan 2050 adopted in November 2016 is the first government document which maps out the way towards achieving close to greenhouse gas neutrality in Germany by 2050. The plan sets out climate targets for individual branches of industry and provides guidance for strategic decisions over the coming years.

At the international level, Germany has been one of the biggest partners of developing countries and emerging economies in cooperation on climate change mitigation and adaptation. In the Roadmap to US$ 100 Billion, Germany recalled that it aimed at doubling its international climate finance by 2020 compared to 2014. In that respect, we seek for a balance between mitigation and adaptation. Contributing to the Adaptation Fund has been proven to be a good value for the money and at the same time addressing a priority and need of many developing countries. The German government has been a driving force in the international climate process, for example by organizing the annual Petersberg Climate Dialogue. The focus in the UN climate process now is on implementing and operationalizing the Paris Agreement. COP23 will be held at the Bonn headquarters of the UN Climate Secretariat. Federal Environment Minister Barbara Hendricks is convinced that we will put on a successful conference in close cooperation with the Fiji presidency, the Climate Secretariat and with all others involved.