These are among the newest types of grants offered by the Fund through its five-year strategy focused on the pillars of Action, Innovation and Learning and Sharing. They are offered to vulnerable countries above and beyond its regular country projects to help address the urgency and scale of climate change, and rapidly growing demand for the Fund’s work.

Global and country leaders convened at Climate Dialogues organized by UNFCCC on Dec. 3 to discuss the importance of the Fund’s contributions to serving the Paris Agreement.

The UNFCCC convened a special Dec. 3 event during the Climate Dialogues that featured global- and country-level climate leaders discussing the importance of the Fund’s contributions to serving the Paris Agreement through these novel approaches and its concrete work on the ground that continues to empower the most vulnerable. (Find UNFCCC recording of the event here.) The Fund’s advances in contributing to climate action will be assessed next year by the Subsidiary Body for Implementation, which helps guide progress in addressing countries’ adaptation needs and building momentum for enhanced action on the ground.

“We are extremely proud of the growth and ability to adapt of the Adaptation Fund, with programmes in more than 100 countries including now close to 115 concrete projects on the ground, pioneering Direct Access modality that builds country ownership in adaptation, and additional grant pathways that are helping countries build resilience to climate change as well as environmental, health and economic risks that are even more profound in the context of the COVID-19 pandemic,” said Mr. Ibila Djibril, Chair of the Adaptation Fund Board.

Since its creation in 2001 and launch in 2007 the Adaptation Fund has been delivering effective adaptation projects and programs to the most vulnerable to climate change while building an essential role in the international climate finance landscape.

It has pioneered innovative climate finance modalities such as Direct Access and Enhanced Direct Access that build national adaptive capacities and has accredited 32 national implementing entities (NIEs) to date, half of which are in small island developing states or least developed countries. Several were accredited under the Fund’s streamlined accreditation process for smaller entities, which opens doors to nations that otherwise may not have been able to access needed climate finance.

In all, the Fund has accredited 52 implementing entities with the capability to identify and implement crucial adaptation projects across the globe. Its readiness programme organizes workshops, webinars, technical assistance and south-south cooperation grants to help guide entities through the accreditation process, as well as share project experiences to further effective adaptation practices on the ground.

The Fund has grown rapidly to nearly 115 concrete adaptation projects and nearly US$ 800 million committed to:

In addition to its concrete projects, it is implementing the new tools and grants through its five-year Medium-Term Strategy begun in 2018. These include action grants that are scaling up effective projects; small and large innovation grants through AF’s Innovation Facility that are fostering and accelerating innovation by testing new adaptation tools and technologies and building an effective scalable base; and learning grants that are disseminating knowledge in adaptation – all with the aim to enable transformational impact.

These small grants (up to US$ 250,000 each) are currently available to NIEs, with several scale-up, innovation and learning grants having already been awarded and underway.  Another US$ 10 million in innovation grants were also recently launched through the Adaptation Fund Climate Innovation Accelerator — funded by AF and implemented by UNDP and UNEP/CTCN — and are available to a wider range of stakeholders, including governments, community groups, entrepreneurs, civil society, young innovators, and others.

In late October 2020, the Fund’s Board further approved a window for large innovation grants up to US$ 5 million each and a dedicated funding window for Enhanced Direct Access (EDA), which builds on Direct Access by empowering NIEs to directly identify and fund local adaptation projects. It will build on pioneering AF-funded EDA projects in South Africa, Costa Rica, Federated States of Micronesia and Antigua and Barbuda.

Similar to the Fund’s window for regional project funding, all of these new funding windows are offered to countries on top of regular country project funding.

“The Adaptation Fund serving under the Paris Agreement increases opportunities for communities to adapt to the adverse effects of climate change. With this development, the Adaptation Fund can build on its enviable track record of delivering innovative finance for concrete action on the ground. We must continue to strengthen these efforts and enable the Fund to provide greater access of needed adaptation finance to developing countries,” said Mr. Daniele Violetti, Director, Means of Implementation, UNFCCC.

All the while the Fund continues to empower the most vulnerable groups, including women, youth, indigenous groups and others, while promoting human rights, biodiversity, inclusion and transparency through all its programmes.

Its projects are often the first on the ground in many vulnerable places throughout the world and are creating valuable models that have been scaled up and replicated with financing from other climate funds. This has happened in several instances, with Fund projects in Senegal, India, Rwanda, Colombia, Georgia, Maldives, Pakistan, Ethiopia and others later being later scaled up or replicated by other funds. 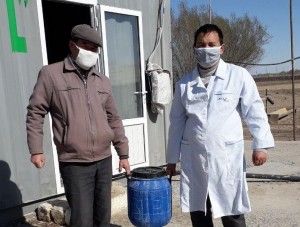 In Uzbekistan, self-sustaining greenhouses were established by the AF project to empower families to stay safe during the pandemic. (Photo by UNDP Uzbekistan)

Other projects are helping to build broader resilience to climate change and the pandemic at the same time through their inherent adaptation measures. In Costa Rica, an AF-funded project is empowering farmers to diversify production for their own supplies and to sell in local markets, while clean water facilities have been established to provide on-site access to villagers in Lao PDR who were previously accustomed to walking long distances for water.

The Fund also adapted early on in the pandemic to arrange virtual meetings and project visits, knowledge products and project flexibility.

“The Adaptation Fund continues to receive high demand for projects and support, and has been very adaptive and responsive to countries’ needs as we continue to effectively serve the Paris Agreement on the eve of its 5th anniversary, through the Fund’s tangible actions on the ground, growing strategic pillars of Action, Innovation and Learning, and empowering country ownership in adaptation,” said Mr. Mikko Ollikainen, Manager of the Adaptation Fund.

The Board received record highs in new proposals for its March 2019 Board meeting as well as its June 2020 intersessional review period, and has an active project pipeline of about US$ 280 million. It also approved a record US$ 188 million in new projects last year. This led to the Board deciding recently to increase its resource mobilization target for 2020 by a third to US$ 120 million, while noting more would be welcome and needed for projects in the pipeline.

Since it began formally serving the Paris Agreement nearly two years ago, the Fund solidified its institutional arrangements and received a record 11 contributions from national and regional governments in 2019 — including the first multi-year commitment to the Fund. In conjunction with the 5-year anniversary of the Paris Agreement, the Fund will convene a virtual Adaptation Fund Contributor Dialogue for Ambition in Adaptation Finance Dec. 14, where governments are expected to speak about new contributions for the Fund.