Sharm El-Sheikh, Egypt (November 15, 2022; Updated Nov. 18 and 28) – The second week of the UN Climate Change conference (COP27) in Egypt brought some welcome news for the Adaptation Fund and the climate-vulnerable developing countries the Fund serves, as contributors announced about US$ 232 million in new pledges and contributions.

Several announced pledges during the Fund’s annual Contributor Dialogue, held at the Egypt Pavilion at the conference, while others were announced during other high-level segments earlier or after the event. The news coincides with the 15th anniversary of the Fund’s launch, which is also being celebrated at the conference.

“Accelerated adaptation action is needed as we face unprecedented climate change challenges, and the Adaptation Fund is a source for optimism,” said Adaptation Fund Board Chair Mr. Albara Tawfiq. “We thank all of the contributors, as these dollars will be well spent to build resilience and make a tangible difference on the ground through tangible projects and programmes that are tailored to local adaptation needs in the most vulnerable countries.”

The pledges and contributions will help reach many more vulnerable communities adapt to climate change through concrete adaptation solutions, while also helping address record demand as the Fund has an active project pipeline of unfunded projects that has risen to about US$ 380 million. 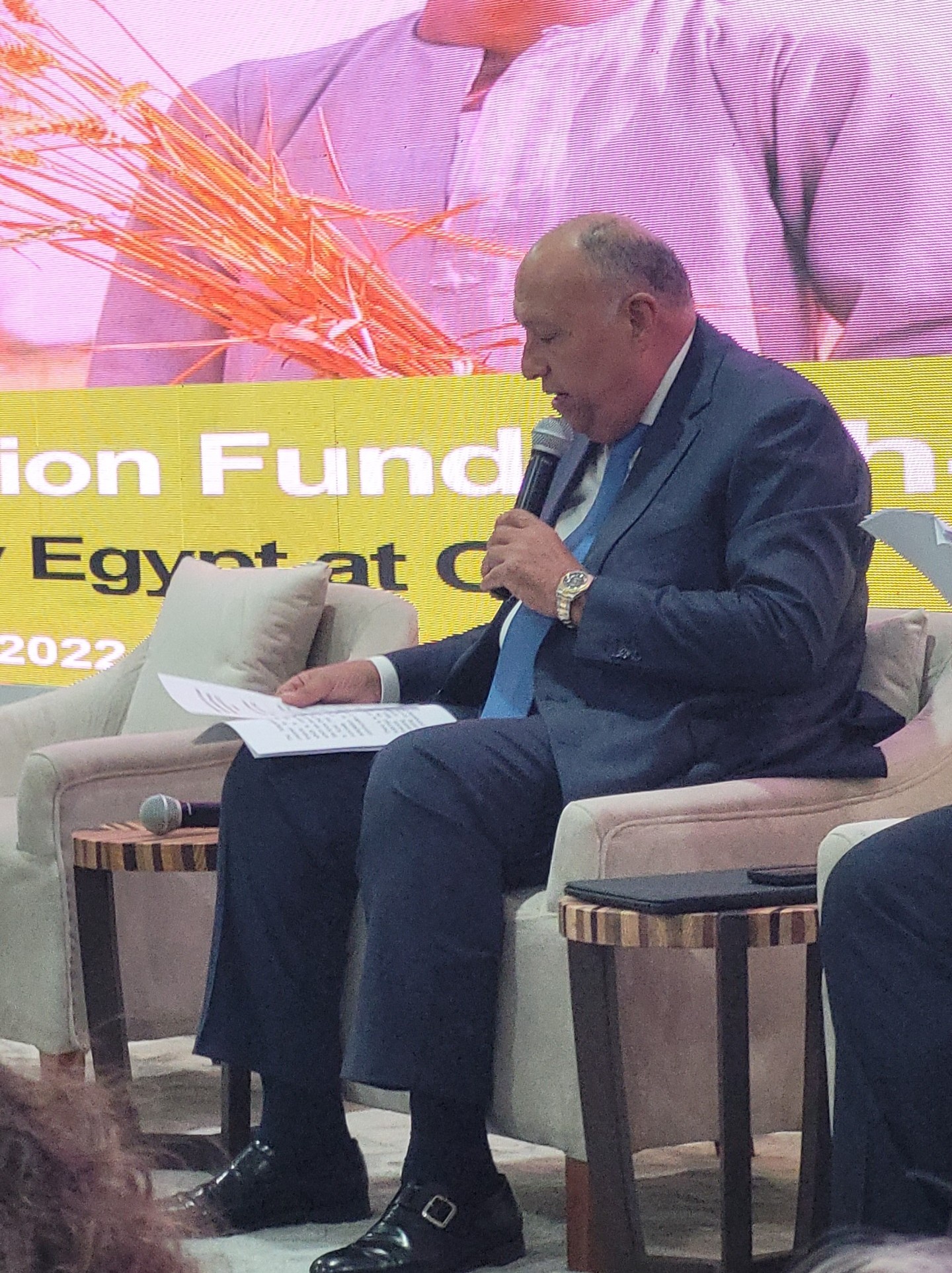 During the dialogue, Egyptian COP27 President H.E. Mr. Sameh Shoukry, Minister of Foreign Affairs, praised the Fund for the two successful food and water security projects it is funding in Egypt, the first of which was scaled up into the second project. He said there is “no doubt” the Fund has provided the delivery of concrete adaptation projects, scalable actions, and direct access funding that empowers country ownership in adaptation. “The Adaptation Fund is a key channel for delivering adaptation finance to developing countries. It provides grants for adaptation to the most vulnerable communities in developing countries,” he said.

Citing the commitment by developed nations in the 2021 Glasgow Climate Pact to double adaptation finance to developing countries by 2025 and international reports that show adaptation needs of vulnerable countries are headed to US$ 300 billion a year by 2030, Mr. Ovais Sarmad, Deputy Executive Secretary of UN Climate Change, said Parties must build on the progress already made to respond to the widespread damage climate change is causing throughout the world. “Considerably greater action is needed,” he said. “We have no time to lose. This COP is all about implementation. Adaptation saves lives and gives big dividends.”

Germany has been the largest contributor to the Fund, with over US$ 500 million contributed since 2010. “We need to make sure that finance benefits those who need it the most,” said H.E. Ms. Jennifer Morgan, State Secretary and Special Envoy for International Climate Action in Germany during the Fund’s dialogue, adding that the Fund’s work in locally led adaptation and in approving its new Medium Term Strategy for 2023-2027 have been pivotal. “We are really delighted to see how the Adaptation Fund is evolving.” 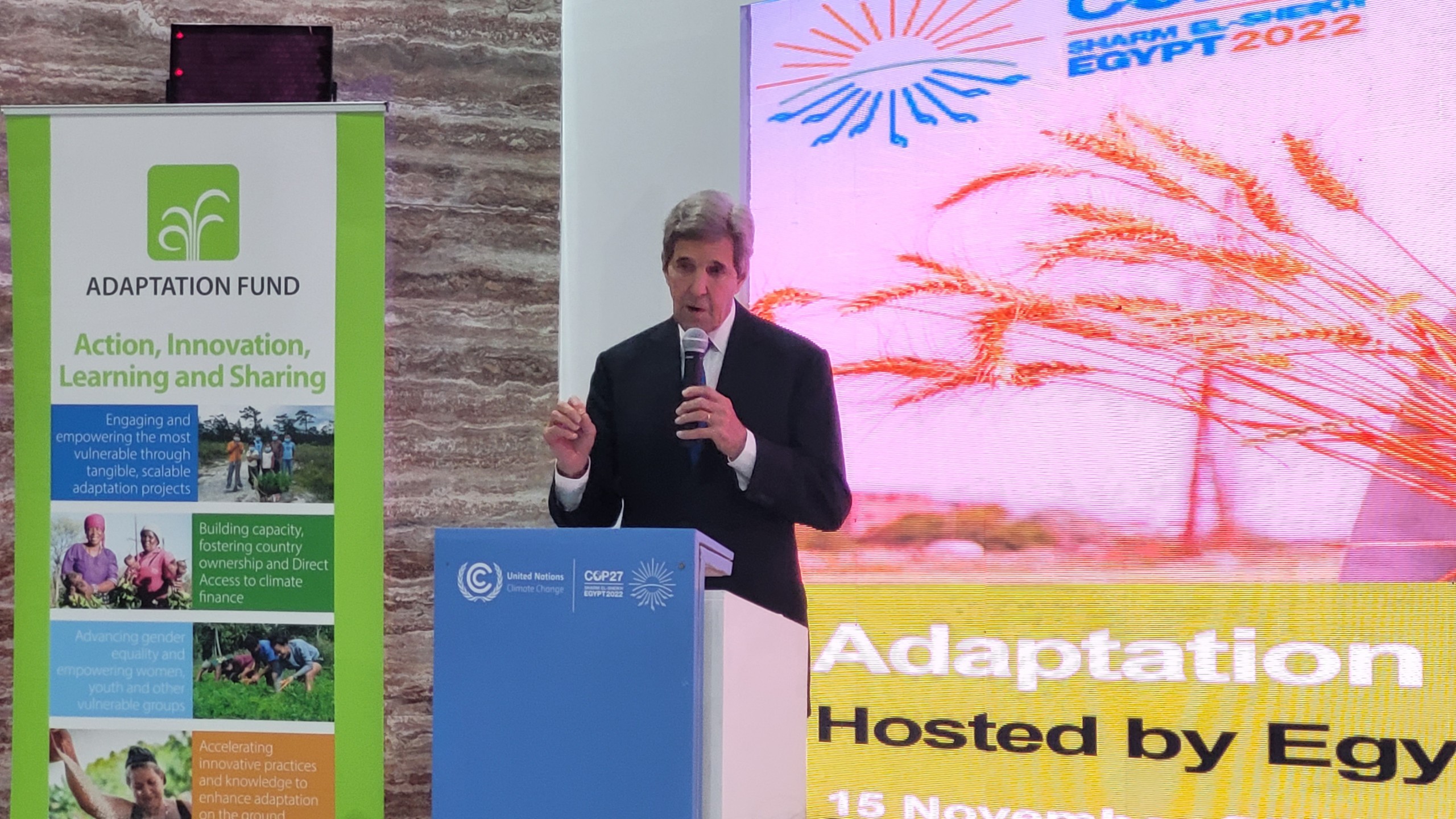 In reaffirming President Joe Biden’s pledge made earlier in the conference to double U.S. support for the Fund from its first US$50 million pledge made last year to US$ 100 million, H.E. Mr. John Kerry, U.S. Special Presidential Envoy for Climate, said the U.S. is going to work with all countries to accelerate and scale up adaptation and mitigation. “The Adaptation Fund is already proving itself to be remarkably effective,” he said. “This is one of the most effective ways to do things. Countries love this [Fund] because it’s flexible and effective.”

Spain’s new pledge to the Fund acknowledged Spain’s membership on the Board from early on and followed its 30 million EUR pledge to the Fund last year. Ms. Valvanera Ulargui, Spain’s General Director of Climate Change, said it is very important to show progress in carrying out the Glasgow Impact and that Spain would like to help spread the message of the good work of the Fund.

France’s new pledge followed prior pledges made several years ago. “The Adaptation Fund is a really key part of the whole [climate finance] architecture,” said H.E. Mr. Stephane Crouzat, the French Ambassador for Climate Change. “We like it because of Direct Access [which empowers country ownership and builds national capacities], and grants are 100 per cent financed by the Fund. We like the concept.”

Ms. Ali Carlin, Lead Advisor on Climate Change for New Zealand’s Ministry of Foreign Affairs and Trade, said at the dialogue that climate change is affecting harshly small island developing states and others, and that the Adaptation Fund is a key programme that supports climate change adaptation projects globally to help vulnerable communities adapt.

Switzerland also continued its support to the Fund through a multi-year pledge it made starting last year. H.E. Ms. Yvonne Baumann, Ambassador of Switzerland to Egypt, said year to year vulnerable countries are experiencing worsening climate impacts. She commended the Fund’s new 5-year strategy through its pillars of Action, Innovation and Learning and Sharing, its locally led actions, and decentralized approaches. 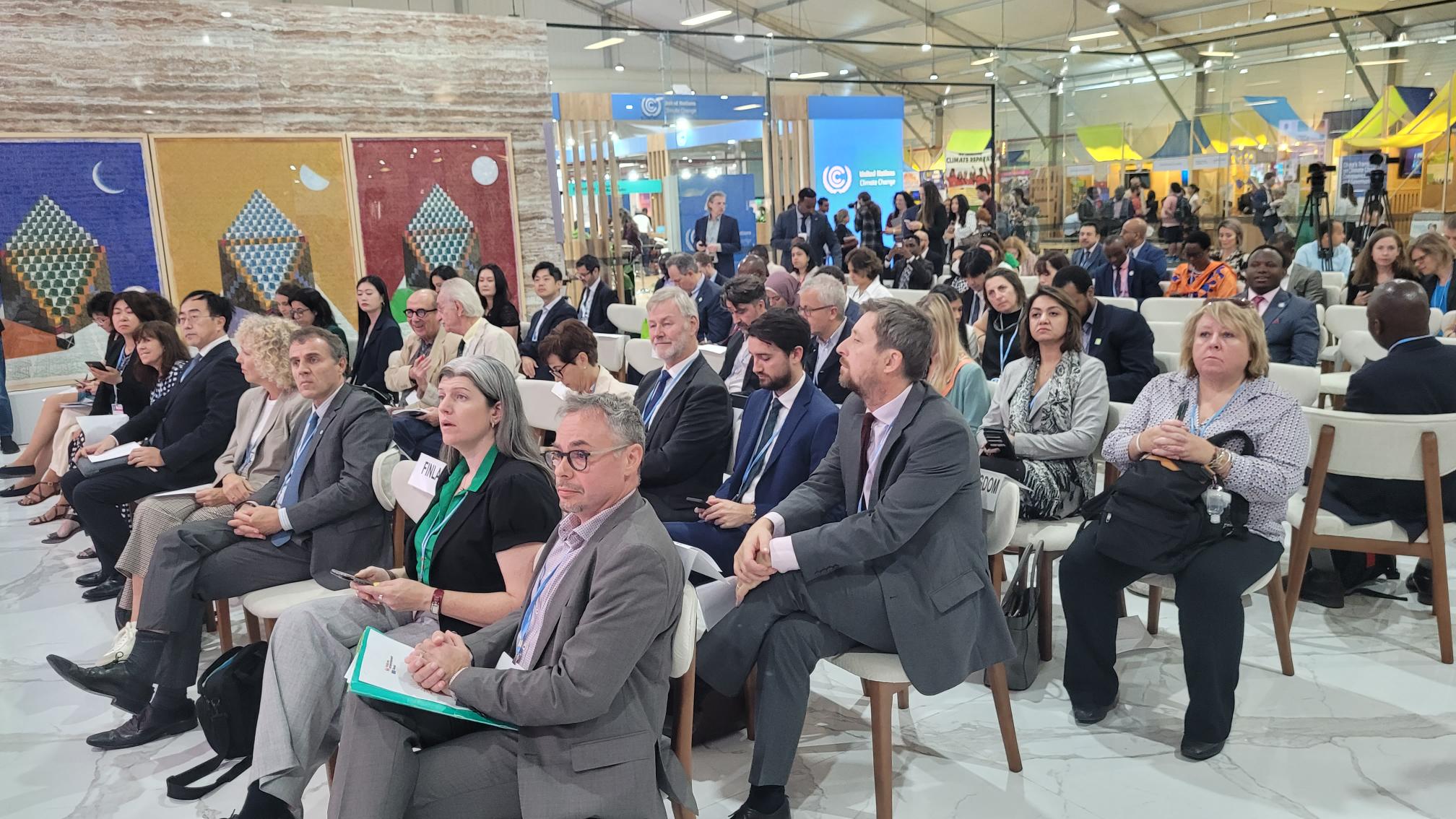 The Government of Quebec’s new pledge will build further on its previous pledges to the Fund. “The Fund provides real benefits to those who are most in need,” said H.E. Mr. Benoit Charette, Quebec’s Minister of Environment, Climate Change, Wildlife and Parks.

Following up on a US$ 6 million pledge it made to the Fund earlier this year, Japan announced an additional US$ 6 million contribution. “One of the strengths of the Adaptation Fund is it allows developing countries to implement concrete adaptation projects and build country ownership through Direct Access,” said Mr. Takeshi Akahori, Director General for Global Affairs in Japan’s Ministry of Foreign Affairs.

In announcing its new pledge, H.E. Mr. Philippe Henry, Minister for Climate, Energy, Mobility, Infrastructure and Vice-President of the Government of Wallonia in Belgium, thanked the Fund for its work during the dialogue. “You are leading the way in local and scalable projects and programmes and locally-led adaptation,” he said.

In announcing its first pledge to the Fund in several years, Mr. Helmut Hojesky, Head of the Austrian delegation, said Austria  has always attached great importance to adaptation, especially financial support for the most vulnerable countries.

In announcing Republic of Korea’s first pledge to the Fund, Ms. Kyunghee Kim, Director General of Development Finance in the Ministry of Economy and Finance of the Republic of Korea, said Korea joins the community of contributors to the Fund at a pivotal point when adaptation challenges continue to rise. “Korea will be making a first contribution to the Adaptation Fund,” she said at the dialogue. “Hopefully this helps further our collective goals.”

H.E. Mr. Nick Bridge, UK Foreign Secretary’s Special Representative for Climate Change, said at the dialogue that the Fund carries a pioneering appeal through its funding of small-scale tangible projects that are building capacities of vulnerable communities, and its focus on the most vulnerable countries.

Ms. Diana Acconcia, Director for International Affairs and Climate Finance, Directorate-General for Climate Action of the European Commission, added that the Fund has already been recognized as a pioneer in adaptation through its innovative modalities and concrete solutions to help vulnerable communities adapt.

Meanwhile, H.E. Mr. Conrod Hunte, Ambassador and Lead Negotiator for AOSIS from Antigua and Barbuda, which has a Direct Access project financed by the Fund that is helping vulnerable communities climate-proof their homes while enhancing drainage systems and access to storm shelters for the most vulnerable, praised the Fund for its nimbleness and responsiveness to countries’ needs, while also furthering innovation in adaptation and transformative project scale-ups. “The Adaptation Fund has really pushed the bar in adaptation and adaptation finance,” he said. “Direct Access is a very important thing to us because it allows developing countries to receive and implement adaptation finance. It also gives you the ability to innovate and deliver small scale local adaptation actions.”

Since 2010, the Adaptation Fund has committed over US$ 998 million for climate change adaptation and resilience projects and programmes, including 139 concrete, localized projects in the most vulnerable communities of developing countries around the world with over 38 million total beneficiaries. It also pioneered Direct Access and Enhanced Direct Access, empowering countries to access funding and develop local projects directly through accredited national implementing entities.