Adaptation Fund Year in Review: 2018 Key Highlights and Accomplishments with a Peak Ahead to 2019

The Adaptation Fund had an extremely productive and successful milestone year in 2018, helping the most vulnerable communities of developing countries adapt and build resilience to urgent climate change needs. It culminated in a momentous decision recognizing the Fund’s excellent work and the credibility and trust it has earned over the past 11 years when member countries of the Paris Agreement at the COP 24 Climate Change Conference in Poland in December decided the Fund ‘shall serve’ the Paris Agreement. The Fund also shattered it’s single-year resource mobilization record with US$ 129 million in new pledges received.

Earlier in the year, a second phase of an independent evaluation verified the Fund’s excellent work as relevant, efficient and effective. The Fund further continues to receive record demand for its work, reflecting the urgency of climate adaptation. It received US$ 264 million in requests for project proposals at its October board meeting alone. The Board also approved an implementation plan for the Fund’s five-year Medium-Term Strategy, and launched three new grant funding windows to accelerate action, innovation and learning in adaptation on the ground.

In an effort to help more developing countries gain access to climate finance under the Fund’s pioneering Direct Access modality, the Fund also launched a pilot ‘Readiness Support Package’ and organized an annual climate readiness workshop with 25 National Implementing Partners to share practices from the field.

The Adaptation Fund is well-poised to continue to serve the goals of the Paris Agreement and those most vulnerable to climate change through its concrete adaptation actions on the ground, building country adaptive capacities through its pioneering Direct Access modality, and its innovative strategic approaches in 2019 and well beyond.

Here are some of our 2018 milestones:

December 2018 – In a momentous decision that recognizes the important role of the Adaptation Fund in climate finance, the 197-member Conference of the Parties serving as the meeting of the Parties to the Paris Agreement (CMA) decided into an extended Saturday evening of the COP 24 climate change conference in Poland that the Adaptation Fund “shall serve” the Paris Agreement. Read more 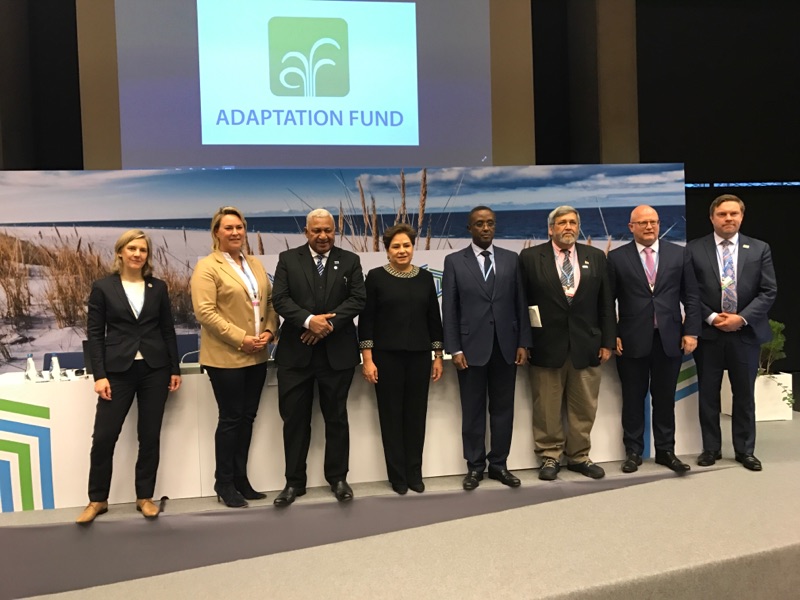 Contributor Dialogue and Reflections from Developing Countries at COP 24

December 2018 – In a powerful nod of recognition to the Adaptation Fund’s effective and tangible work on the ground for the most vulnerable countries and a strong signal of raising global ambition for urgently needed adaptation finance, several contributor governments announced new funding commitments to the Fund at its Contributor Dialogue on Dec.11 at the COP 24 climate change conference. Pledges were received from Germany, France, the European Commission, Italy, Sweden, the Walloon and Brussels-Capital Regions of Belgium, New Zealand and Ireland. Read more

December 2018 – Excellent results were demonstrated from an innovative Visa platform and partnership with UNFCCC, where nearly 20,000 taps (19,723) resulted in US$ 67,453 generated for the Adaptation Fund during the COP 24 climate change conference in Katowice, Poland to support the Fund’s mission in helping vulnerable communities in developing countries adapt to climate change and demonstrate the potential of creative crowdfunding sources. Read more

Tweets of the Year

Pleased to learn that that the @adaptationfund has broken its single-year resource mobilization record with nearly USD 129 million in new pledges received https://bit.ly/2Elbr1h However, greater ambition is still needed to scale up #ClimateFinance. #COP24 pic.twitter.com/4BQppdSTCv

Finally the decision has been made! Now the AF can be scaled up further to deliver high priority adaptation support to the most vulnerable countries @adaptationfund. A former chair (two times) and board member for ten years is very pleased!

November 2018 – This video focuses on the AF’s pioneering effective actions on the ground based on the themes of Immediate Value, Innovation, Collaboration and Wider Change. The Fund’s collaborative efforts with its implementing partners that lead to wider changes in project countries and regions are highlighted, along with its important role in serving the Paris Agreement. AF project beneficiaries, implementing partners and stakeholders share their views and experiences on the work of the Fund. Watch video

October 2018 – A new report from the top international body on climate change science highlighted the urgency to accelerate mitigation and adaptation activities to help avoid potentially “long-lasting or irreversible” climate impacts, including the complete “loss of some ecosystems”. Read more

August 2018 – A record high amount of funding of US$ 264 million was requested by implementing entities under the call for proposals that were considered at the 32nd meeting of the Adaptation Fund Board (AFB) in October 2018. This was an increase of over one-fourth (US$ 55.5 million) from the previous record in 2016 (US$ 208.5 million). Read more 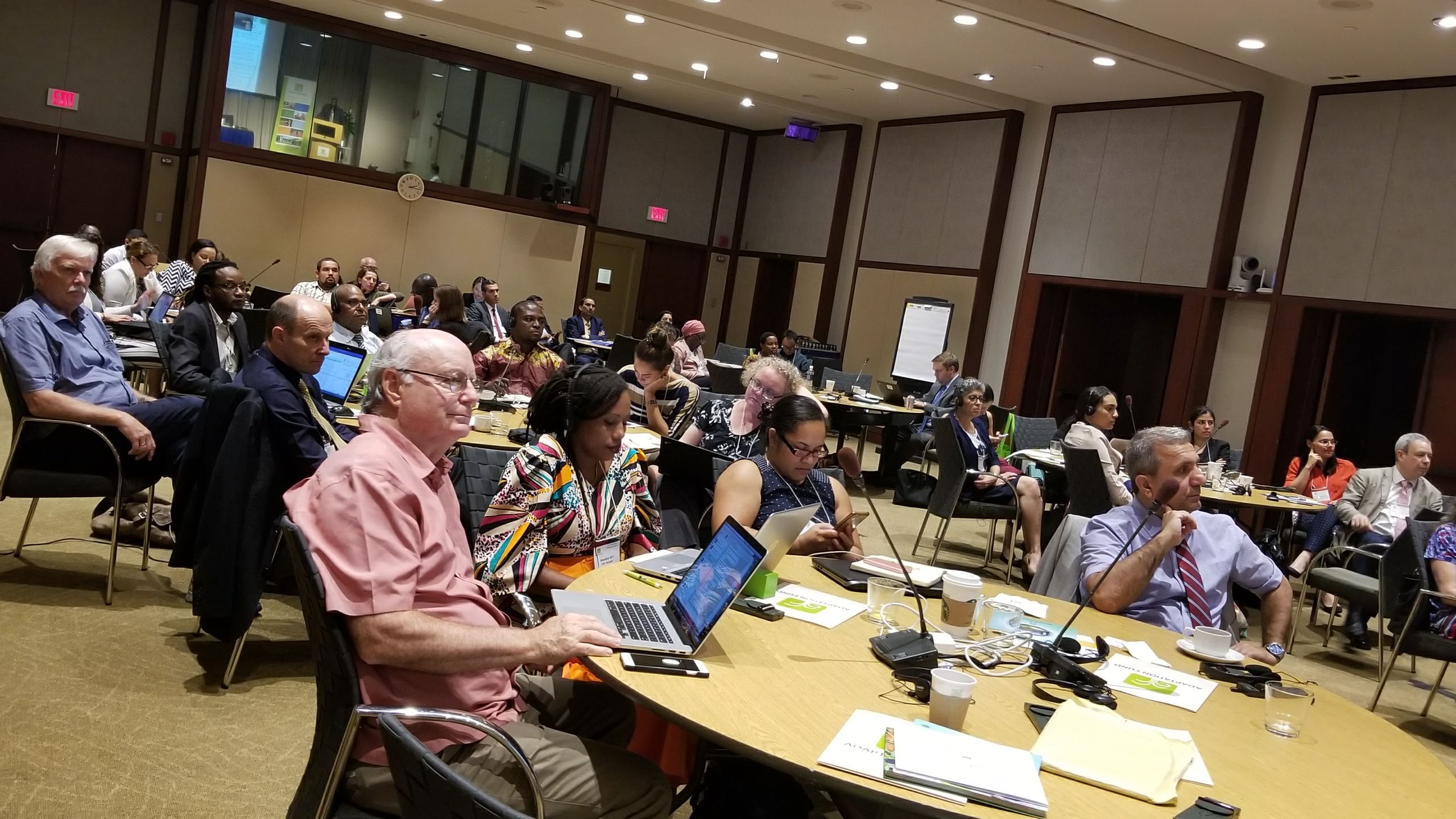 August 2018 – Knowledge sharing is a pivotal aspect of the rapidly evolving global climate finance space, and one of the growing pillars of the AF’s work as it shares valuable experiences from its actions across the world that are often breaking ground in climate change adaptation in the most vulnerable places for the first time. Read more

June 2018 – The second phase of the overall independent evaluation of the Adaptation Fund was completed, with the Fund’s portfolio of projects and programmes receiving high marks for  their relevance, efficiency and effectiveness. The evaluation concluded the Fund “adds value” to climate finance with its exclusive focus on concrete adaptation actions and building country capacities through Direct Access. Read more

March 2018 – Among the key decisions of the Adaptation Fund Board during its 31st meeting on the UN Campus in Bonn, Germany were the approval of an implementation plan for its five-year Medium-Term Strategy (MTS) that calls for the creation of new grant funding windows that support the strategy’s pillars of Action, Innovation and Learning and Sharing. Read more