Damaris Sánchez and other local beneficiaries from the Chiriquí Viejo watershed participated in stakeholder consultations as part of the AF project “Adapting to climate change through integrated water management in Panama.”

Washington, D.C. (October 15, 2021) — As the Adaptation Fund (AF) has grown rapidly into a US$ 1 billion fund over the last several years to respond to the urgency of climate change and serve the goals of the Paris Agreement, it has reached nearly 125 concrete adaptation projects on the ground while offering additional funding windows to scale up projects, and foster innovation and learning in adaptation. It is further building on some of its early pioneering finance modalities such as Direct Access and Enhanced Direct Access that build country ownership and local leadership in adaptation, while also contributing to build broader resilience in the face of the COVID-19 pandemic.

As it continues to grow and face consistently high demand, the Fund’s policies have evolved concomitantly, aiming for the highest international ethical standards — with careful attention paid to putting measures in place for transparency, inclusivity, fiduciary standards, anti-money laundering and counter financing of terrorism, as well as environmental, social and gender principles. Under the Fund’s policies, the Fund has proclaimed a zero-tolerance policy for fraud and corruption and put in place requirements to ensure the Fund’s resources are used for their intended project purposes.

With projects being country-led and embracing locally-led community-based adaptation that serves the most climate-vulnerable countries, it is crucial that these principles are honored to ensure projects are the most effective and grounded in human rights, and enhance equitable access to benefits.

AF was progressive in establishing Environmental Social and Gender Policies as far back as eight years ago, which it updated in 2016 and 2021 respectively. A Grievance Mechanism embedded in the environmental and social and gender policies requires all 56 of its implementing entities to have their own grievance or complaint-handling mechanism which provides people affected by AF-funded projects an accessible, transparent, fair and effective process for receiving and addressing complaints about environmental, social and gender harms caused by any project.  Implementing entities are also required to have in place anti-corruption hotlines, independent investigatory functions, whistleblower protection and sanctions policies for corruption and fraud.

The grievance mechanism can be pre-existing, national, local, institution- or project-specific. Under the policy, fully-developed project or programme documents must include a description of a grievance mechanism, which is accessible by employees and affected communities. It is designed to receive and facilitate grievances in a transparent manner and be commensurate to the complexity of risks. Prior to developing project proposals, each implementing entity must meet these requirements to achieve AF accreditation and reaccreditation.

If grievance mechanism complaints related to specific projects fail to reach a mutually satisfactory solution through the implementing entity’s grievance mechanism within a year, anyone who lives in a project area and believes they are adversely affected by its implementation can submit a written complaint at any time through the Fund’s ‘Ad-Hoc Complaint Handling Mechanism’ (ACHM), and any eligible complaints would be addressed in a timely manner.  These are taken seriously and can be submitted confidentially in writing in any UN language by mail or to afcomplaints@adaptation-fund.org. A sample form for a project or programme complaint to the Adaptation Fund can also be used.

An individual or group can also submit a complaint related to financial mismanagement, corruption, fraud or unethical dealing directly to the Fund through afbsec@adaptation-fund.org. While the AF Secretariat independently manages all aspects related to these complaint mechanisms, it reports directly to the Fund’s Board on the handling of all complaints and the Board can require further independent investigations as needed.

The Fund’s Environmental and Social Policy (ESP) has 15 principles that guide all AF-funded projects and programmes, which include fostering human rights, vulnerable groups, youth, biodiversity, natural habitat conservation, climate change and pollution reduction, among others. Its Gender Policy and Action Plan fosters equal rights and opportunity among women and men, as well as empowerment of women and girls.

“Safeguards protect against human rights abuses by ensuring that climate programmes and policies supported reflect the concerns of those most affected. The Paris Agreement should follow (and where possible, improve upon) the examples set by other climate mechanisms that have adopted strong safeguards, such as the Adaptation Fund,” wrote John Knox, Former UN Special Rapporteur for Human Rights and the Environment, in a 2016 letter calling the Fund’s ESP policy a strong and exemplary model aligned with international standards.

AF has other robust processes in place that monitor and evaluate its work, which contribute to fostering its growth while maintaining the strongest ethical standards.

Implementing entities are required to have comprehensive policies and systems in place for fiduciary integrity such as internal control frameworks and international best practices in procurement. The Fund has a strong AF Risk Management Framework and AF Operational Policies and Guidelines, in which the Board may review or evaluate the performance of implementing entities and even consider suspending or cancelling an accreditation due to misrepresentation or intentional provision of false information; substantive changes of fiduciary standards, capacity or commitment to comply with ESP; or misuse of project resources.  The Board also may review or evaluate the performance of projects, and take action if needed such as suspension of the transfer of funds and suspension or cancellation of projects.

According to a 2018 German Watch report, “The Adaptation Fund has made progress in setting itself high standards for accountability and integrity, such as its adoption of a zero-tolerance policy on corruption and introduction of a complaint-handling mechanism. The Fund follows several international best practices related to its policies on accountability and integrity.”

Implementing entities are likewise required to have ethics policies, a code of conduct, whistleblower protection, a mechanism to address complaints, and conflict of interest policy, which are assessed by an independent AF Accreditation Panel. The Panel also assesses the competency of entities to deal with financial mismanagement and other forms of malpractice and their capacity to address complaints on environmental, social or gender harms.

The Board has its own zero tolerance of corruption and fraud and conflict of interest rules,  which also apply to technical experts, secretariat staff and consultants.  Additionally, the World Bank code of conduct, which includes the highest ethical standards, applies to all AF staff.

Furthermore, AF has received high marks for transparency, with an Open Information Policy  and the World Bank Access to information policy.  To foster transparency, all project and programme documents, performance and evaluation reports, Board and committee documents – unless classified as confidential – are publicized on the AF website.

In fact, a 2017 report from Transparency International recognized the Fund’s best practices including its direct access, fiduciary, access to information and public participation policies.

“The Board’s adoption of a zero-tolerance policy on corruption and a complaints handling mechanism are two major advances. The strengthened capacity of the Fund’s Secretariat, the continued policy to solicit public inputs to project proposals, and the policy to ensure downstream accountability and anti-corruption safeguards in project implementation, also stand out as areas of substantial progress,” the report highlighted.

The Fund also has comprehensive stakeholder engagement policies, which are pivotal to transparency and the successful design, development and implementation of its projects on the ground. Involvement of local stakeholders from very early stages in the planning process to project development, implementation all the way through to completion have made projects more effective, sustainable, scalable and replicable. Early and continual stakeholder and beneficiary engagement has led to successful deployment of projects in places like Senegal, Panama and many others.

Very early and consistent engagement of local stakeholders in the Senegal project against coastal erosion led to its successful implementation and subsequent scale-up opportunities. Meanwhile, the integrity of the Panama project was strengthened through inclusive stakeholder consultative processes that included governmental and local beneficiaries during the development of a proposal to adapt to flooding and develop early warning systems and measures against landslides. “It is imperative that communities have greater participation with the necessary training and information to be able to implement more effective, efficient responses in a timely basis or to take preventive measures. Taking efficient action to any phenomena that can happen at any moment is of the utmost importance,” said Damaris Sánchez, of the Chiriqui Viejo watershed of Panama. 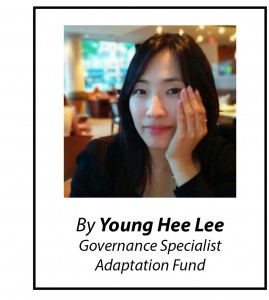 its focus on the most vulnerable through a robust global network that monitors AF-funded projects on the ground. AF also conducts its own knowledge gathering and dissemination together with implementing entities on a regular basis through each project’s knowledge management components and periodic evaluation reports, as well as through Portfolio Monitoring Missions and other case studies.

The commensurate growth and continuing development of the Fund’s safeguards, knowledge, evaluation and monitoring mechanisms is in fact a strong and healthy signal of the Fund’s overall growth!