Washington, D.C. (October 17, 2019) — The Adaptation Fund Board achieved excellent results across a heavy agenda at its 34th Meeting last week, approving over US$ 63 million in grant funding for new projects, including new innovation and project scale-up grants, while advancing its administrative processes and institutional arrangements forward to continue to serve the Paris Agreement smoothly.

The Fund also reached the milestone of 100 approved concrete adaptation projects on the ground.

Among Board approvals were the Fund’s first grants to foster innovation and project scale-ups in adaptation, which are part of its medium-term strategy launched last year that grounds the Fund in the pillars of Action, Innovation, and Learning and Sharing. The new grant windows, which also include learning grants, have been available since last December for the Fund’s national implementing entities (NIEs) under its pioneering Direct Access modality which builds country ownership in adaptation. They are available to NIEs in addition to regular project funding channels.

The new grant window projects approved by the Board include small innovation grants for Armenia (through its NIE, EPIU) and Chile (through its NIE, AGCID), and one project scale-up grant for Rwanda through its NIE, the Ministry of Environment – totaling about US$ 560,000. The Armenia grant is aimed at engaging future leaders through a digital education module on adaptation challenges and best practices for youth, while the Chile grant targets improving water access in emergency situations in a vulnerable province of Valparaiso. The Rwanda grant is aimed at scaling up aspects of an Adaptation Fund project to reduce climate change vulnerability in northwest Rwanda through community-based adaptation.

The Board further approved US$ 10 million for two innovation pilot programmes, which will provide grants to countries that do not yet have Direct Access entities as well as the private sector to foster innovation in several adaptation sectors. These particular grants will be administered by two of the Fund’s multilateral implementing entities (UNDP and UN Environment) that will serve to aggregate them with participation of beneficiary countries. Each window will receive US$ 5 million to administer the grants.

Through its concrete project funding process, the Board approved six concrete adaptation projects totaling over US$ 52 million in Congo, El Salvador, Georgia, Malawi, the Republic of Moldova, and a regional project in Djibouti, Kenya, Sudan and Uganda. 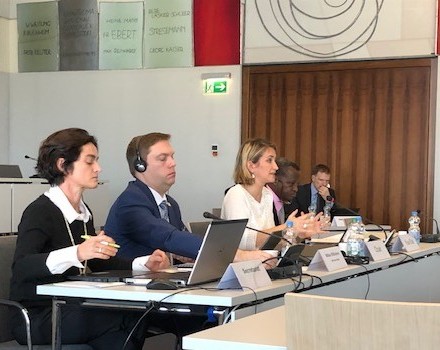 her decisions, the Board decided to streamline the way in which project proposals are reviewed and discussed at its meetings to make the review process more efficient as the Fund continues to receive record demand for its work. The Board has now approved more than US$ 188 million in new project funding this year alone.

The Board also decided to continue steps to enhance coordination with the Green Climate Fund, including improving efficiency of fast-track accreditation and reaccreditation processes, exploring and advancing options for fund-to-fund arrangements, and enhancing ongoing collaboration.

“Despite having a very heavy agenda, I am very pleased with the accomplishments of the Board at this meeting,” said Adaptation Fund Board Chair Ms. Sylviane Bilgischer, of Belgium. “The Adaptation Fund approved six concrete projects to help the most vulnerable countries adapt to climate change, as well as five new grants through the Fund’s new innovative windows to foster innovation and scaling up of projects in adaptation. We also made some important decisions to advance the Fund’s process of smoothly serving the Paris Agreement, and make the project review process more efficient in the face of high demand for climate change adaptation projects.”

The results capped a busy week for the Board over three preparatory days and two official meeting days on the UN Campus in Bonn, Germany.

At the onset of the meeting, Ms. Bilgischer led the full Board to stand in a minute of silence for colleague Mr. Chebet Maikut, of Uganda, who passed away on Oct. 2 and had served on the Board since 2016 representing Least Developed Countries. The Board later elected Mr. Ibila Djibril of Benin as the next Chair of the Board and Mr. Mattias Broman of Sweden as Vice-Chair. They will assume those posts next March.

The meeting featured a dialogue with civil society, in which AF NGO Network members from South Africa, Tanzania and Honduras provided experiences and lessons learned from Fund projects, and input on processes and policies. The Board also advanced discussions of options to further enhance civil society participation and engagement in its work.

“The meeting results propel the Adaptation Fund forward. Between concrete projects and the new innovation and project scale-up windows, 11 grants were approved for adaptation that will benefit the most vulnerable. This calendar year has seen the Board allocate a record amount of funding, over US$ 188 million, which increases the total project portfolio of the Fund to nearly US$ 720 million, and highlights the increasing urgency felt by developing countries in adaptation to climate change. The Board further made decisions that will enhance the Fund’s processes as we head toward COP25 in Chile later this year,” said Adaptation Fund Manager Mr. Mikko Ollikainen.

The Board additionally endorsed another 14 project concepts and pre-concepts, and approved several project formulation and assistance grants to help in project development.