Madrid, Spain (December 13, 2019) — The Adaptation Fund convened a dialogue of contributing governments and others interested in pledging to the Fund during the COP 25 climate conference in Madrid, and succeeded in mobilizing a total of about USD 89 million from 11 different national and regional governments so far for 2019.

These followed recent announcements at the Climate Action Summit in October of contributions from Sweden (USDeq 53 million over 2019-2022, of which USD 13.5 million will be applied to 2019), first-time contributor the Government of the Canadian Province of Quebec (USD 2.2 million) and Spain (USDeq 2.2 million).

Sweden’s four-year pledge marked the first multi-year commitment to the Fund. Poland’s first-time contribution also represented the 21st government to contribute to the Fund, marking a growing range of contributors. Several governments such as Switzerland, Norway and Spain had not contributed to the Fund for several years, so it signalled strong momentum for the Fund since it began serving the Paris Agreement last January and the importance of its concrete, effective and scalable adaptation work on the ground to the most vulnerable countries.

During the Dec. 9 contributor dialogue, government leaders praised the Fund for its value in the global climate finance landscape for its tangible projects that are making positive impacts in the lives and livelihoods of vulnerable communities and for its pioneering Direct Access modality that builds country ownership in adaptation.

Although the amount of resources mobilized nearly meets the Board’s target of USD 90 million for the year, increased climate ambition will need to occur to keep pace with the record demand for projects the Fund has faced over the last several years due to the rising urgency of climate change. This year alone, the Fund’s Board approved USD 188 million in new projects, and the Fund has an active pipeline of another USD 248 million in projects under development. In March 2019, the Board also received a record USD 268 million in funding requests across 40 new proposals.

“Parties under the Paris Agreement recognize that needs in adaptation are significant,” said H.E. Ms. Carolina Schmidt, Minister of Environment of Chile and the COP 25 President, at the dialogue. “We need to increase ambition. One of the current goals of the Paris Agreement is to enhance adaptive capacity and resilience. Since it’s established that the concrete work on the ground of the Adaptation Fund and through Direct Access has been vital to serve the needs of vulnerable countries, it has been a crucial Fund to increase access to climate adaptation to millions of people around the world. Our commitment to climate action should be stronger than ever. The Adaptation Fund is a good example for expanding funding for climate projects. Your support is critically needed to ensure the Fund can deliver effective help to the most vulnerable around the world. Please increase ambition. Thank you. This is the time for action.” 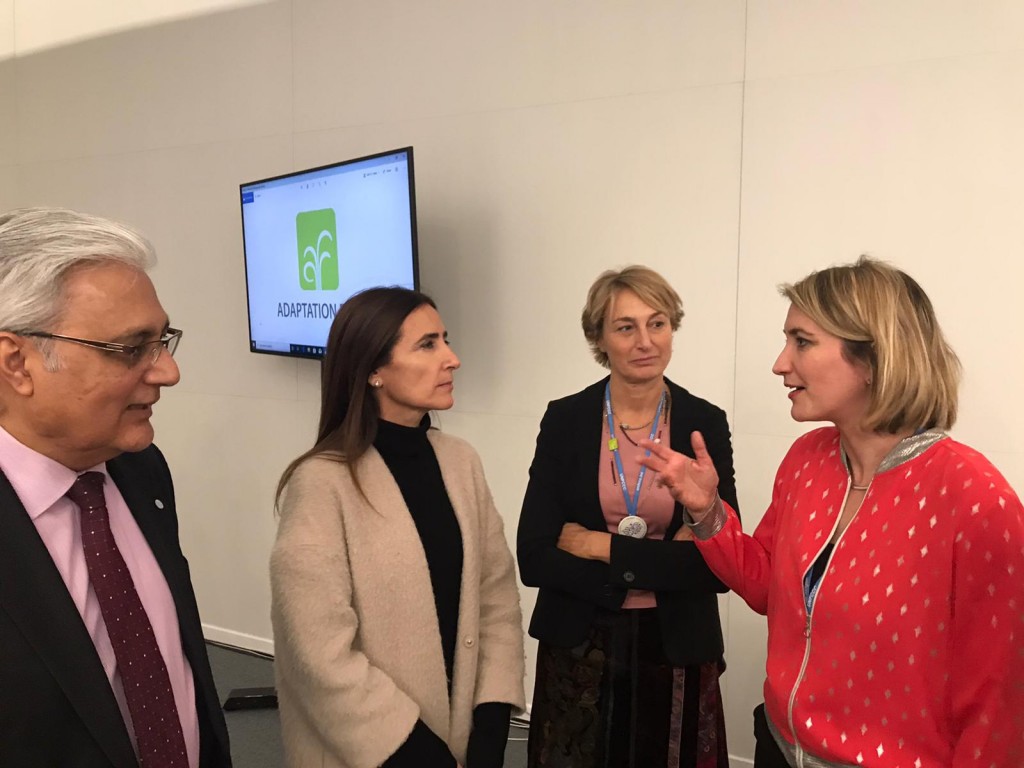 “The Adaptation Fund has delivered much needed adaptation finance to countries and played a crucial role in addressing gaps and building trust and credibility in the process,” said Mr. Ovais Sarmad, Deputy Executive Secretary of UNFCCC. “The Fund speaks to the mandate to help vulnerable countries adapt to climate change, as the need for adaptation has continued to grow. It is using innovative processes such as Direct Access enabling countries to build their own capacities to adapt. The Adaptation Fund is not only needed but is crucial to achieving the Sustainable Development Goals. The results show it has delivered tangible results. Commitments to the Fund have supported [8.7] million beneficiaries in 85-plus countries. I’d like to highlight the urgency to agree on further ways to support adaptation and ensure efforts of the Fund to continue well into the future. Serving the Paris Agreement will help the Fund grow. I’d like to congratulate you all for your support to the Fund. We expect all of you to help.”

Adaptation Fund Board member Ms. Claudia Keller, of Germany — which is the Fund’s largest donor — said the Fund is very close to Germany’s heart and she praised its innovative Direct Access modality and concrete work on the ground. “It is time to act,” said H.E. Ms. Svenja Schulze, Germany’s Federal Minister for the Environment, Nature Conservation and Nuclear Safety, in announcing Germany’s new pledge during the COP 25 High Level Segment. “Germany supports developing countries in climate action. I am here to call for more courageous climate action.”

Sweden, as one of the Fund’s most consistent and strongest contributors, also stepped forward to make a statement with the first multi-year commitment to the Fund.

“I believe we are the first country to enter into a four-year agreement,” said Mr. Mattias Frumerie, Director of the Ministry of Foreign Affairs of Sweden, during the dialogue. “We’d be happy to see other countries joining us in this commitment.”

Switzerland’s new commitments will be applied to 2019. Government officials also expressed optimism about the Fund’s innovative experience with monetizing carbon credits for adaptation finance, which is relevant for the sustainable development mechanism of the Paris Agreement. “Switzerland is committed to supporting adaptation finance, and the Adaptation Fund’s concrete adaptation work for the most vulnerable countries,” said State Secretary Mr. Marc Chardonnens. “We are looking forward to the conclusion of Article 6 negotiations in order to ensure predictable long-term financing of the Fund.”

According to Norway’s Ministry of Foreign Affairs, in announcing its new support to the Fund, “We need to build resilience and ensure adaptation to climate change already impacting millions of people.”

“The Fund has delivered and championed adaptation that meets the needs of the most vulnerable countries, with several example of its projects being scaled up, as well,” said H.E. Mr. Ola Elvestuen, Minister of Climate and Environment of Norway, during the dialogue.

Additionally, as host of COP 25 with Chile, Spain stepped forward recently with solid contributions to the Fund. “The Adaptation Fund has proven to be a successful and innovative example of an innovative instrument channeling resources to the most vulnerable,” said Ms. Teresa Solana, Senior Advisor of Spain’s Climate Change Office, during the dialogue. “We were the first country to make a voluntary contribution in 2010 and we have also been part of the Adaptation Fund Board since its inception. We hope that others will join us in this support. The Fund will contribute in the Paris Agreement, and that means it will be a key instrument in sustainable development. You can count on Spain.”

In announcing its first-ever contribution to the Fund during the dialogue, a representative expressed that Poland is a new donor and would like to continue to support the Fund. During opening statements of COP 25, Mr. Michael Kurtyka, Secretary of State in the Ministry of Environment of Poland and the COP 24 President, said the transition to climate-neutral development is a civilizational challenge that can be overcome only by acting together. “My hope rests in particular with the young people,” he said. “They have the courage to speak up and remind us that we inherited this planet from our parents and we need to hand it over to the future generations.” 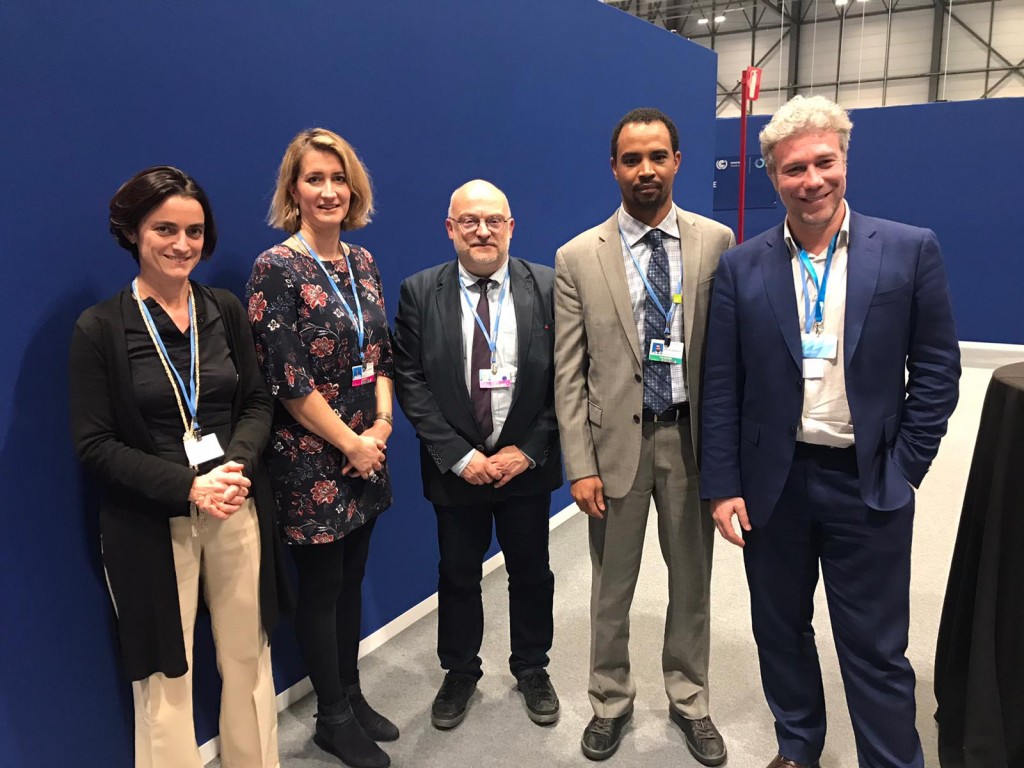 “We are proud to support once again the Adaptation Fund. Climate change strongly impacts the most vulnerable countries and financing adaptation measures is a matter of urgency and mobilization,” said H.E. Mr. Phillipe Henri, Vice President, and Minister for Climate, Energy and Mobility of the Walloon Region.

“The Flemish energy and climate policy is based on ambitious, achievable and affordable measures. A region like ours does not look away from challenges and so we take our responsibility when it comes down to helping out regions who face high costs to adapt,” said H.E. Ms. Zuhal Demir, Flemish Minister of Justice and Enforcement, Environment, Energy and Tourism, in announcing Flanders’ new pledge.

“It is essential to support the most vulnerable countries in the fight against climate change. We are a strong supporter of the Adaptation Fund’s activities. The Fund gives a great support to implement adaptation measures,” said H.E. Mr. Alain Maron, Minister of Climate Transition of the Brussels-Capital Region.

Meanwhile Ireland continued its consistency in contributing to the Fund over the last few years with its new pledge. “Helping those most vulnerable is a key part of Ireland’s Climate Action Plan,” said H.E. Mr. Richard Burton, Minister of Ireland’s Department of Communications, Climate Action and Environment. “As we look to increase climate ambition it is crucial that we support those who will find it most difficult to overcome the devastating impacts of climate change. Ireland is delighted to support the work of the Adaptation Fund again this year helping to protect those most vulnerable with a further contribution of €300,000.”

Adaptation Fund Board Chair Ms. Sylviane Bilgischer thanked the Chilean COP25 Presidency, as well as Spain and UNFCCC for coming together to host this important COP of ‘Action’, and thanked all of the contributor governments for their generous pledges and others who expressed recognition for the Fund’s effective work. “We hope these first pledges will lead to more, both in number and range and length of commitments. It is very important because the Adaptation Fund is in greater demand than ever,” she said. “We have also committed USD 720 million to 100 concrete projects on the ground. Although the Fund still receives a 2% share of Clean Development Mechanism projects, which opens potential innovative avenues in the future through the sustainable development mechanism of the Paris Agreement, it still relies on voluntary contributions. The value of the Fund is secure, and its contributions to building national capacities through Direct Access, its scalable concrete adaptation actions on the ground and innovative new funding windows will contribute to speeding up the actions of the Paris Agreement.” 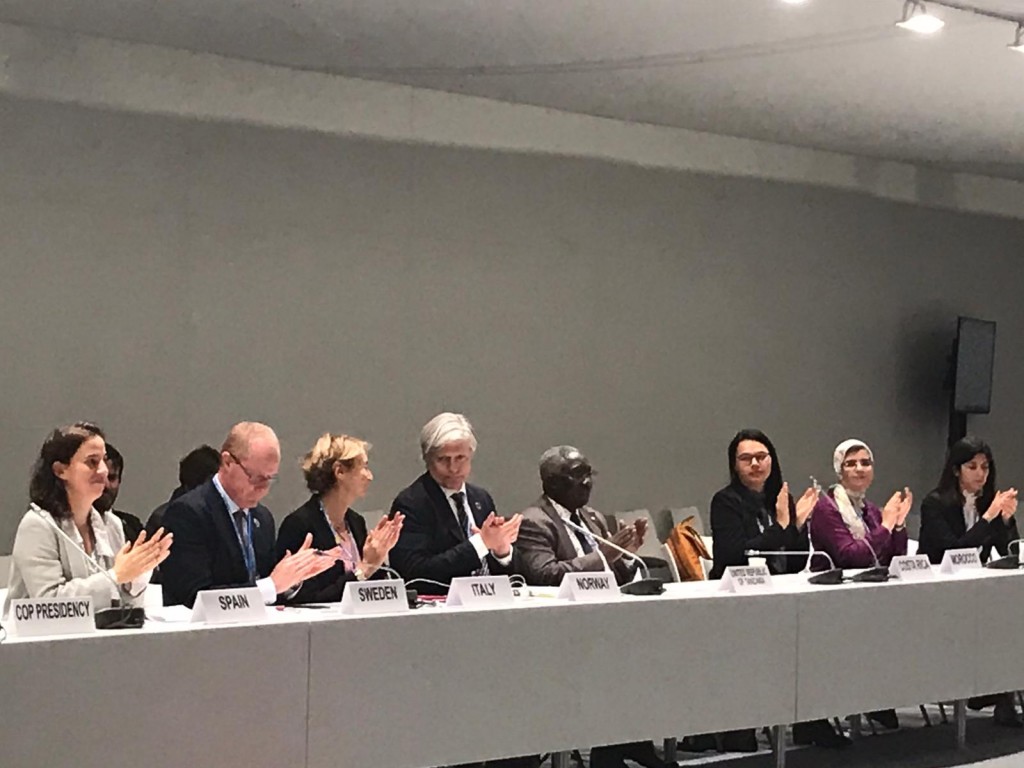 “We are very pleased to continue to expand the contributor base of the Adaptation Fund, as well as receive the first multi-year commitment to the Fund,” said Adaptation Fund Manager Mr. Mikko Ollikainen. “We just about met the single-year resource mobilization target, but will need to continue to increase ambition as well as innovate in our resource mobilization activities to meet the tremendous adaptation needs we continue to face each year, particularly in those countries that are most vulnerable to climate change that are served by the Fund.”

During the dialogue, Dr. Samwel Mafwenga, Director General of the Ministry of Environment of the United Republic of Tanzania, also highlighted the Fund’s project in his country, while representatives from the Fund’s national implementing entities under Direct Access discussed concrete, innovative and effective aspects of Fund projects in Costa Rica, Morocco and Chile.

Since 2010, the Adaptation Fund has committed about USD 720 million for climate change adaptation and resilience projects and programmes, including 100 concrete localized adaptation projects in the most vulnerable communities of developing countries around the world with more than 8.7 million direct beneficiaries. It also pioneered Direct Access, empowering countries to access funding and develop projects directly through accredited national implementing entities.